The Golden Shoe Scheme in 1970 was the 2nd urban redevelopment scheme by the Urban Redevelopment Department (URD) of HDB, the predecessor of Urban Redevelopment Authority (URA). It includes the CBD district along Shenton Way and Raffles Place, forming a shoe-shaped area that gave it its name. URD’s impression of the scheme included a series of podium-and-tower style buildings, with the podiums connected to one another, forming a connection of sheltered walkways on the ground level similar to the five footway concept in shophouses. This feature is still apparent in the area today, even among the newer skyscrapers. The Golden Shoe stood on land reclaimed before the 1950s, along the waterfront of Telok Ayer Basin before further reclamation occurred after 1990. Despite being along the waterfront at the time of initial development, the buildings were oriented to face the main roads instead of facing the waterfront. This signifies a shift in focus in Singapore’s economy from waterfront trading to commercial activities on land.

I made a trip down to the Golden Shoe area, in an attempt to spot buildings and roads built before and under the scheme.

Robinson Road was built in the early 1880s, and named after Sir Francis William Robinson, Governor of the Straits Settlements in the late 1870s. However, the area along the road was only developed from the 1920s. 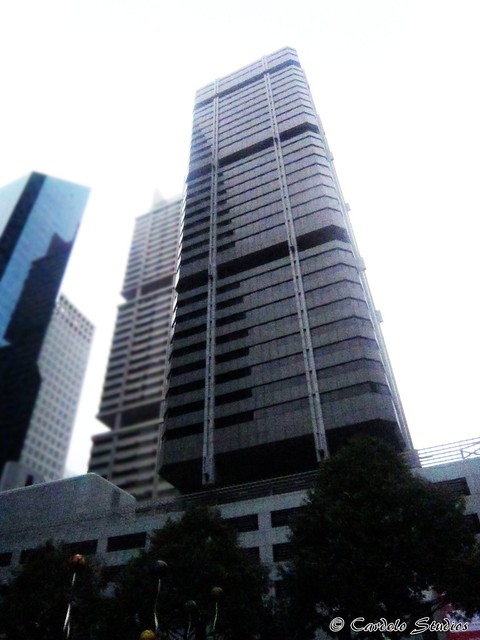 This building, completed in 1976, houses the headquarters of the Central Provident Fund Board (CPF). It received a new cladding in 2001.

The Malaysia-Singapore Airlines (MSA) was a joint venture between the governments of Singapore and Malaysia. It was formed in 1966, and its downtown office building was completed 3 years later, before the initiation of the Golden Shoe Scheme. When the MSA split up into Malaysian Airline System (now Malaysia Airlines) and Singapore Airlines (SIA) in 1972, the building was renamed SIA Building. 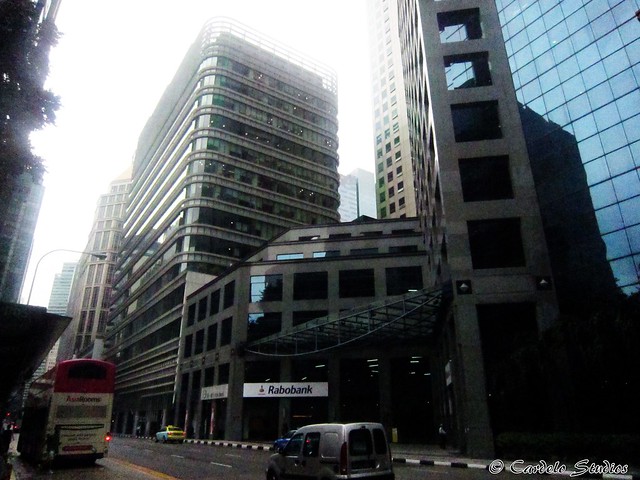 Robinson 77, standing at the original site of MSA (SIA) Building

The SIA Building was torn down and a new building with the same name was built in 1998. It was later renamed Robinson 77. 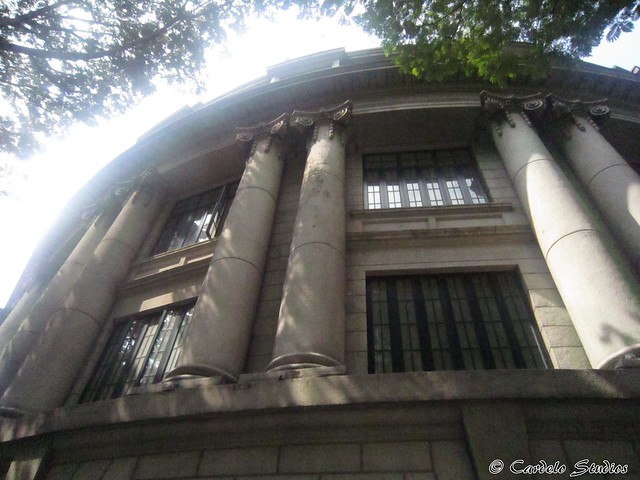 One of the earliest major developments along Robinson Road was the Telecoms Building, completed in 1927. This 4-storey neo-classical building had large coupled columns, recessed balconies and semi-circular arch opening. Throughout its history, it was known by various names. Initially called the Eastern Extension Telegraph Company, it was renamed the Cable and Wireless Building, Telecommunications Authority of Singapore (TAS) Building, and the Ogilvy Centre. 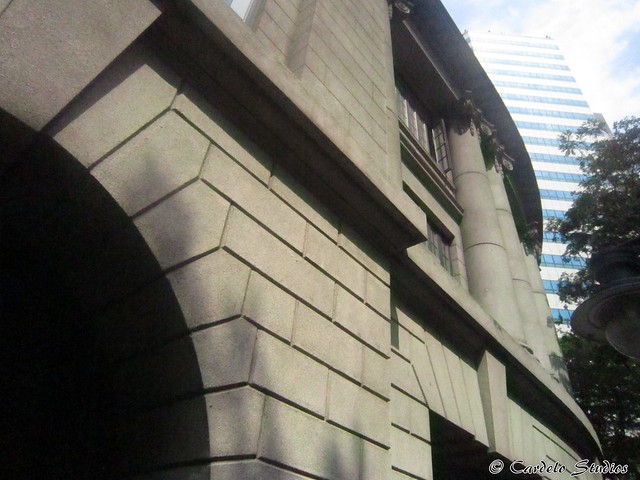 It is one of the oldest existing buildings in the vicinity 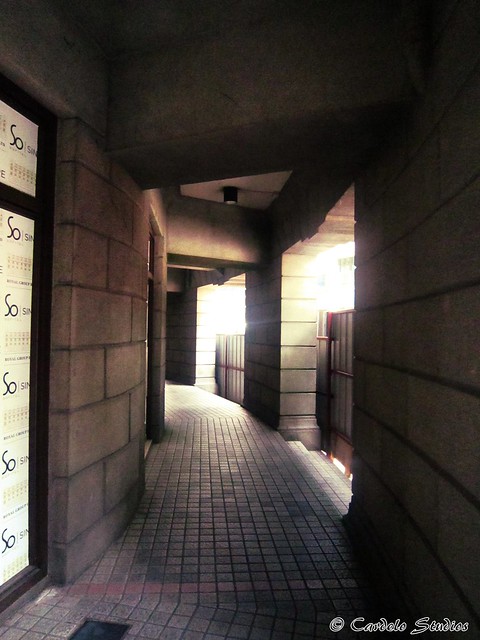 Ogilvy Centre gained conservation status in 2000, and was sold to Sofitel Luxuy Hotels in 2011. It is currently under renovations to become the third hotel in the world under the Sofitel So label. 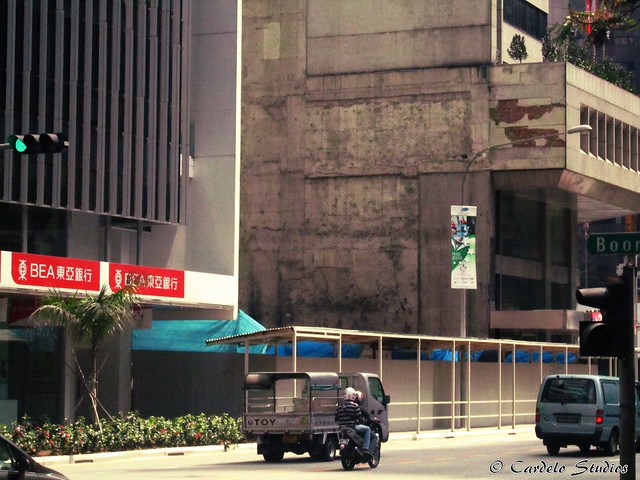 As I walked down Robinson Road, I noticed an empty lot next to the Bank of East Asia Building. A search online revealed it to be the former site for the VTB Building. The building was apparently sold for S$71 million in 2009, and was demolished to make way for the new Robinson Suites, slated to be completed in 2014.

This one-way street that runs anti-parallel to Robinson Road was built in the 1930s but only officially opened in 1951. It was named after Sir Shenton Whitelegge Thomas, Governer of Singapore from 1934 to 1946, to commemorate his decision to stay in Singapore during the Japanese Occupation. He was imprisoned as a prisoner of war in Changi Prison. 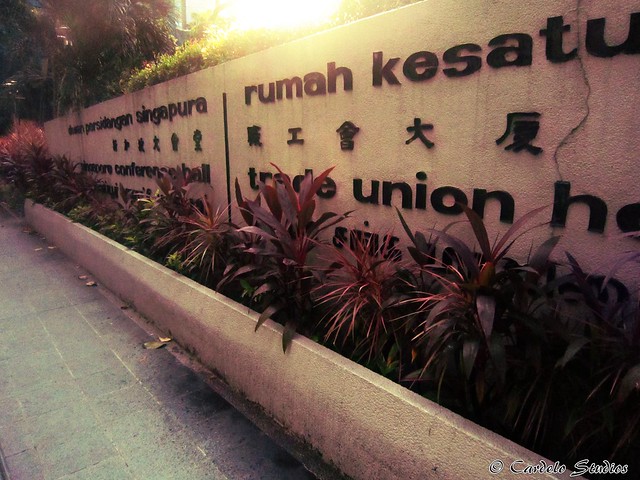 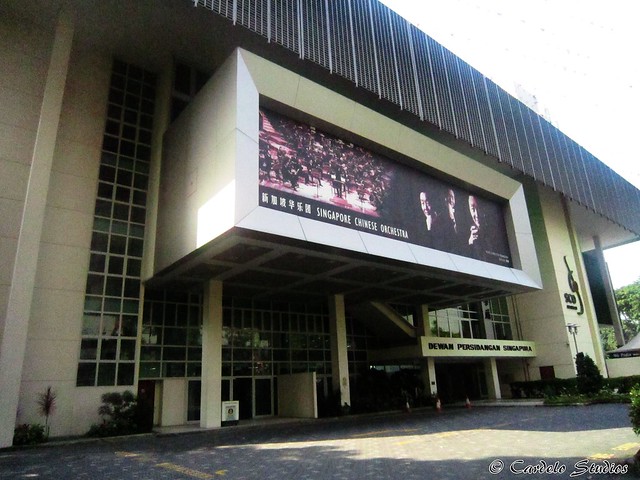 Originally known as the Singapore Conference Hall and Trade Union House, it was a result of an electoral promise made by the PAP to trade unions. The gridded avant-garde design emerged from a government-held design competition in 1961, and was declared open shortly after Singapore’s independence. It was the first building along Shenton Way, and is representative of the Singapore urban architecture in the 1960s and 1970s. It was originally designed to be naturally ventilated, but was eventually made air-conditioned. 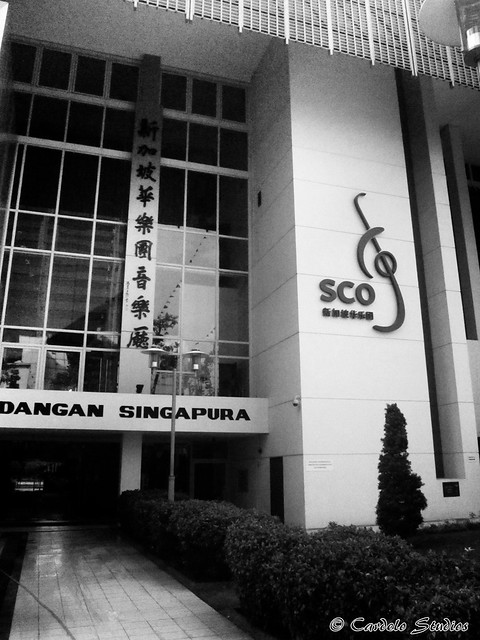 Home of the Singapore Chinese Orchestra

The National Trade Union Congress moved out in the 1990s, and the conference hall is now home to the Singapore Chinese Orchestra. It was declared a national monument on 2010. 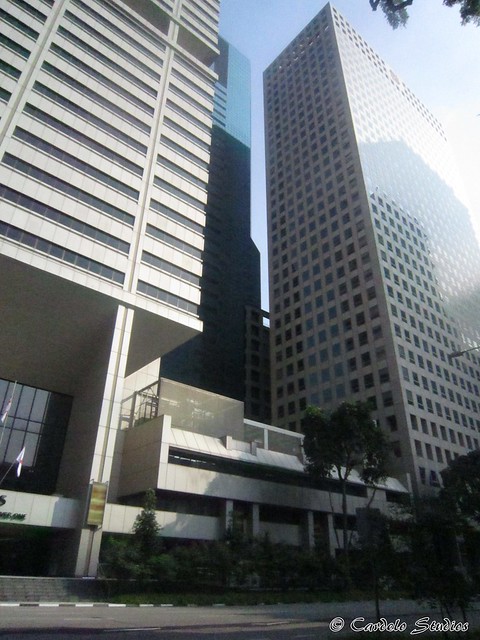 In 2010, Overseas Union Enterprise (OUE) bought over the building. Just a day before I posted this (August 3, 2012), DBS officially moved out of the building, into its new headquarters at Marina Bay Financial Centre.

The old building is currently being refurbished as OUE Downtown. 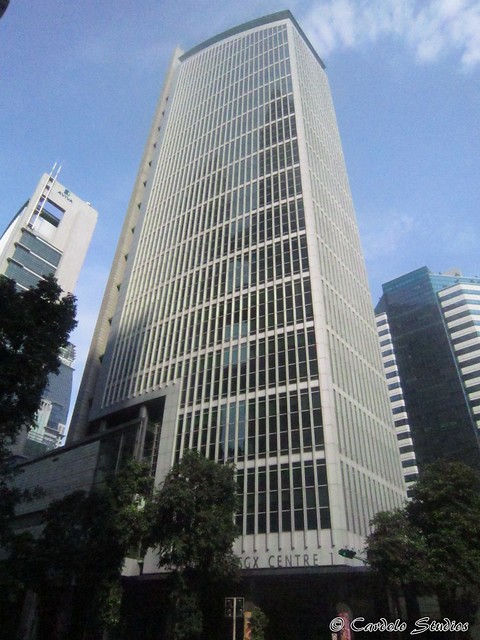 Originally known as the ICB Building, it was completed in 1974, but was torn down in the 1990s to make way for the SGX Centre. 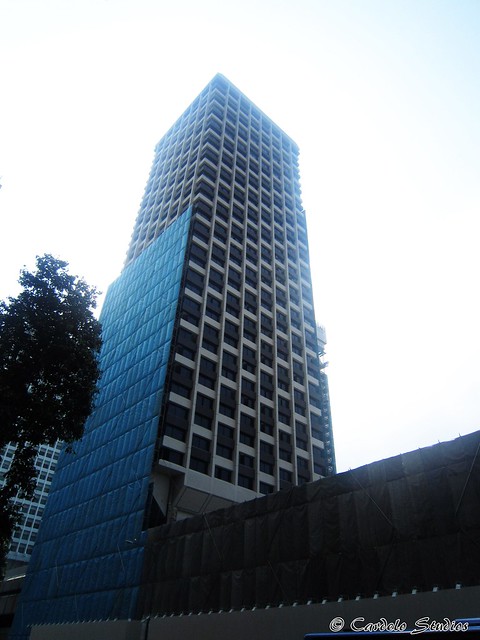 Completed in 1973, the building by the United Industrial Corporation Limited tied with Meritus Mandarin Singapore Tower Two as the tallest building in Singapore. It stood at 152m tall with 40 storeys. It was renovated in 1986 with a new concrete brutalist façade. It is currently being torn down to make way for the new commercial and residential development by UIC known as V on Shenton. 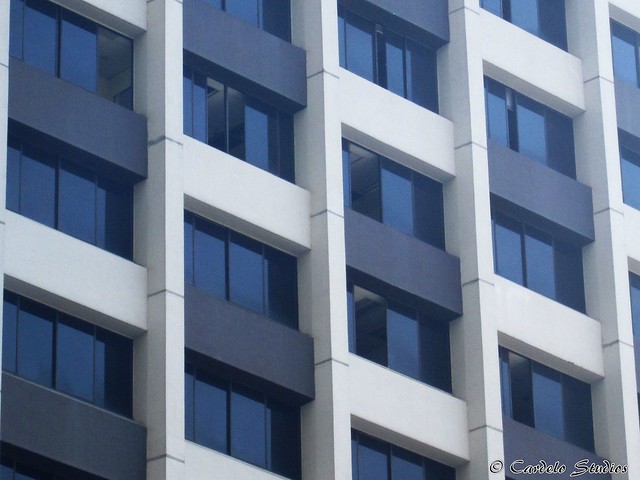 The demolition site recently made headlines when part of the podium collapsed. 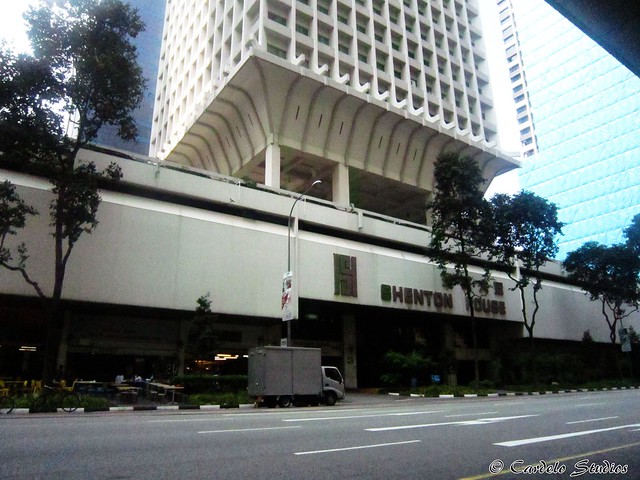 This 1974 building, together with the UIC Building and Robina House, were three iconic podium-and-tower developments in the 1970s, built side-by-side along Shenton Way with their backs facing the Telok Ayer Basin. 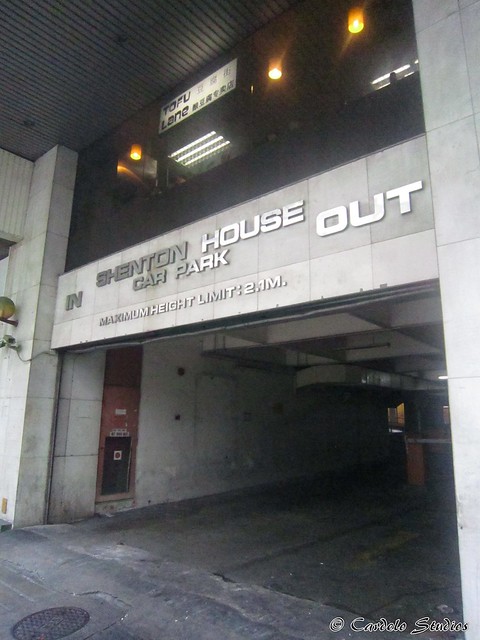 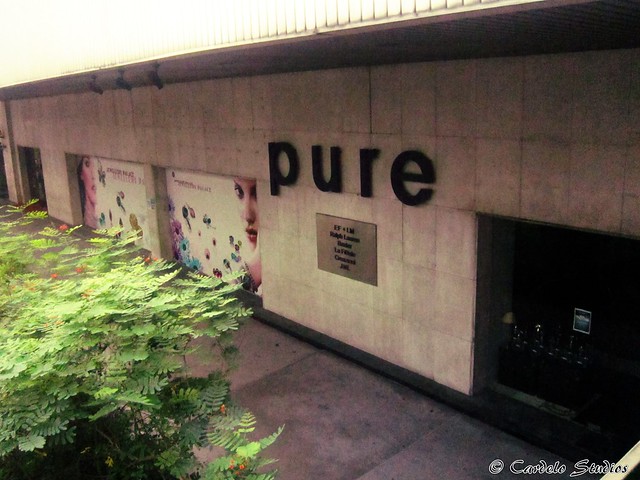 Shenton House is the only remaining building among the 3. 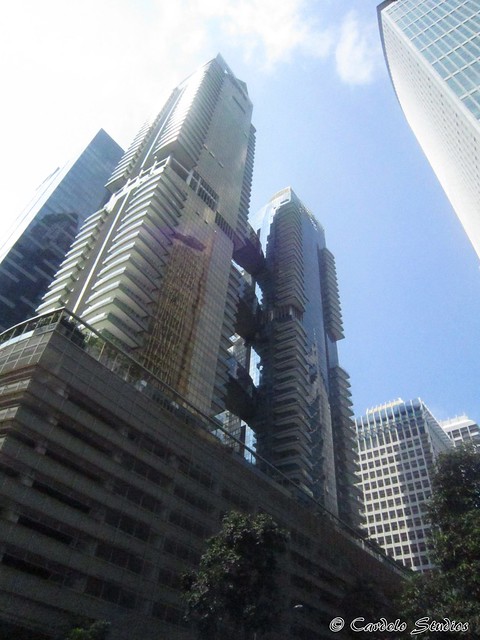 One Shenton, at the site of Robina House

The Robina House was completed in 1971, and was demolished by 2007 to make way for One Shenton.

McCallum Street is a street that runs perpendicular to Robinson Road and Shenton Way. It was named after Major Sir Henry Edward McCallum, a colonial engineer in the 1890s who designed the National Museum. Prior to that, he supervised the construction work of Fort Siloso on Pulau Blakang Mati (now Sentosa), when he was still a Lieutenant with the Royal Engineers. From 1893 to 1895, he was the President of the Singapore Cricket Club. 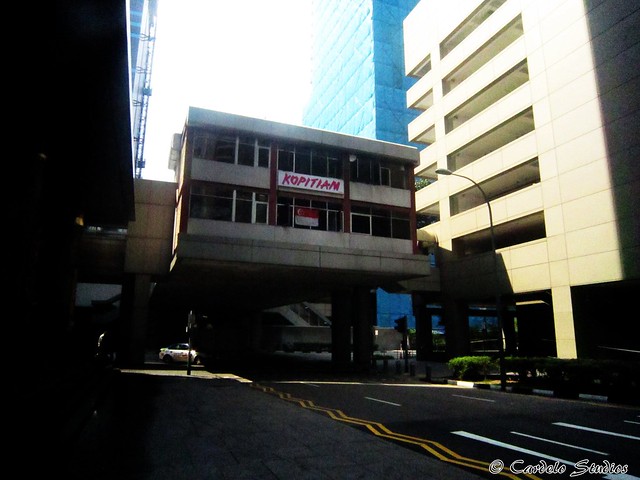 McCallum Street, at the junction with Shenton Way

McCallum Street is planned to be extended into the Marina South area. No concrete plans have been announced yet, hence it is unsure if Shenton House, which apparently stands in the way, will be affected. 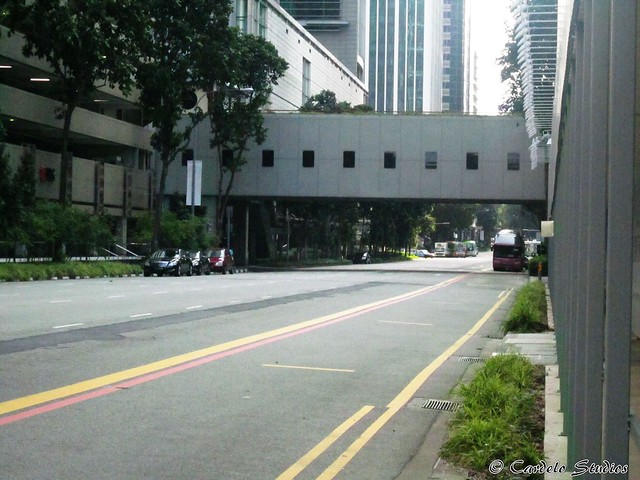 The Golden Bridge is a pedestrian overhead bridge across Shenton Way, located at the junction of Shenton Way and McCallum Street. It connects Shenton House on one side with DBS Tower Two and SGX Centre on the other side. It housed an inner food centre, and has been a popular eating spot for white-collared workers along Shenton Way since its opening in 1973. 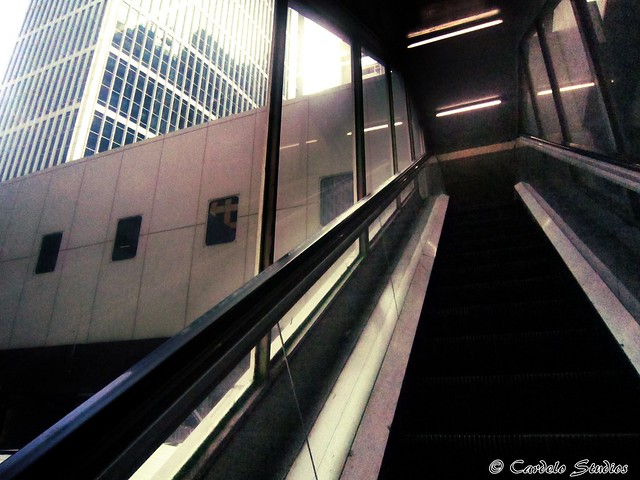 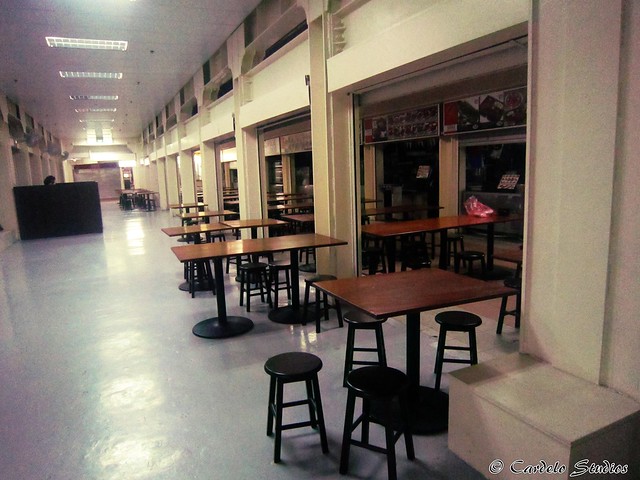 It was closed in March 2011, and was originally slated for demolition in lieu of the extension of McCallum Street. However, the lease of Golden Bridge was extended by about 3 years, and the tender went to Kopitiam. It was eventually demolished in 2015. 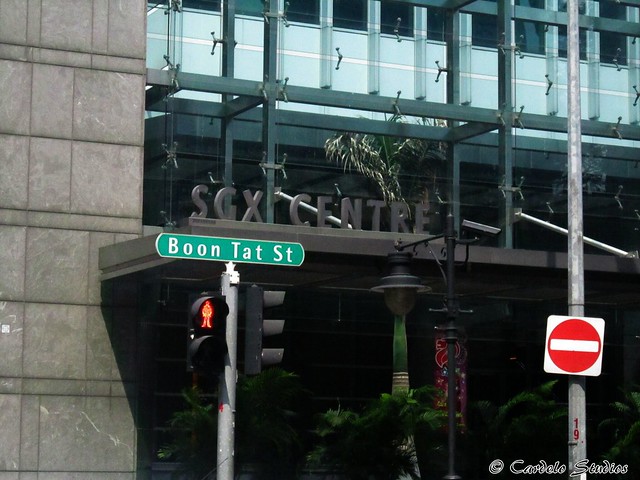 Boon Tat Street was originally known as Japan Street, but was renamed following the Japanese Occupation. It was named after Ong Boon Tat (王文达), elder son of Ong Sam Leong (王三龙), a famous Chinese businessman who is famed for having the largest tomb in Bukit Brown Cemetery. Ong Boon Tat and his brother owned the New World amusement park. Boon Tat Street is known among the Hokkien community as ma cho kiong pi (妈祖宫边; beside the Ma Cho / Ma Zu temple), as it is located next to Thian Hock Keng Temple. 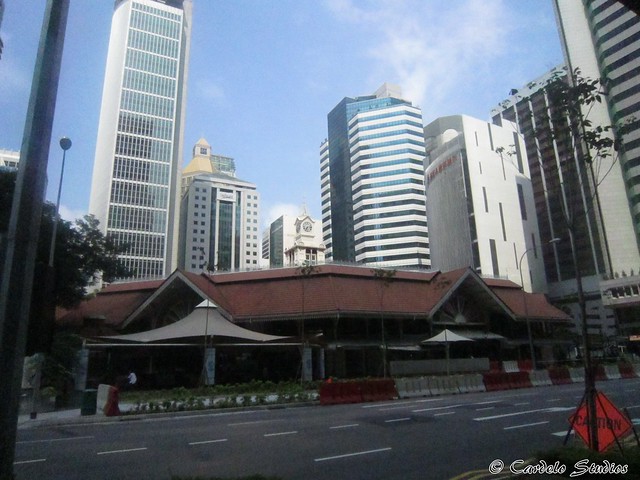 The original Telok Ayer Market was located roughly at the current location of Republic Plaza. Located along the waterfront, the $4000 timber and attap market opened in 1825 was an important trading spot. Jetties were connected to the market to allow direct loading and unloading of goods onto boats.

By 1836, a bigger market was designed by G. D. Coleman, and the octagonal building stood at roughly the same spot until 1879, when it had to be demolished due to land reclamation.

When land reclamation was completed, a new Telok Ayer Market was opened in its current location in 1894. Municipal Engineer James MacRitchie adopted Coleman’s octagonal design, but added Victorian-style decorative cast iron supports. A fountain used to stand in the centre of the market until 1920.

In 1973, the market was gazette as a national monument, and was converted into a hawker centre. It was closed down and dismantled in 1986 as tunneling work for the new MRT line might threaten its structural stability. The pieces were stored in Jurong, and the market was reconstructed in the late 1980s. It was opened in 1991 under its current name, which means “old market” and was a more popular name among locals. Business dwindled until Kopitiam took over in 1995.