Here’s a continuation of my previous post on the Golden Shoe. 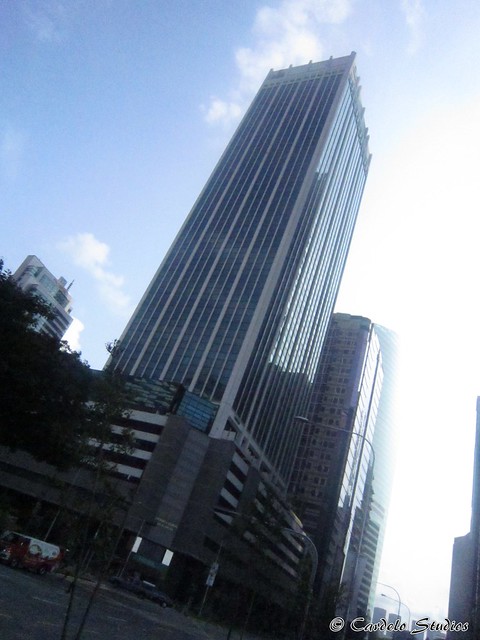 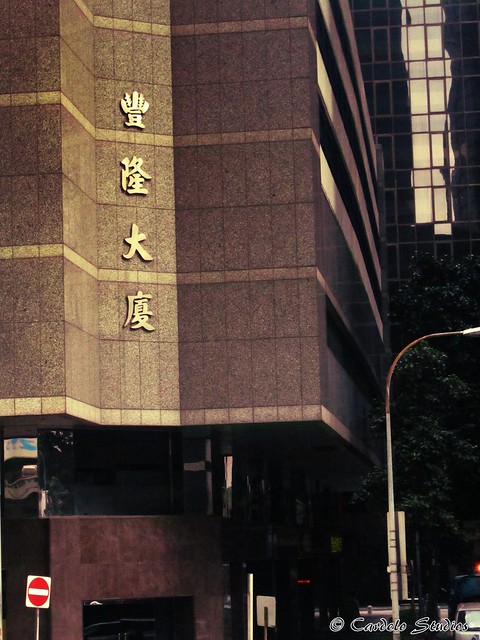 This 45 storey building was completed in 1976. Levels 4 to 7 of its podium block includes a multi-storey car park. 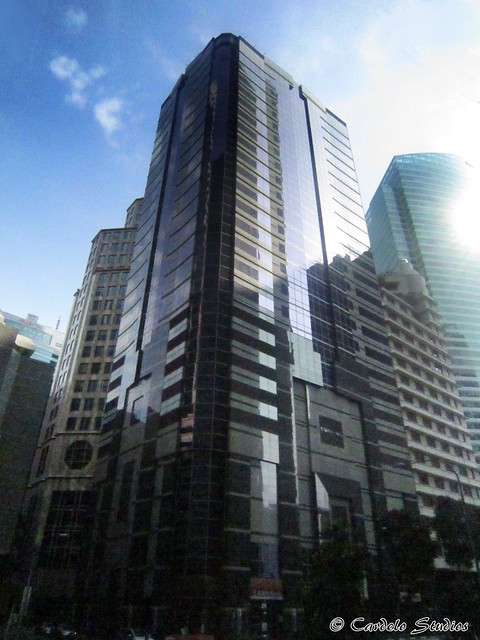 Denmark House was one of the earliest high-rise buildings along Telok Ayer Basin. Built in 1957, it was torn down to give way to John Hancock Tower, which was completed in 1992. The new building is now known as 6 Raffles Quay. 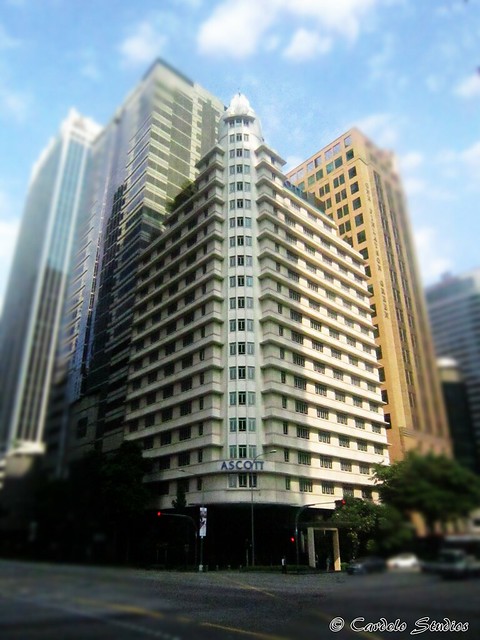 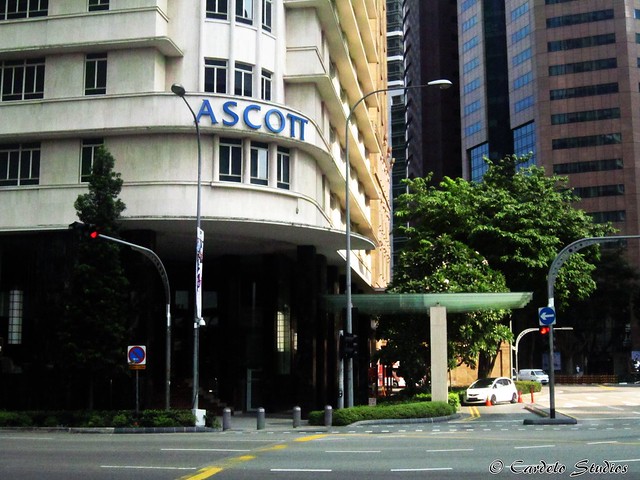 Located at the junction of Raffles Quay and Finlayson Green, it has two main facades, with its main entrance located at the corner. Its design marked the beginning of a shift away from the formal rules of the classicist style. However, one can still roughly make out the tripartite division of the façade (the atrium base, the main levels and the concrete crown). 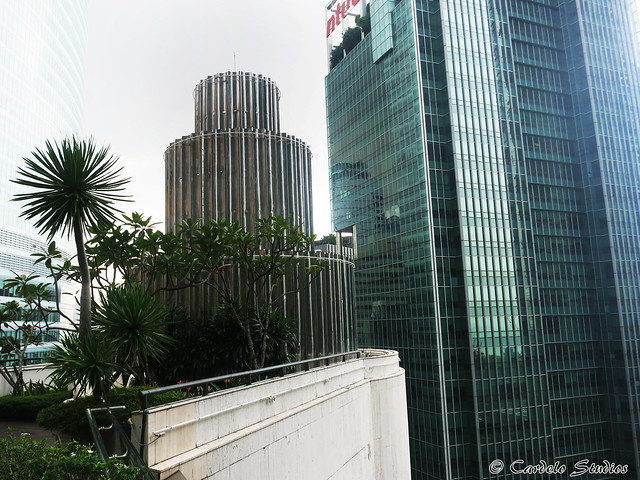 The Asia Insurance building was renamed Ascott Singapore when the Ascott Group acquired it in 2006. It was then converted into a serviced residence. 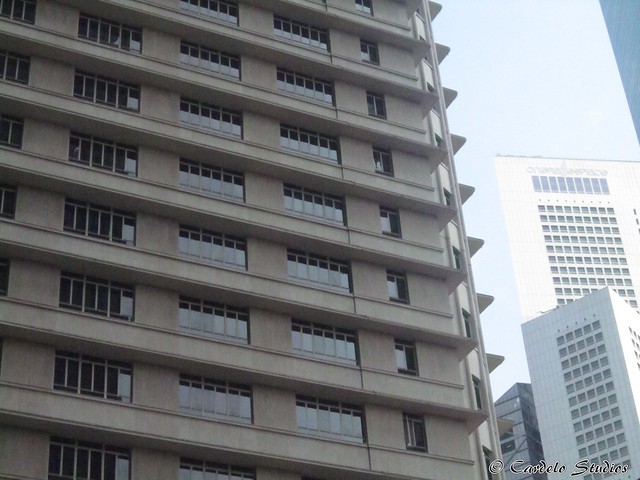 In 2009, it was awarded the URA Architectural Heritage Award. 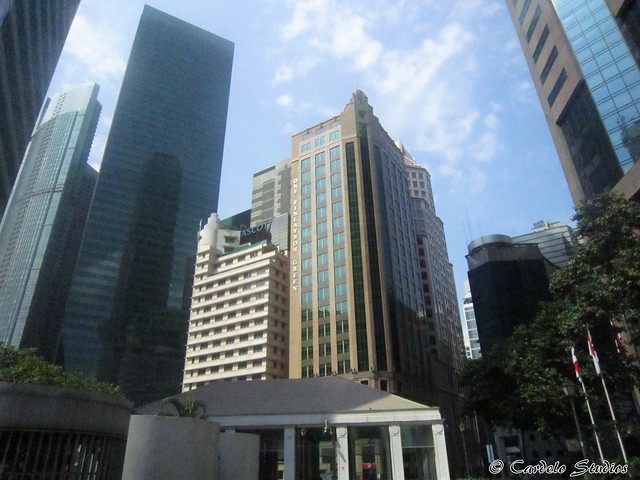 The Lucrum Capital Building, a much newer building located next to it, bears a form that resembles the concrete crown of the Ascott building.

The Overseas Union House was a result of the first sale of site, launch in 1967 under the Golden Shoe scheme. The low-rise building was completed in 1974, and was an iconic building along the bayfront until its demolition in 2007. OUE Bayfront now stands on its site. 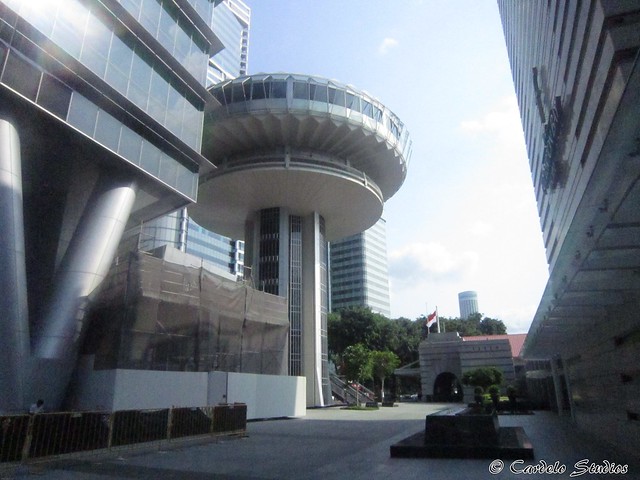 Originally known as Change Alley Aerial Plaza, the OUE Tower & Link Bridge connects the OUE Bayfront to Clifford Centre. Unlike their neighbour, the Overseas Union House, the Aerial Plaza escaped demolition and was only renovated. 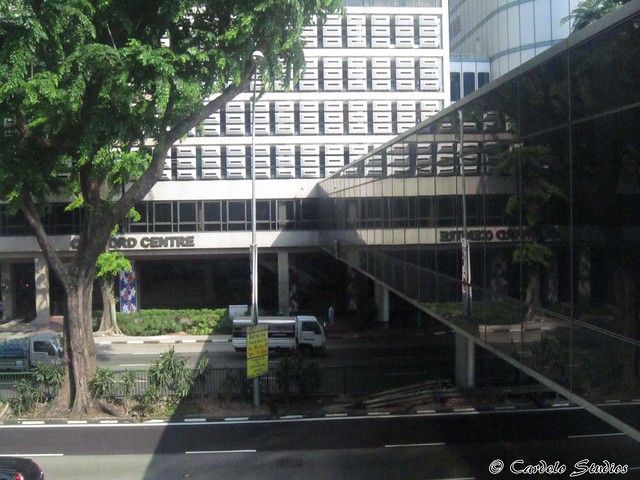 The Aerial Plaza was a result of the third sale of site by URA, and was completed in 1975. Prior to that, the piece of land, together with that of Overseas Union House, was a car park that served the Clifford Pier. 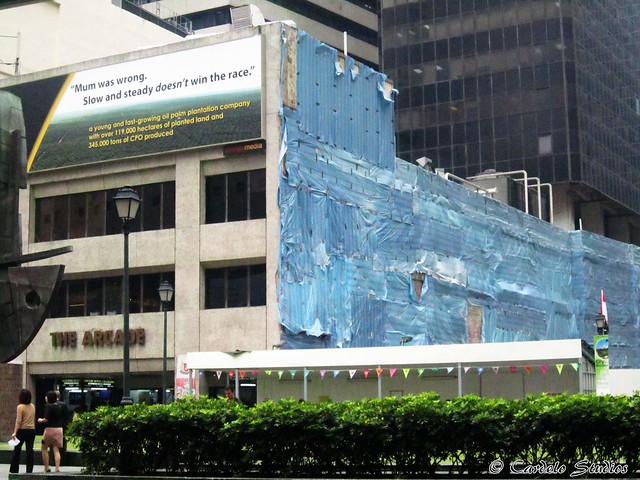 The Arcade, standing next to the empty plot where Ocean Building once stood

The Oceans Towers was an office building constructed in 1974. Demolition started at the end of 2007, and most tenants moved to the adjacent Ocean Financial Centre, which was completed at approximately the same time. The Ocean Building and Ocean Financial Centre are apparently the third and fourth structures respectively to have “Ocean” as part of their names and be built at the same area. 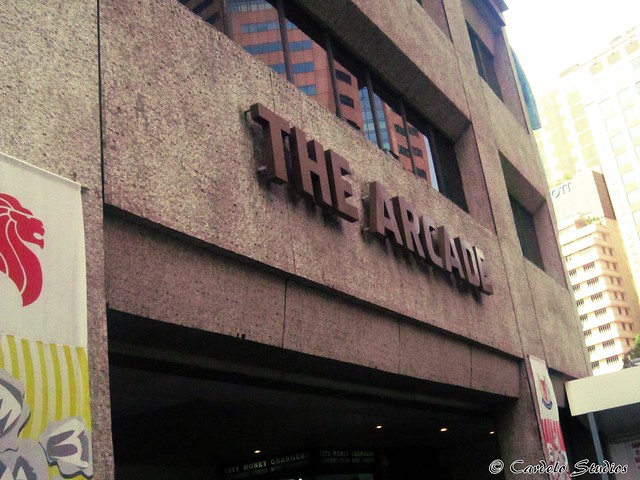 Although this 1981 building looks much older than its surrounding skyscrapers, an even older Arcade once stood at its spot. In 1908, the Alkaff family funded the construction of the Alkaff Arcade & Office. Donald MacLeod Craik of Swan & Maclaren designed this first indoor shopping centre of Singapore. At 4 storeys tall, it was the tallest building along Collyer Quay at its time of completion. It cost $146,000 to construct, and featured offices for the Alkaff family and stables on the ground floor for their horses.

Initially, it was designed with Dutch gables and classical arches. However, in the 1920s, the gables were replaced with Islamic onion domes, while the arches became Moorish, in an attempt to make the façade more “Islamic”. The Alkaff Arcade had a very long plan, as it also served to connect Collyer Quay and Raffles Place.

When revenue from rentals began to fall below expectations, the Alkaffs wanted to demolish the building and construct a newer office block in its place. However, it was deemed to be unprofitable as there were many other office buildings being constructed around it. In 1962, the Alkaffs eventually sold the building to Singapura Developments, who demolished it in 1978 to make way for the current Arcade. 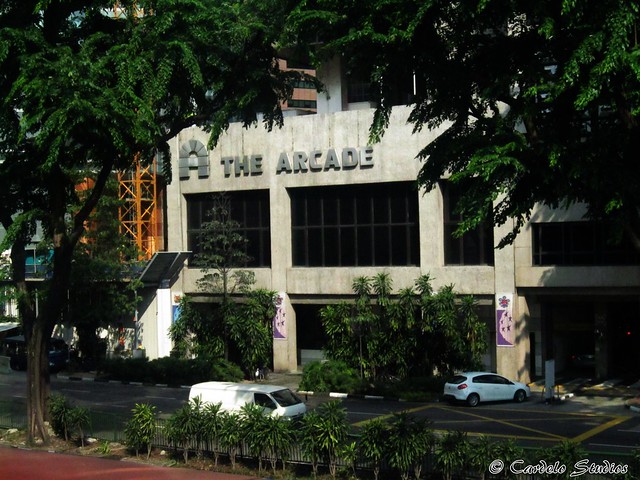 Its façade along Collyer Quay

The current Arcade building was completed in 1981, and is much less prominent compared to the new skyscrapers and office towers around it. 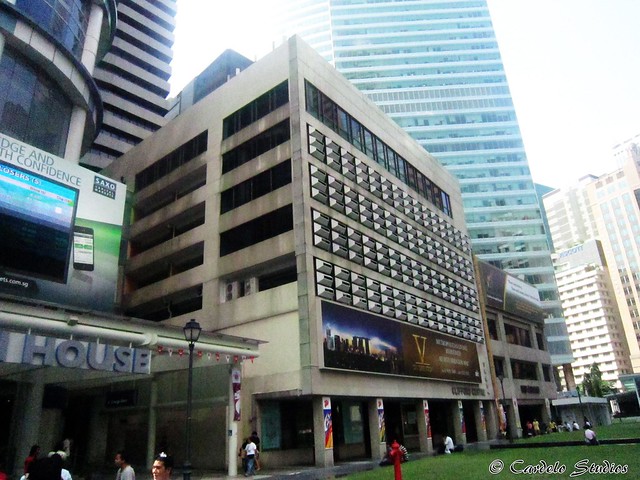 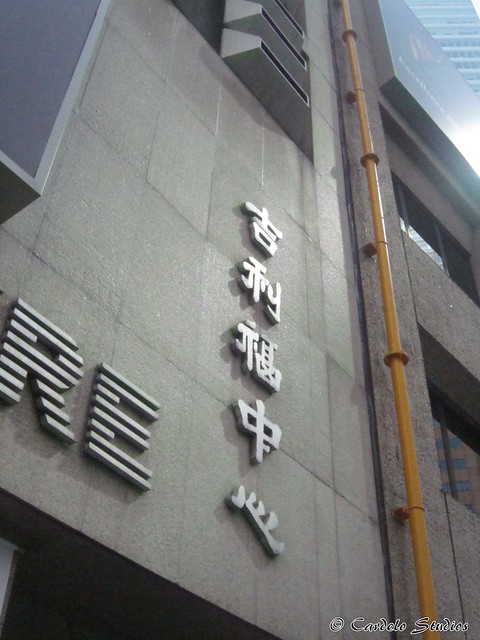 Change Alley is a narrow stretch connecting Raffles Place to Collyer Quay, much like the Alkaff Arcade. It has been in existence since the early 1900s, and was famous for its money changers.

Its popularity rose in the 1940s, attracting both locals and visitors. More stalls were set up along the alley, selling all sorts of cheap items. However, it also led to congestion.

Along Collyer Quay, it was flanked by the Singapore Rubber House and Winchester House. On the other side, it stood between Bank of America and John Little’s Building. 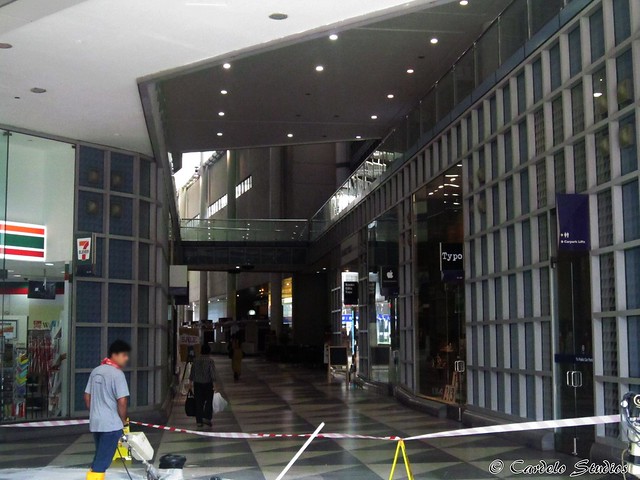 Business fell as the waterfront ceased to be the main commercial area. Change Alley finally closed in 1989. When the Hitachi Tower and Chevron House were constructed, a new Change Alley was created. It is a naturally ventilated galleria with shops and restaurants along both sides. With its Marina Bay-facing orientation and high ceiling height, Change Alley enjoys its fair share of cool breezes, allowing the interior space to be comfortable even on a hot and sunny day. 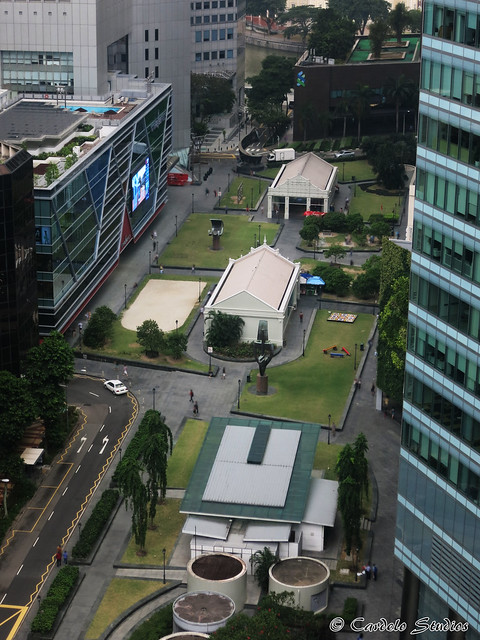 Raffles Place was known as Commercial Square, and was part of Lt. Philip Jackson’s town plan in 1823. It was renamed Raffles Place in 1858, and has been an important trading district. It was also a premier shopping area, with John Little Department Store set up in 1845 and Robinson’s Department Store in 1858. It was a rectangular garden area, but was later transformed into a car park and jinrickisha station in the 1920s. In 1970, Raffles Place was identified by URD to be a financial district under the Golden Shoe scheme.

Currently, the only reference to its past as a shopping district is the exits of Raffles Place MRT, designed to resemble the Spanish-style façade of John Little’s building. 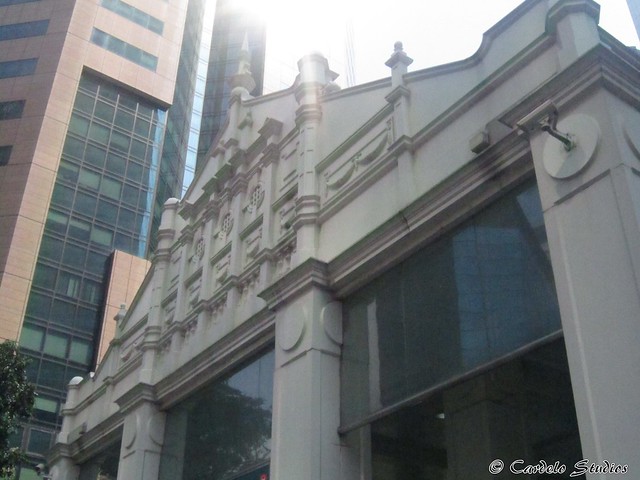 D’Almeida Street was named after Dr Jose d’Almeida Carvalho E. Silva, a former Portuguese naval surgeon and leading merchants in the early 1800s. He was one of the earliest European settlers in Singapore ever since Raffles’ arrival. He set up a dispensary at Commercial Square, as the spot which later became the Mercantile Bank (now the spot between D’Almeida Street and Ocean Financial Centre), and later a trading firm known as Jose d’Almeida & Co. It was renamed Jose d’Ameida & Sons when his two sons joined the company, and became a leading firm in Singapore before going bankrupt in the economic recession of 1865. Jose d’Almeida passed away in 1850 and was buried in Fort Canning Hill (the cemetery area is now known as Fort Canning Green). His funeral was attended by almost every merchant in Singapore. 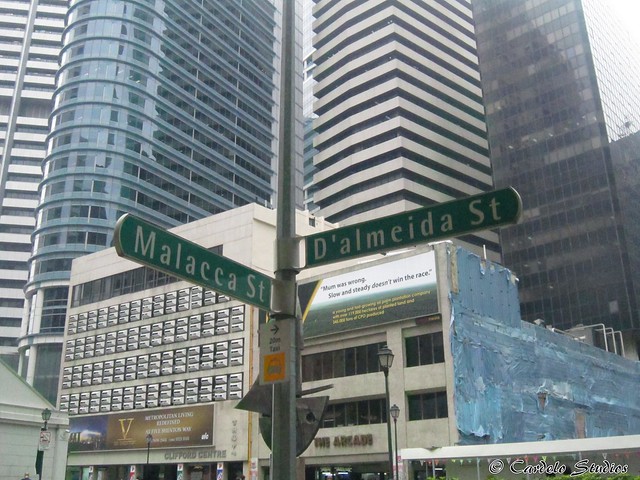 Currently, there is an L-shaped road in Raffles Place, formed by D’Almeida Street and Malacca Street. In the past, D’Almeida Street extended along Raffles Place and was connected to Battery Road. There was also a D’Souza Street running parallel to it, on the other side of Raffles Place (in front of the Arcade). However, in 1972, the Public Works Department (PWD) converted the roads into pedestrian walkways, forming the road network as we see today.

Robinson’s Department Store was a premier shopping mall in Raffles Place. It was established in 1858 by Philip Robinson and James Gaborian Spicer, and was known as Spicer and Robinson until Spicer pulled out after less than two years. It was then renamed Robinson & Co.

In 1972, a short circuit caused a great fire which destroyed the four storey building. The flames reached as high as 60m and were visible even from Jurong. 9 people died in this disaster, which also marked the end of Raffles Place as a shopping district. The store was moved to Specialists’ Shopping Centre, which also could not escape demolition in 2008. Its main store is currently in The Heeren. 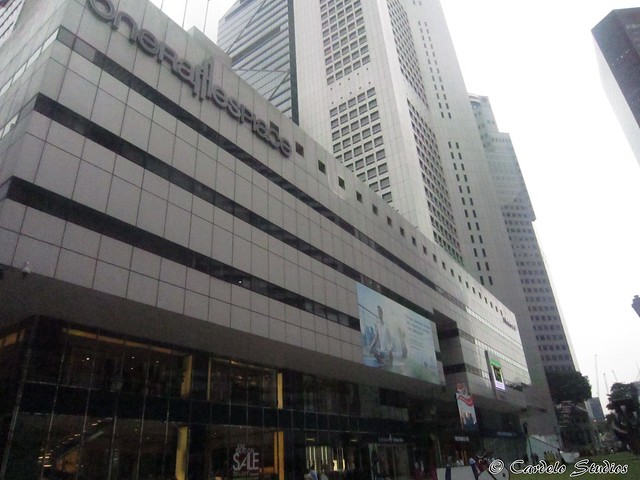 One Raffles Place, roughly where Robinson’s used to be

On the original site of Robinson’s Department Store at Raffles Place now stands One Raffles Place, which includes the OUB Centre, one of the 3 tallest buildings in Singapore. 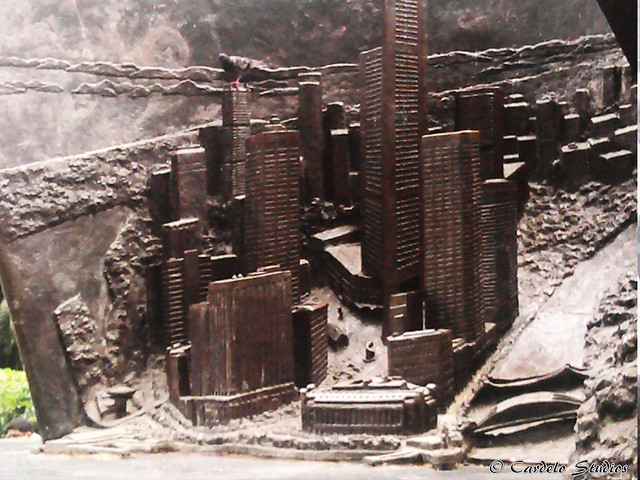 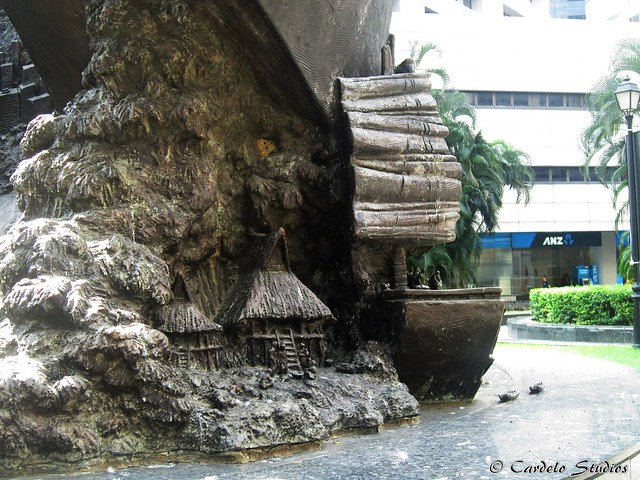 This sculpture is located at the end of Raffles Place, next to Battery Road. Done by Yang Ying Feng in the late 1980s, it shows the developing cityscape of Singapore from past till present. 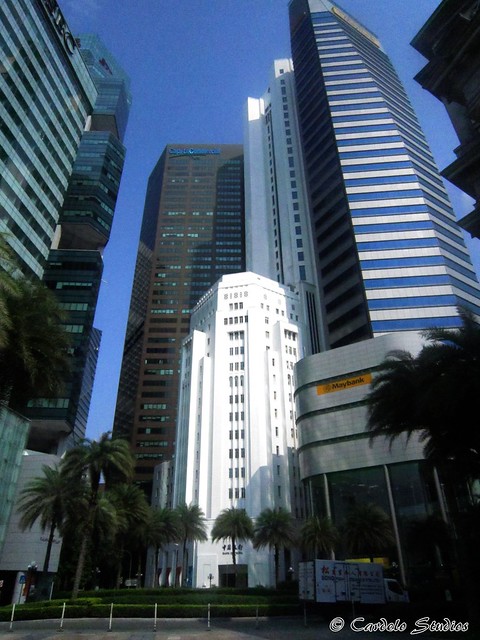 Built in 1954, this post-war Art Deco building was designed with a clear formal tripartite language. The 18 storey building was once the tallest building in the CBD area, but is now severely dwarfed among the new skyscrapers. 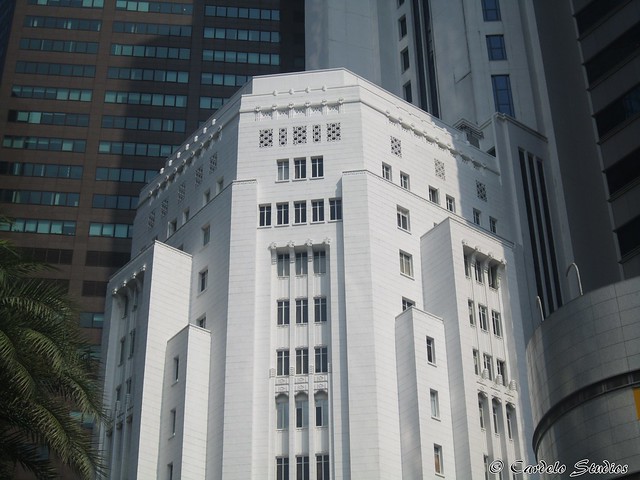 A new block was built in 2000, with 36 floors and a height of 168 metres. It is adjacent and connected to the old building, and was given the same white façade. 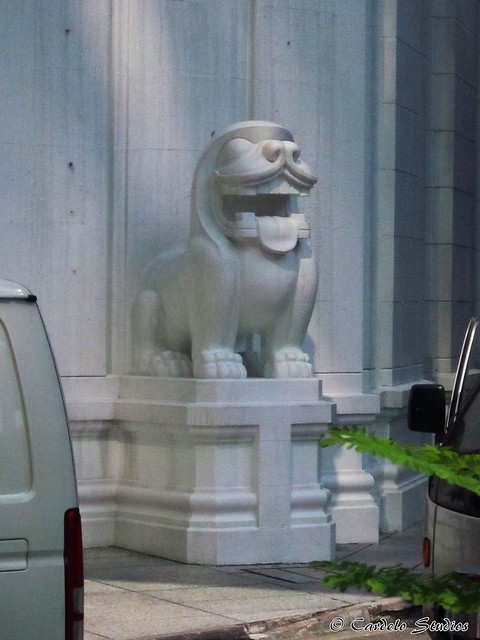 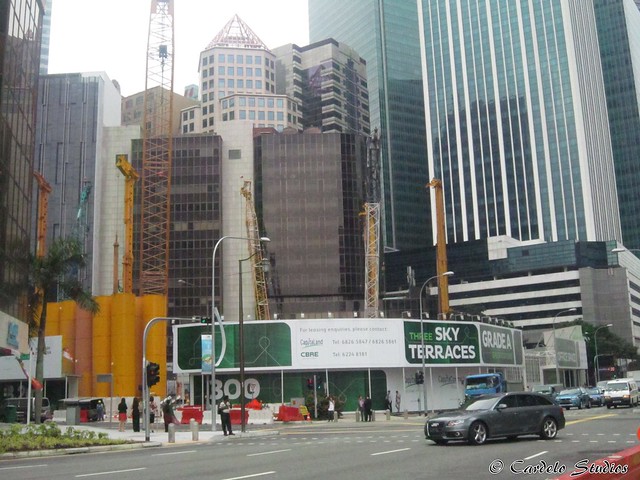 Market Street Car Park was the first multi-storey car park in Singapore. The 8-storey car park also housed shops and eateries on the ground floor. Despite having just renovated the kopitiams in 2006, it was closed for demolition in mid 2011. CapitaCommercial Trust (CCT) plans to build CapitaGreen, a new 50 storey office tower in its place. This move was negatively received by driving workers in the CBD, as the new office tower is said to offer only 180 parking lots, as opposed to the 700 in the original car park. In addition, the new office tower would be expected to attract more high income workers who drive to work, further straining the parking spaces in the area. 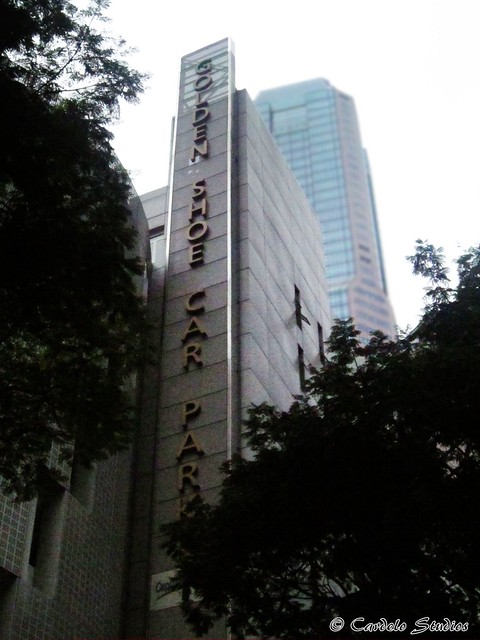 The Golden Shoe Car Park is probably the only building in the area that explicitly refers to the 1970 scheme by URD. This 10 storey multi storey car park shares a number of similarities to the Market Street Car Park. It is also owned by CCT, and is also adjacent to Market Street (albeit along a separate stretch of it). It also houses famous cheap eateries on the ground floor. 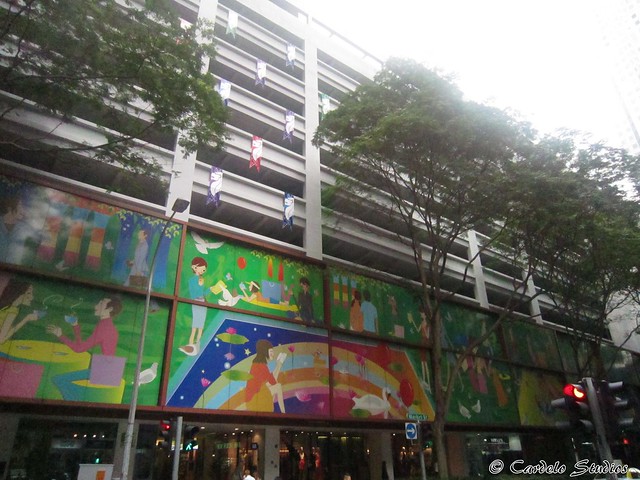 Large murals cover the lower levels of the car park

On the tenth floor are office spaces, housing tenants such as DCA Architects.