National Day has just passed, and every year this month, the National Heritage Board will allow Singaporeans and PRs to enter their museums for free. Among the 8 museums with free admission, 4 are located in the Museum Planning Area (around City Hall/Bras Basah). Here are some photos and information that I have gathered. 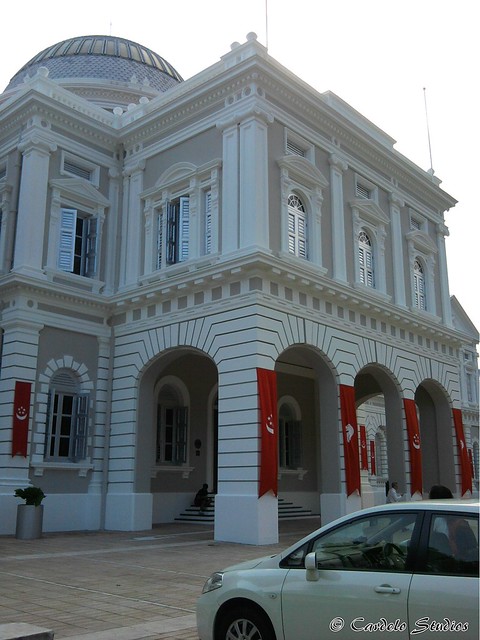 The Neo-Palladian and Renaissance style building of the National Museum of Singapore was officially opened on 1887. Before that, the museum was a section of the library in the Singapore Institution (now Raffles Institution). The Raffles Library and Museum moved to the Town Hall (now Victoria Theatre & Concert Hall) in 1874, but moved back to a new wing in the institution 2 years later when the Town Hall was deemed too small. 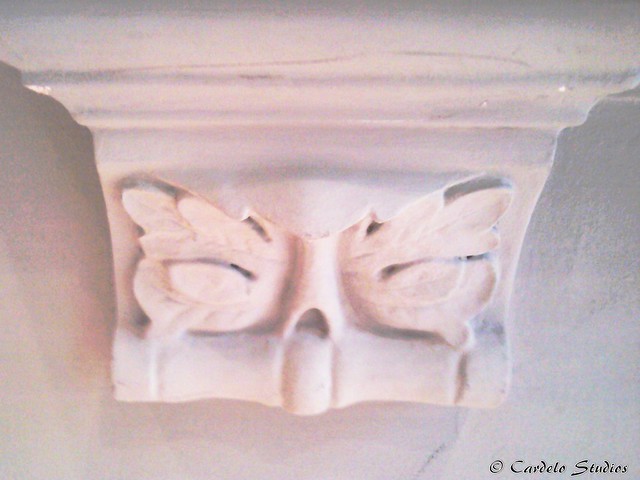 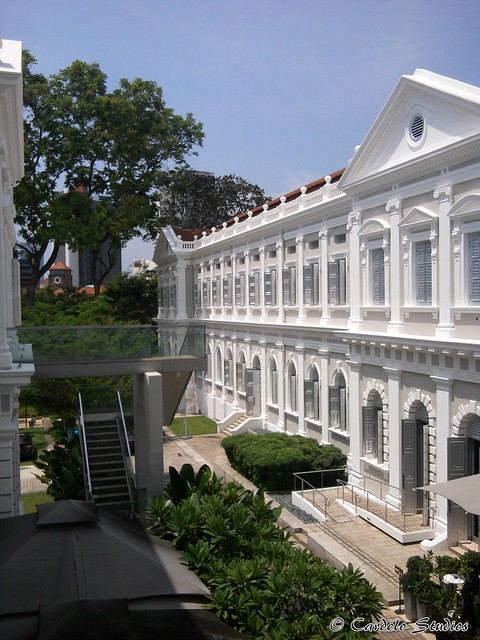 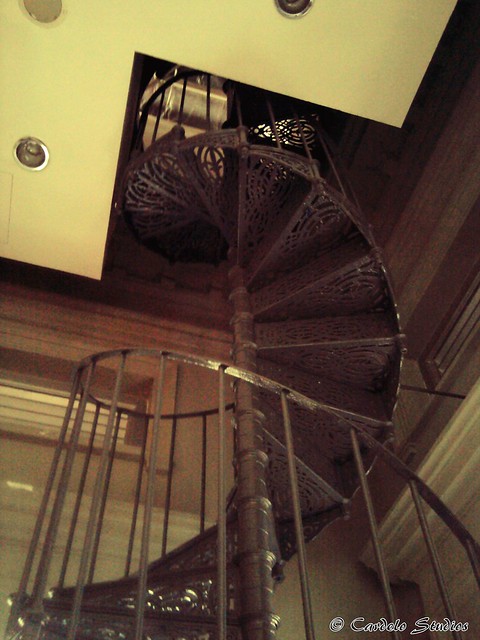 New and old staircases. The spiral staircase is reputed to be haunted. Who knows?

In 1993, the museum was renamed Singapore History Museum. It moved into a temporary location at Riverside Point in 2003 while restoration and extension works were carried out. The rear annex that houses the Singapore History Gallery was constructed during that period, and was designed by W Architects. The museum reverted to its old name and moved back in 2006. 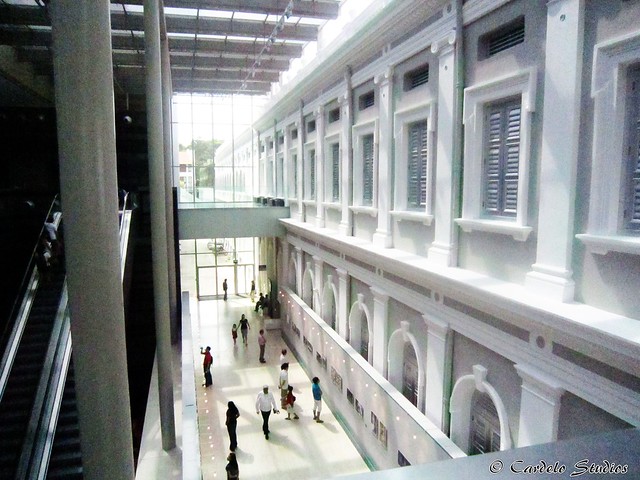 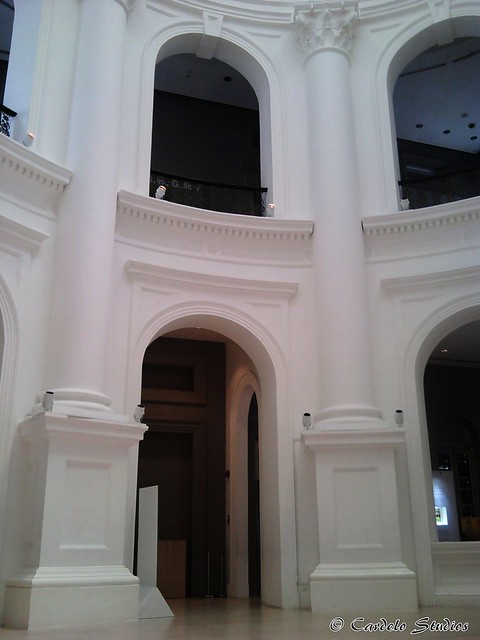 The new annex was a stark contrast to the old building in terms of design. The old building was strictly symmetrical, with a central rotunda and dome located at the entrance lobby. The new annex, however, has a glass-clad rotunda that was intentionally offset to one side. The transition from classicism to modernism was made possible by the glass roof over the vestibule space on the second level. 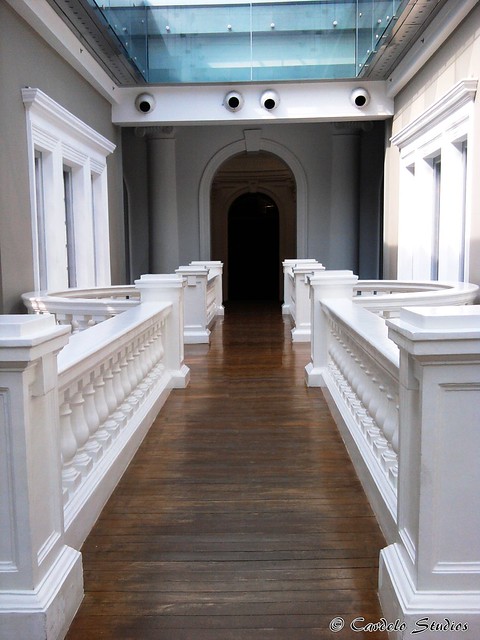 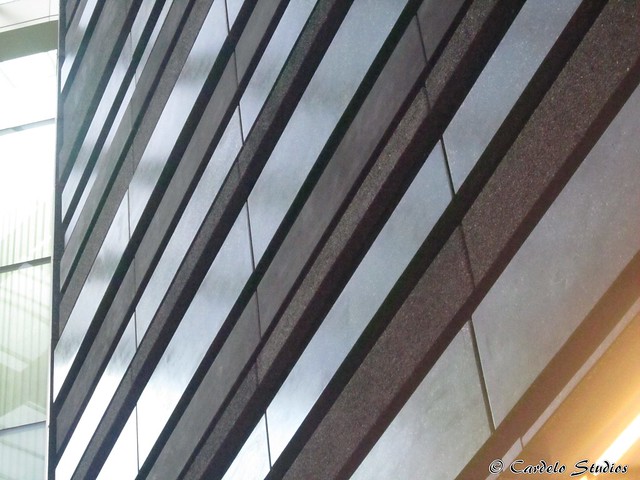 The building was gazetted a national monument in 1992. 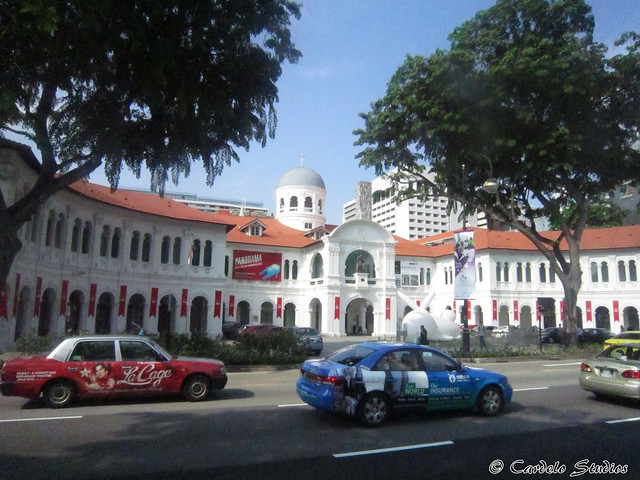 Singapore’s first Roman Catholic chapel was built on this site in 1833. When the chapel moved to the adjacent Cathedral of the Good Shepherd, a boys’ school was started inside the wood and attap chapel, until a new school building was completed in 1867. The building consisted of the central rectangular block. 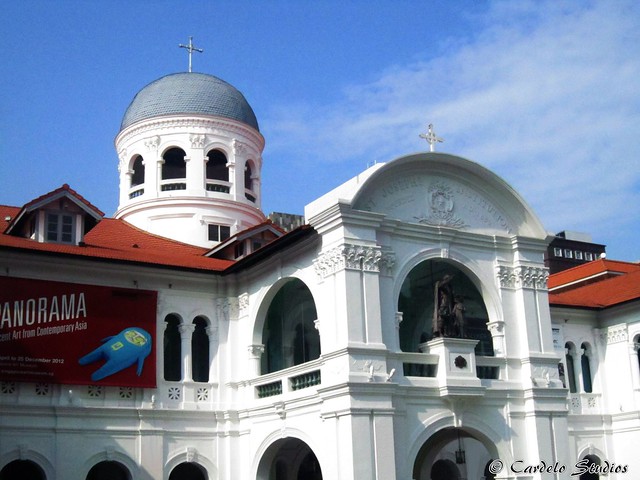 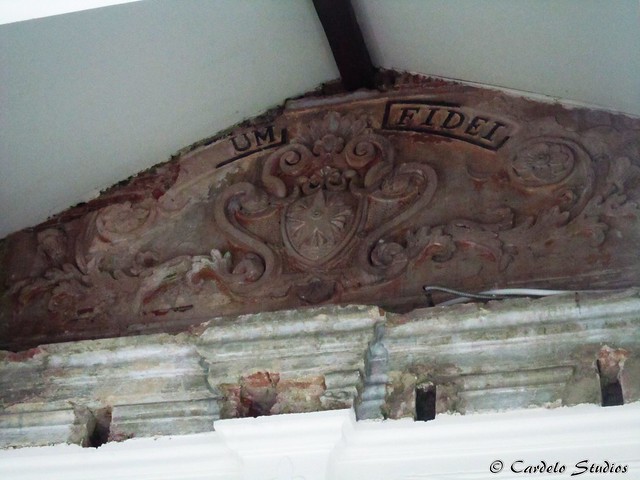 The dome and central block

In 1903, the first extension to the school building was carried out. The two iconic semi-circular arches on either side of the central block were added, together with the dome over the original building. In 1911, the school hall and chapel were added in the second and final extension. 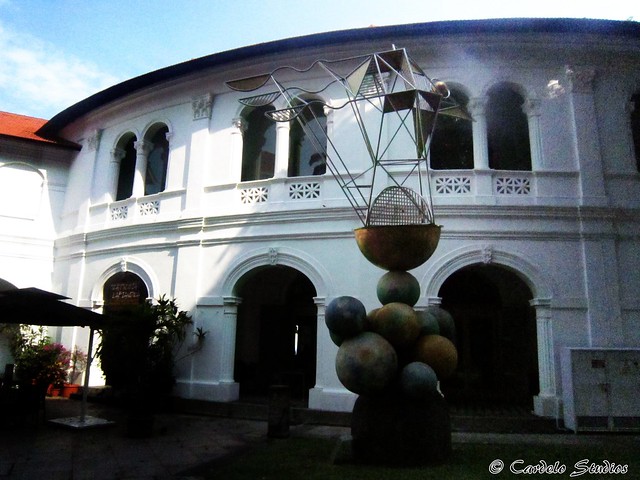 The school moved to its current location at Malcolm Road in 1987, leaving behind the old campus building and the statue of de La Salle. 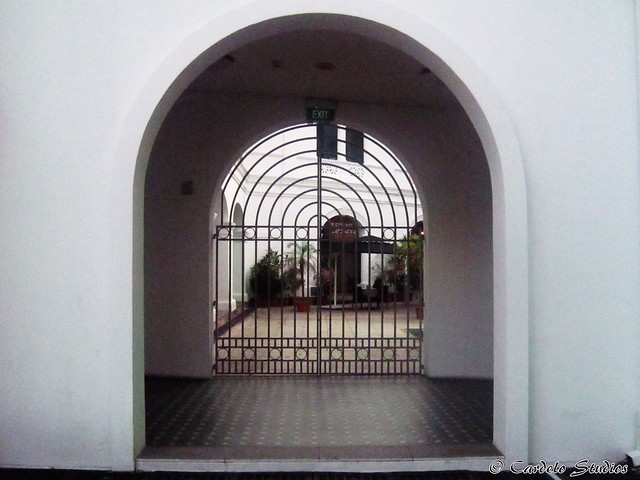 A peek into the central courtyard

The building was declared a national monument in 1992, and reopened as the Singapore Art Museum 4 years later. 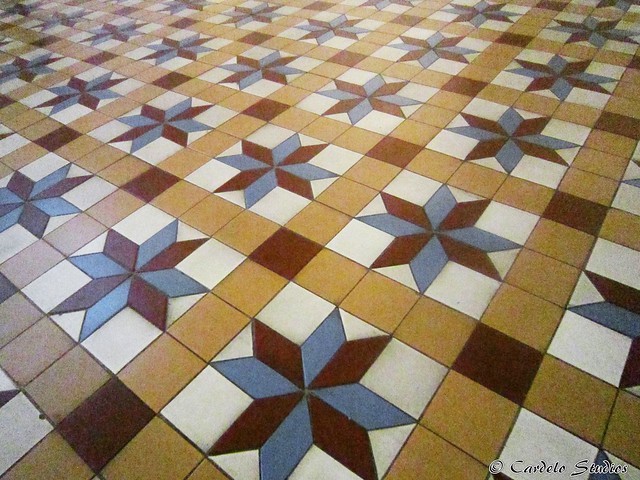 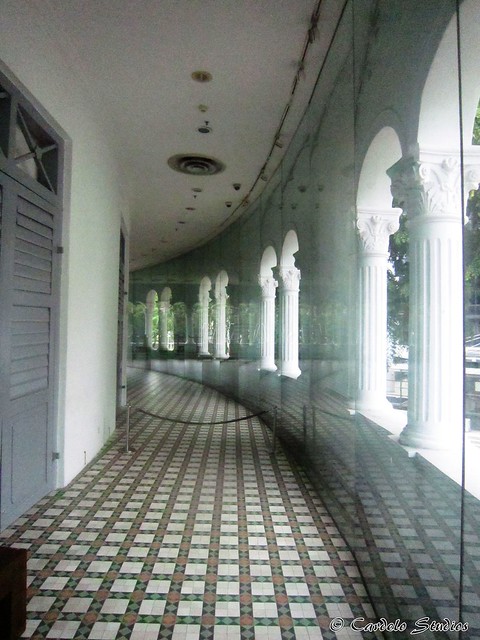 Glass panels were installed along the corridors to allow them to be air-conditioned together with the rest of the building. The Hall was converted into the Glass Hall, while the Chapel above it is now one of the 13 exhibition spaces in the museum. 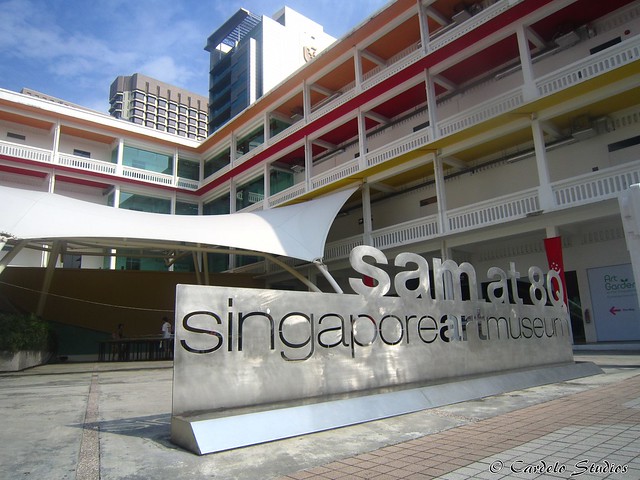 The SAM at 8Q is an extension of the Singapore Art Museum and is located just a stone’s throw away. It was originally the primary school wing of the Catholic High School. The adjacent Kum Yan Cantonese Methodist Church (新加坡卫理公会感恩堂) took over in 1987 when the school relocated. The National Heritage Board took over the building in 2007 and renovated it into its current condition. The SAM at 8Q focuses on contemporary art. 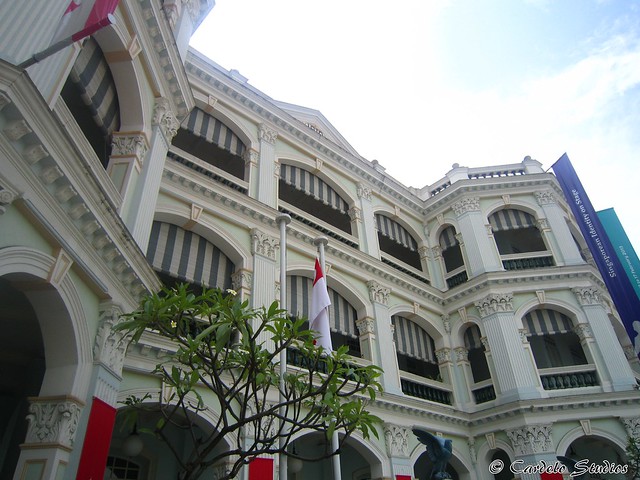 Tao Nan School was the first school established by the Hokkien Huay Kuan (福建会馆). It was established in 1906 by 101 founding members, including Tan Kah Kee (陈嘉庚), and was known as Daonan Xuetang (道南学堂). It functioned in Tan Kim Ching’s residence at Siam House along Coleman Street until a new school building was completed on a plot of land at Armenian Street, bought with a donation by Oei Tiong Ham (黄仲涵). Its Mandarin name was then renamed Daonan Xuexiao (道南学校).

Despite being a Hokkien school, the building design was anything but Chinese. The 3-storey building was designed in the Neo-classical style with features of the French Renaissance. A central courtyard is located in the middle of the building to allow skylight and ventilation. 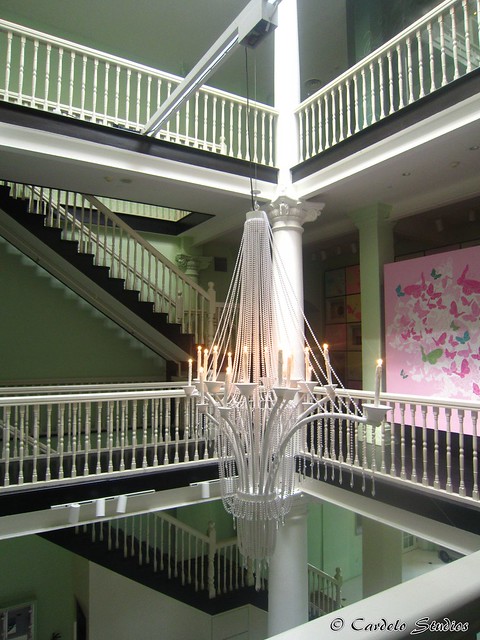 Tao Nan School relocated to Marine Parade in 1982. In 1997, the Asian Civilisations Museum opened. It shifted its flagship museum to the Empress Place Building in 2003, but the branch at Armenian Street continued to operate for another 3 years before closing for renovations. The management decided to focus on Peranakan culture instead of children-themed or Chinese ceramics. The Peranakan Museum officially opened in 2008. 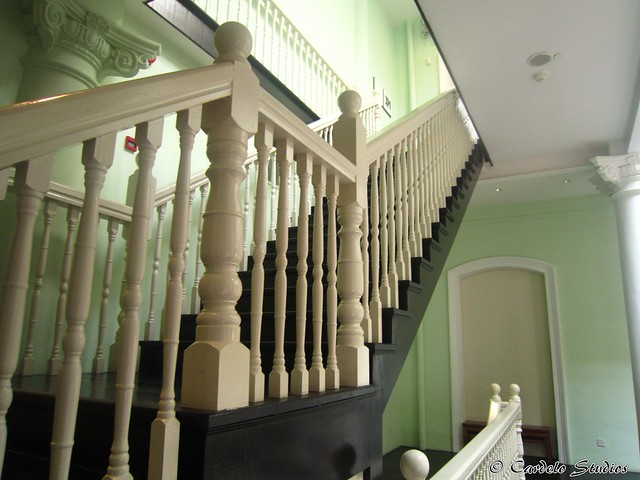 Staircases located on both sides of the courtyard

Similar to all other museums located in old buildings, the old Tao Nan School building had to be adapted to allow for air-conditioning. A glass roof is located over the central courtyard to allow the whole building to be air-conditioned. The entrance atrium now has a high vertical space similar to the rotunda space in the National Museum of Singapore. 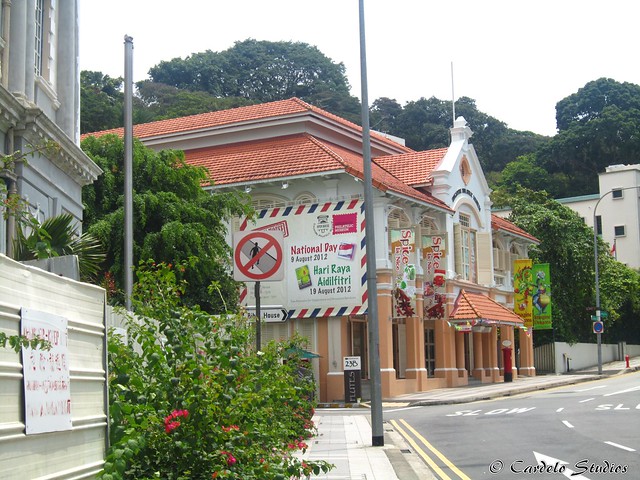 The Singapore Philatelic Museum. The building used to be a part of the Anglo-Chinese School campus

The other 4 museums that are open to locals this August are the Asian Civilisations Museum, the Sun Yat Sen Nanyang Memorial Hall, the Old Ford Factory and Reflections at Bukit Chandu.

From May 2013 onwards, with the exception of the Old Ford Factory, all 7 other museums began granting free entry to citizens and PRs all year round, along with the Malay Heritage Centre. Since then, the Old Ford Factory, the Army Museum of Singapore, Singapore Discovery Centre, Indian Heritage Centre and National Art Gallery have also granted free entry to citizens and PRs.