The Bras Basah – Bugis district is a 95 hectare area that is culturally, historically and architecturally rich. Its history dates back to 1822, when Lieutenant Philip Jackson drew up the urban plan for the town of Singapore (known as the “Jackson Plan”) under Raffles’ orders. The current Bras Basah – Bugis area lies roughly around the areas of the civic centre and the European Town. Due to its prime location, there was a conglomeration of religious, educational and residential buildings. In my last post, I shared photos and information of the museums and old school buildings. But the iconic buildings located in this district are not restricted to these.

In the past, wet rice was laid along this road to be dried. This led to the Malay name beras basah, which means “wet rice”. This name first appeared in G. D. Coleman’s map of Singapore in 1836. Prior to that, the road was known as Church Street/Selegy Street or Cross Road. 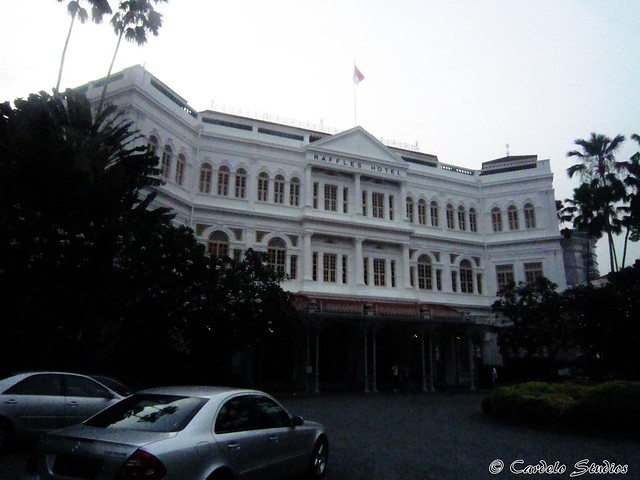 The hotel was founded in 1887 by the Sarkies Brothers from Armenia, who had also opened numerous other hotels in the region. It was originally located in a colonial bungalow located along Beach Road and Bras Basah Road, owned by Arab trader Syed Mohamed Alsagoff (سيد محمد بن أحمد السقاف). In 1899, the main building was completed, and was equipped with electric lights and ceiling fans. Subsequent extensions were built at different times between 1904 and 1920.

There used to be a popular cinema known as Jubilee Theatre located next to the hotel. It opened in the 1930s and was managed by Eng Wah Theatres. It was torn down in the late 1980s to make way for the extension block. Jubilee Hall, the playhouse in the new extension, was named after this theatre. 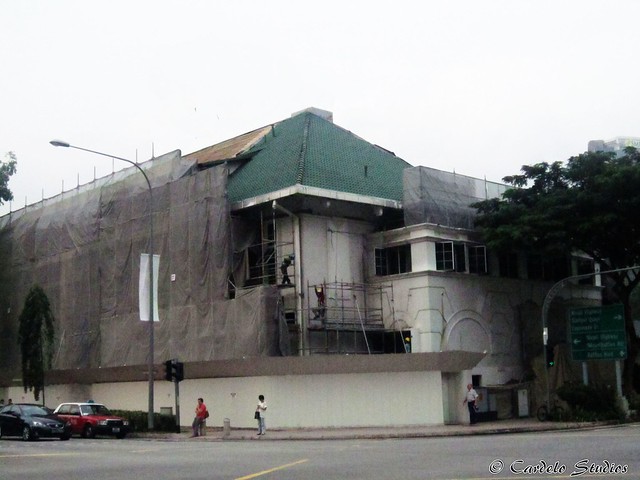 The SAF NCO Club building was opened as the Britannia Club in 1952. It served as a recreational centre for the British Navy, Army and Air Force Institutes (NAAFI). When the British troops pulled out, the club closed down in 1969, and reopened as the SAF NCO Club 5 years later. It was renamed SAF Warrant Officers and Specialists (WOSE) Club in 1994. In 2002, the club moved to a newer and larger premise at The Chevrons. The building was bought over, together with the rest of Beach Road Camp (completed in 1932; closed in 2000), to be developed into the new South Beach Development. As the buildings were given conservation status in 2002, they will be conserved within the new development premises. 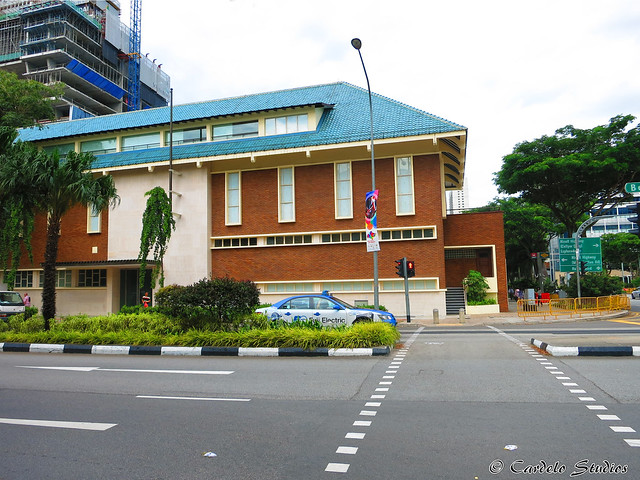 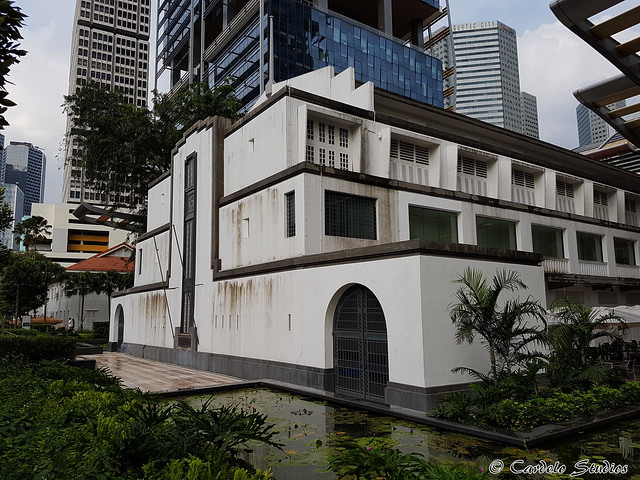 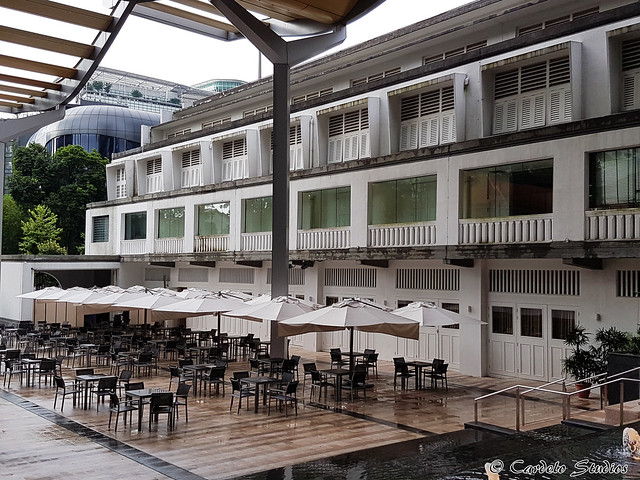 The history of the Beach Road camp began in 1907, when the headquarters of the Chinese unit of the Singapore Volunteer Corps (SVC) was set up here, complementing the main SVC headquarters at Fort Fullerton. A wood-and-corrugated-iron building was built to house the SVC Chinese unit. In 1932, a new concrete-and-brick building (block 9) was completed, replacing the functions of the original wooden building, which was demolished the next year. The new art deco building housed the overall headquarters of the SVC and the Straits Settlement Volunteer Force (SSVF). It became the main building of Beach Road camp, and was subsequently also referred to as the Drill Hall. Over the years, more buildings were constructed, such as block 14, used to house the Malay company of the SVC. 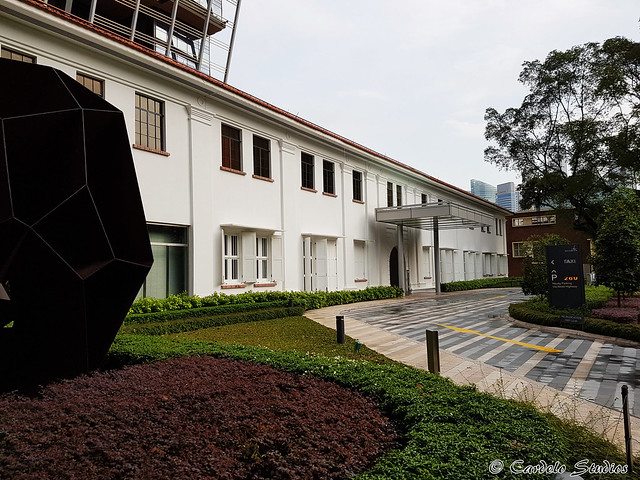 In 1953, the Singapore Military Forces Bill was passed, allowing Singapore to set up its own army and navy. The Singapore Military Forces (SMF) was then formed, consisting of regulars, national servicemen and volunteers from the SVC. The Beach Road camp then became the headquarters of the SMF, as well as the registration centre and training camp for conscripted national servicemen. The SVC was renamed the People’s Defence Force (PDF) following Singapore’s independence in 1965. The newly-formed Singapore Armed Forces (SAF) also set up several military units in Beach Road camp. Thus, Beach Road camp was deemed as the birthplace of the SAF. 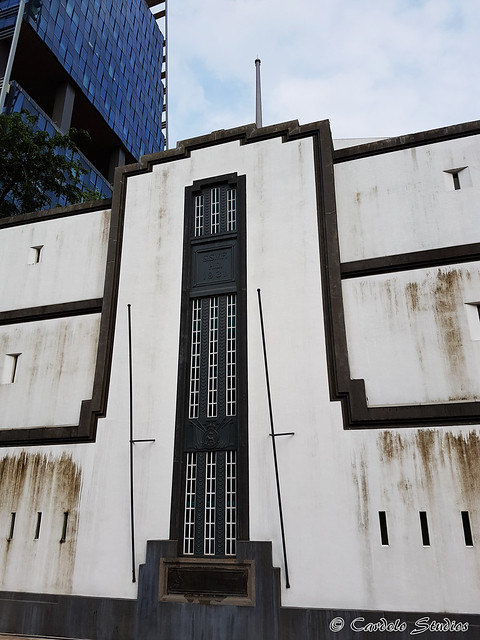 The iconic vertical ornamental window of Block 9. A memorial plaque commemorating the volunteers who sacrificed themselves during WWII is located at the base of the window 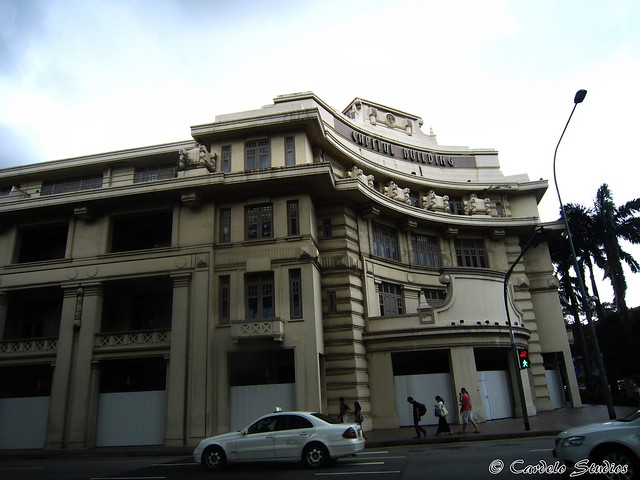 Capitol Theatre was built in 1929 by the Persian Namazies family, and Capitol Building was completed as an extension 4 years later. The neo-classical style building was sold to Shaw Organisation in 1946, and was known as Shaw Building until 1989. 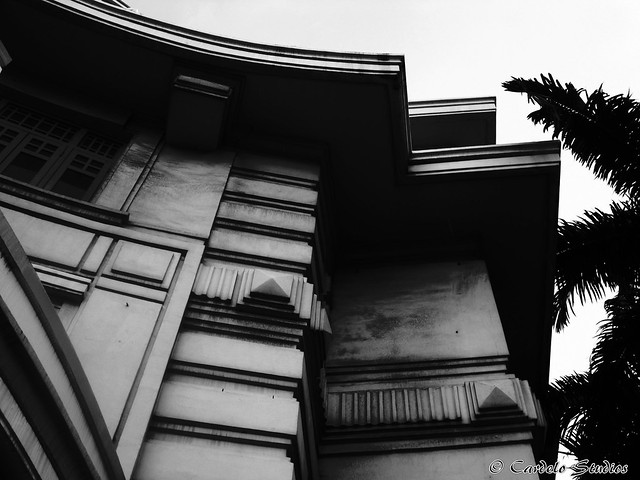 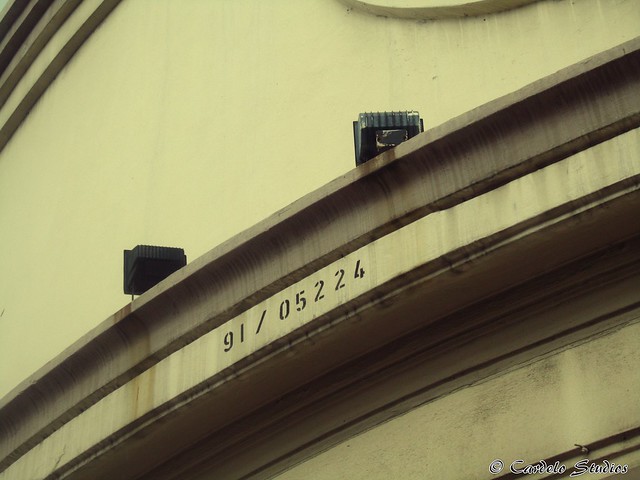 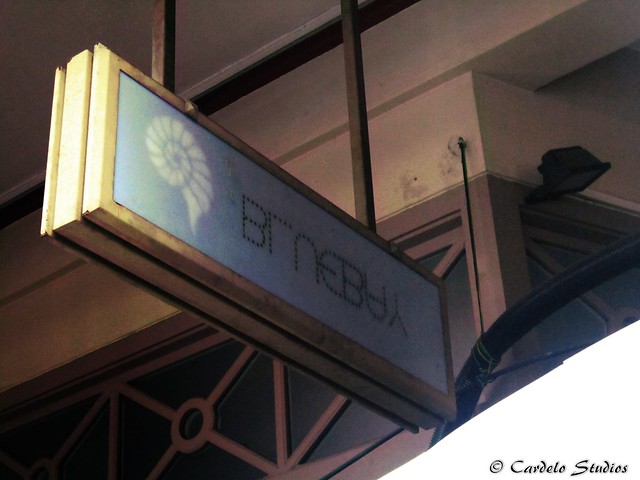 The URA took over the building in 1987, but movies continued to be screened for the next 11 years. 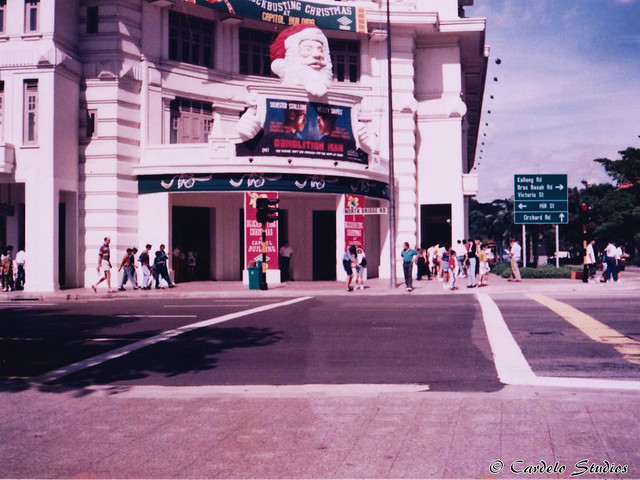 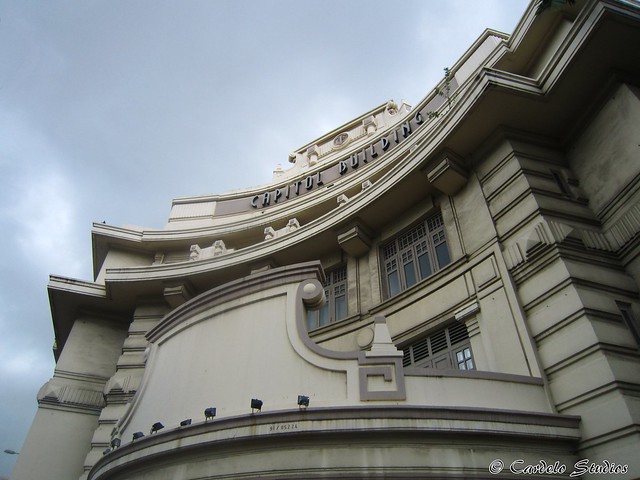 The billboards are no longer there

The iconic curved façade facing the junction of Stamford Road and North Bridge Road used to be covered with giant billboards. 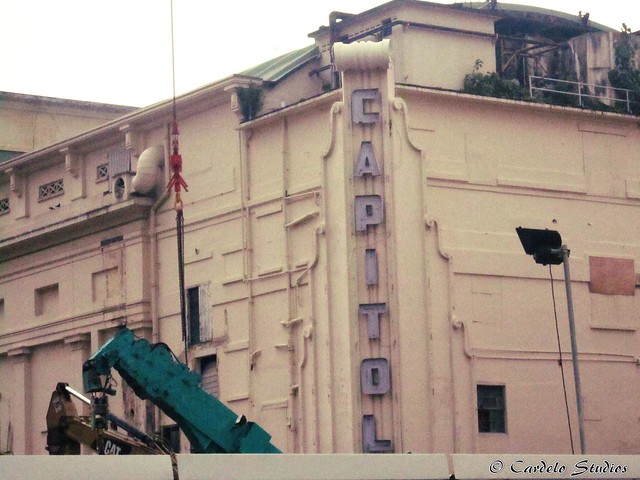 The building was gazette for conservation in 2007, together with the adjacent Stamford House. 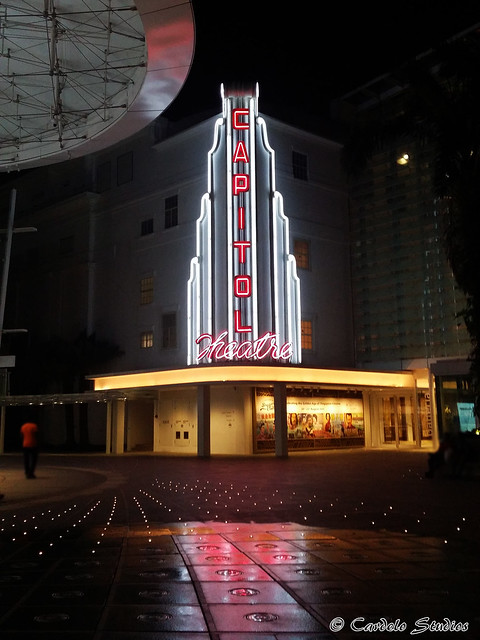 In 2011, a redevelopment project consisting of Capitol Building, as well as the adjacent Stamford House and Capitol Centre, was initiated. Capitol Centre was demolished, while the other two conserved buildings were refurbished. 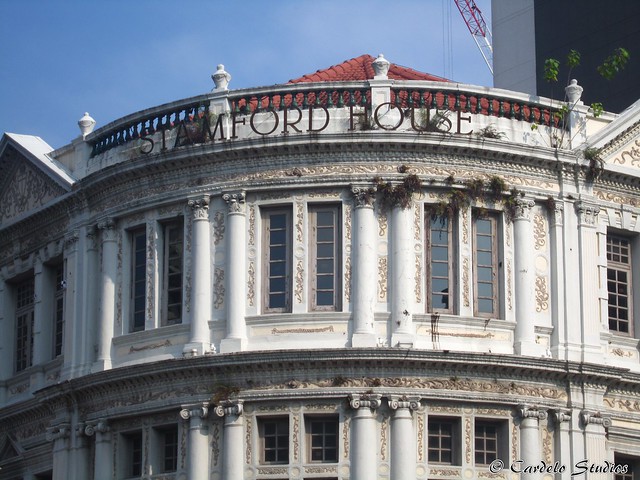 This Venetian Renaissance building was known as the Oranje Building when it was completed in 1904 for Singaporean Seth Paul. It was occupied by a retail firm Whiteaway Laidlaw & Co. until 1910, when Raffles Hotel took over the top two floors as an annex. 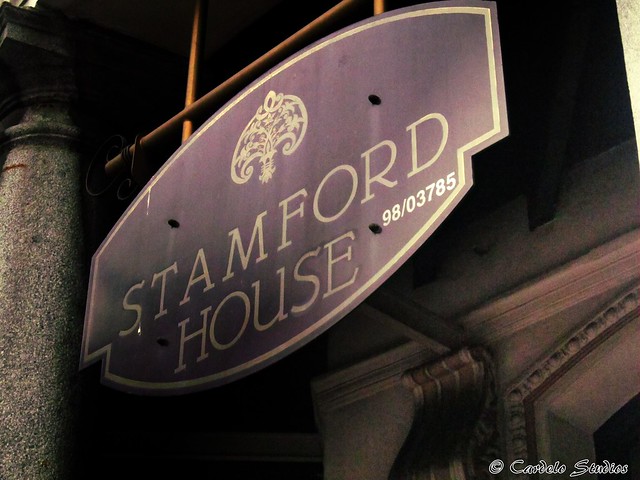 In 1933, Seth’s daughter Theodara Van Hein converted the building into the Oranje Hotel. It was sold to Basaco Enterprise Private Limited in 1963, when it gained its current name. 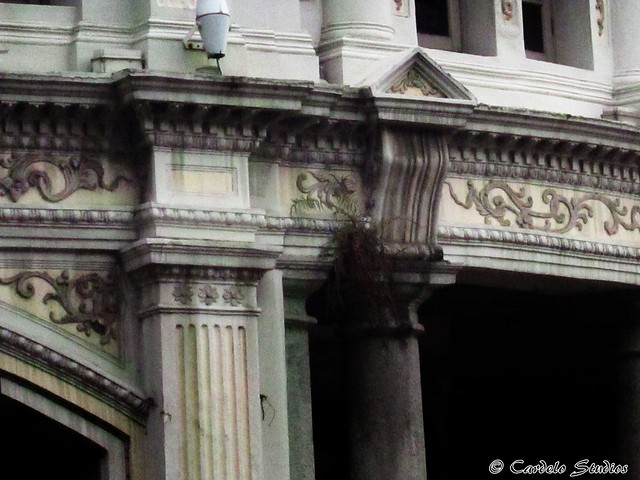 The URA took over the building in 1984, and was opened as a furniture shopping mall in 1995. It has since closed down. 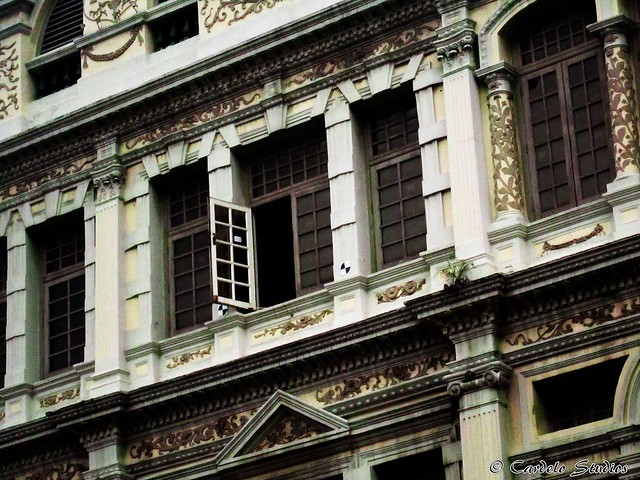 On my latest visit, most of the windows were removed

The Stamford House can be easily identified with its keystone arches and Venetian windows. Its fine detailing on the facades is a stark contrast to the Capitol Building. 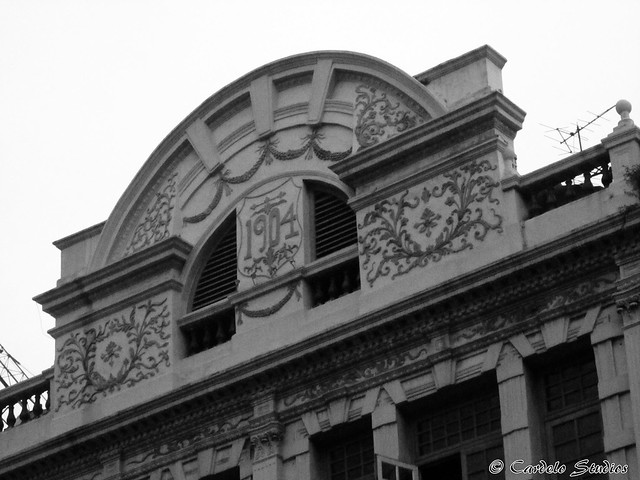 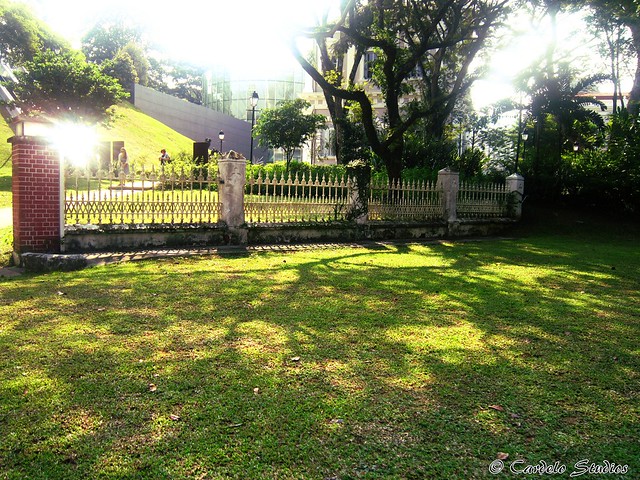 The gate of the National Library building

The iconic red brick building was declared open in 1960 by then Head of State of Singapore, Yusof bin Ishak. It was funded by Chinese philanthropist Lee Kong Chian (李光前), son-in-law of Tan Kah Kee. It housed the library that originally occupied the western wing of the Raffles Museum (now National Museum of Singapore). When the building, designed to reflect the red-brick epoch of British architecture of that time, was first completed, it was hit with criticisms. In particular, it did not harmonise with the adjacent museum building.

The building had a total floor area of over 10,000 square metres. It housed facilities such as an exhibition hall, a children’s activities room, a lecture hall, microfilm reading room, and a five-storey stack for research materials. There was also a courtyard space between the buildings.

In 1989, plans for a new National Library building first surfaced. 3 years later, plans for the Fort Canning Tunnel to be built at the location of the library building were announced in the Civic District Master Plan, though there was no mention of the consequential fate of the building. The library underwent a S$2.6 million upgrade and renovation in 1997. One year later, the Singapore Management University (SMU) announced the campus premise of the new university, which included the site of the library. This triggered a chain of events that led to an outcry from the public to save the building, a stark contrast to the outcry when the building was initially completed.

Despite the public dissent, the building was torn down in 2005 after the new building at Victoria Street was completed. Only the front gate remains at the site. 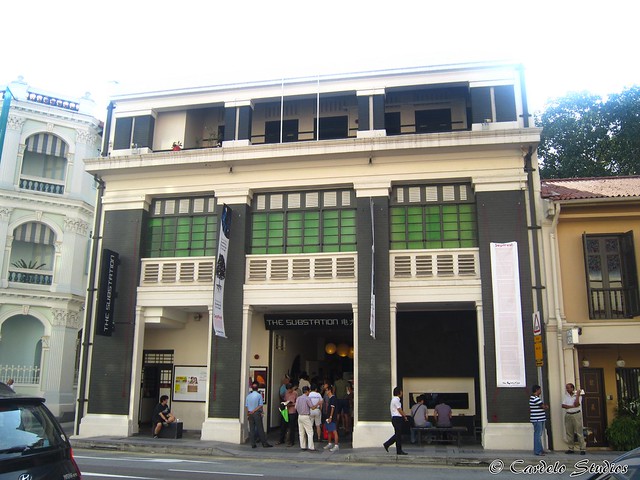 The Substation is Singapore’s first independent art centre, started by leading local theatre practitioner Kuo Pao Kun (郭宝崑). It is located at the building of a former power sub-station, built in 1926, hence its name. The sub-station was closed in the late 1970s, and in 1986 it was identified by URA for conservation, together with the adjacent shophouses and the old Tao Nan Building. It was renovated and officially opened as The Substation in 1990.

It houses a black box theatre, a gallery, a dance studio and classrooms. The garden occupied by Timbre now was also a site for live events and flea markets. 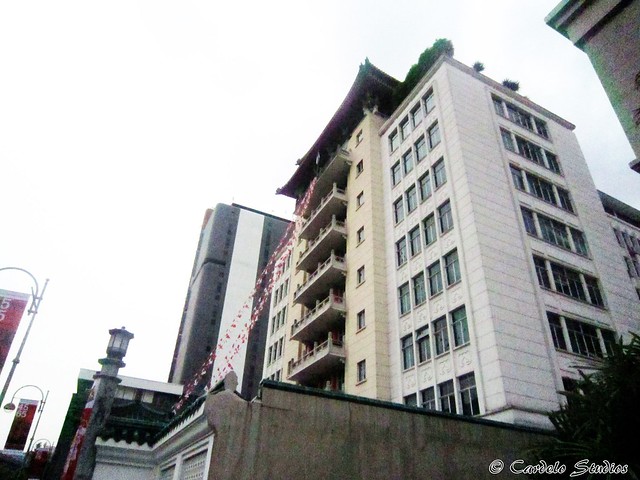 The Singapore Chinese Chamber of Commerce & Industry (SCCCI) was formed in 1906 to look after the Chinese business community as a whole, rather than as individual clans and associations. Since then, it has evolved to support other Chinese-related activities such as education and culture. 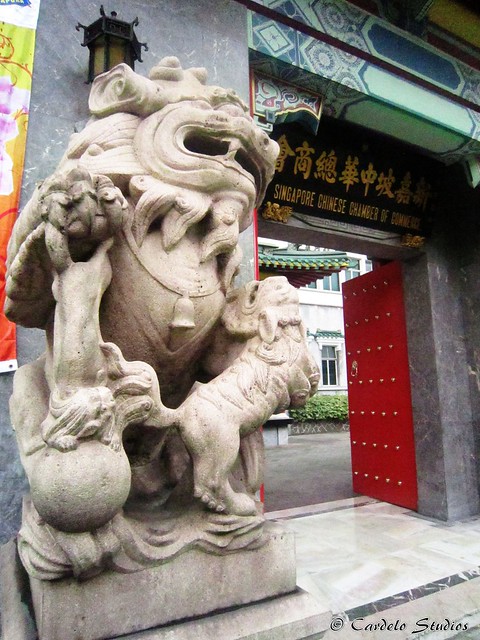 Entrance to the SCCCI building

The SCCCI building was completed in 1964 to replace the old two-storey building which also housed the SCCCI headquarters. It was built in the Chinese National style, a style prevalent in Singapore in the 1900s as an architectural expression to unite the various Chinese clans and dialect groups, representing one single modern Chinese identity. It is influenced by the architectural styles adopted by Republican China. The building is primarily modern in terms of construction style and materials, but is ornamented with Chinese-style roofs and eaves. 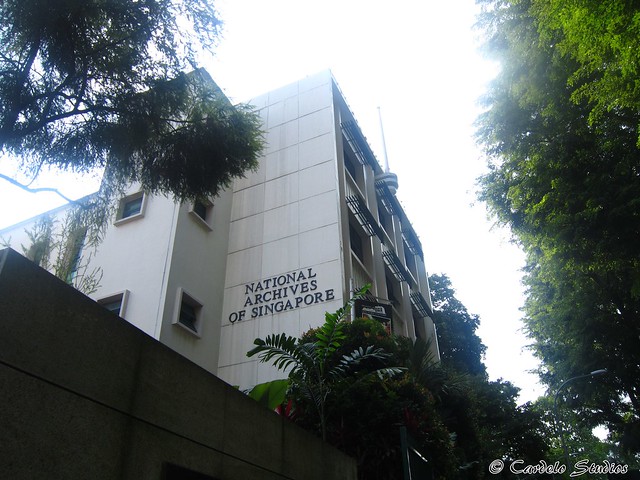 The National Archives of Singapore was established in 1968, in charge of preserving the archives of Singapore dating back to the 1800s. It was first located in the National Library, before moving to Fort Canning. In 1980, it then shifted to the Old Hill Street Police Station. The NAS finally moved into the current building in 1997.

The building was originally the Anglo-Chinese Primary School. It was completed in 1893, and underwent 3 extensions before moving out in 1993. 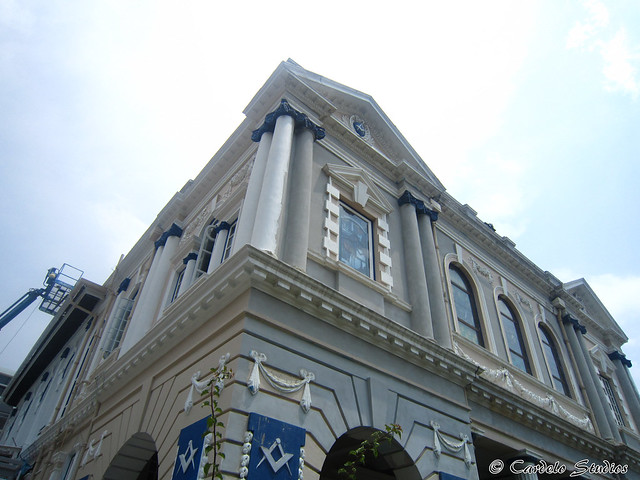 This English Renaissance building was completed in 1886, as a Masonic Lodge for the freemasons in Singapore. Freemasonry first started in Singapore in 1845, and Masonic meetings were held at various locations prior to the completion of this building. For many years, the building was known as rumah hantu, or “haunted house”, as few knew of the activities and ceremonies that were held in this exclusive clubhouse. Non-members are only allowed to enter the ground level. 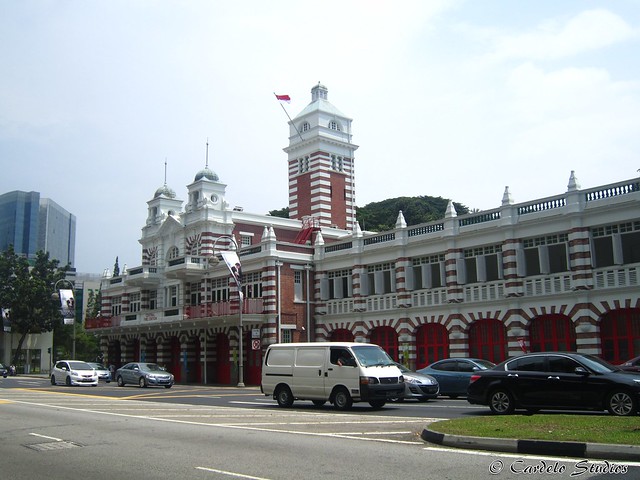 The Central Fire Station, or Hill Street Fire Station, was completed in 1909, and is the oldest surviving fire station in Singapore. Its distinctive façade colour is due to the exposed red bricks and bricks that are plastered over and painted white. During WWII, the building was painted green to avoid being a target of Japanese bombing. 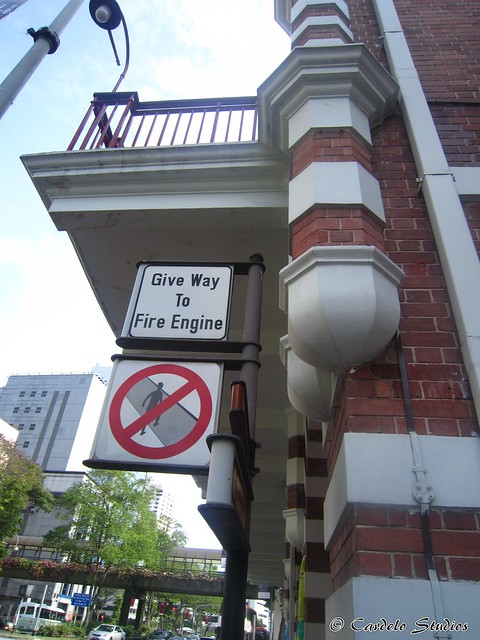 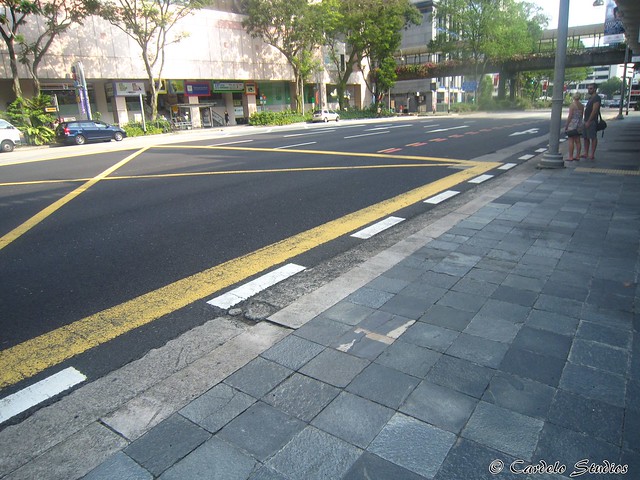 The first station has been in operation ever since its inauguration, even during the Japanese Occupation, when 8 of the firefighters and 27 of the auxiliary force personnel avoided imprisonment and were allowed to run the fire station. 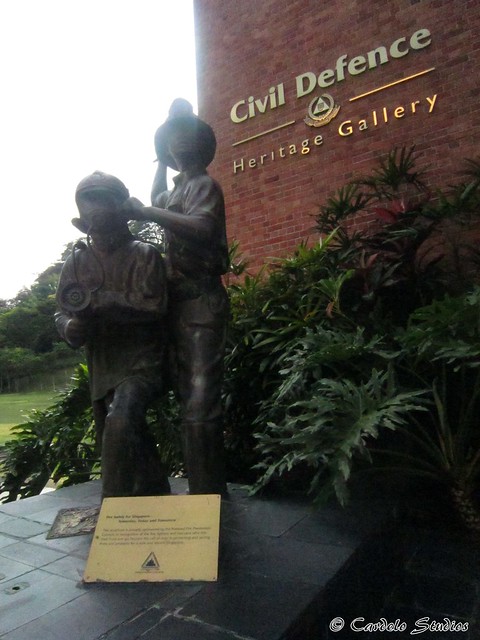 The Civil Defence Heritage Gallery, located in the fire station

The building was declared a national monument in 1998. This led to the setting up of the Civil Defence Heritage Gallery, which opened 3 years later.

One response to “Bras Basah Bugis”