As mentioned in my previous post, the Bras Basah – Bugis area was one of the earliest spots that were developed after Singapore was founded. In this last of the series of 3 posts on this district, I’ll be sharing photos of the places of worship that have been established over the years. 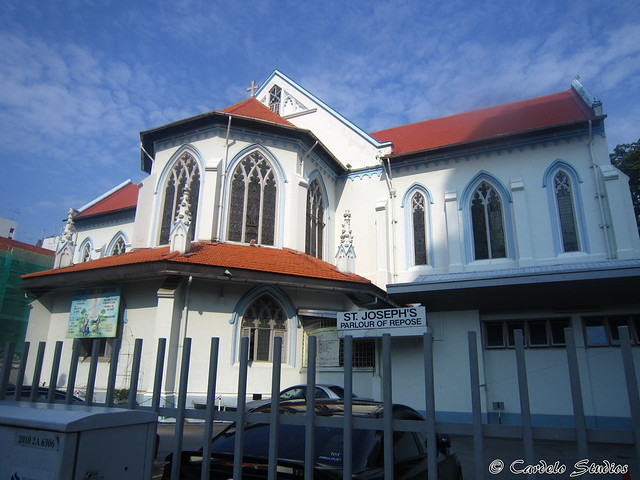 St Joseph’s Church is a Roman Catholic Church along Victoria Street, founded by the Portuguese Mission. The Portuguese were amongst the first Catholics to arrive in Singapore after its founding. Prior to the construction of the church, the Mission built another small church at the same site, known as Church of São José, in 1853. It was torn down in 1906 and the current church building was completed 6 years later. 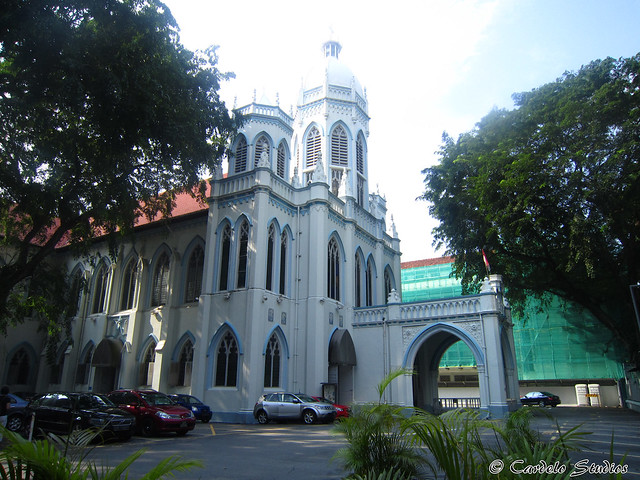 This classical-style building was designed in the form of a Latin cross on plan. It’s most recognisable feature is the central octagonal tower with a cupola dome. 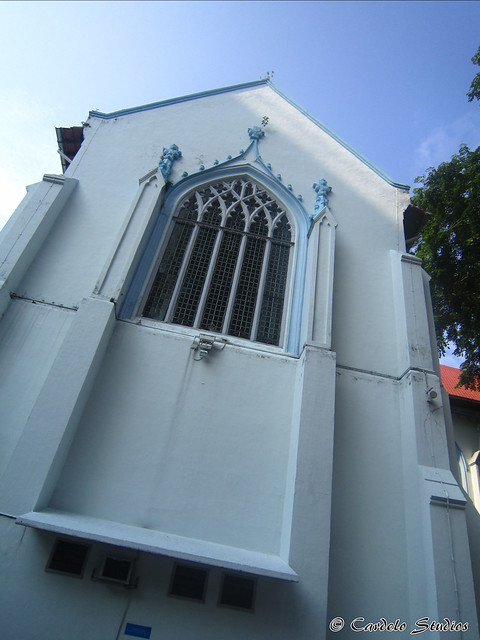 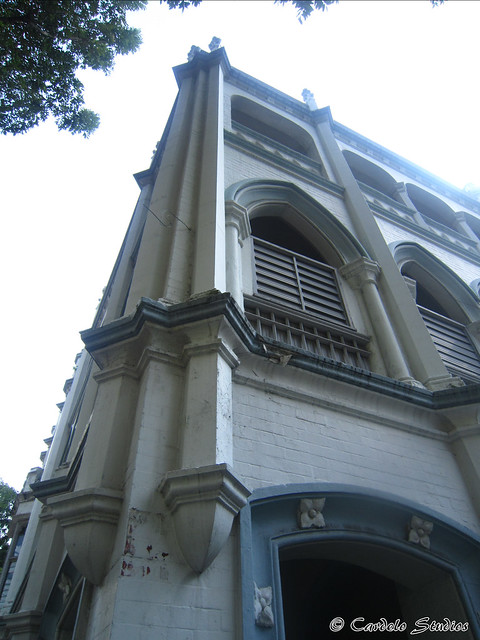 Next to the main building, along Victoria Street stands the Priest House, built in 1912. Its ground floor corridor forms part of the common walkway along the street. 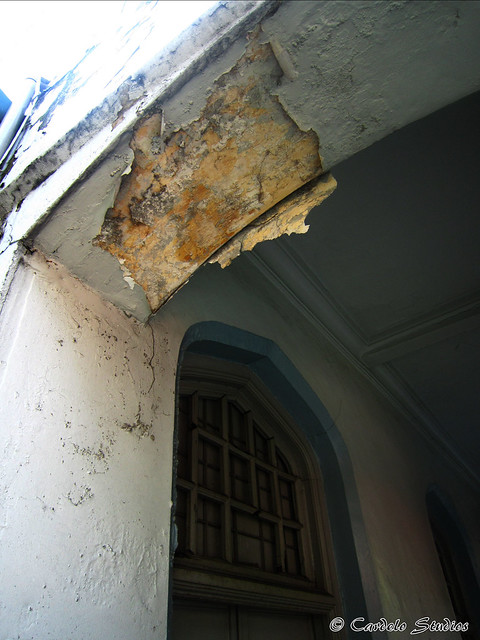 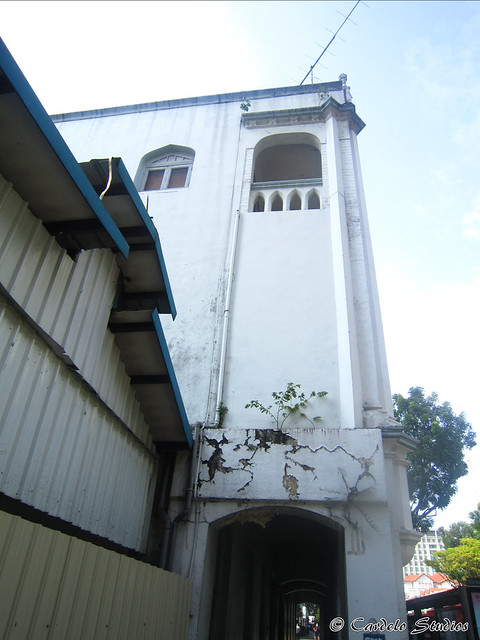 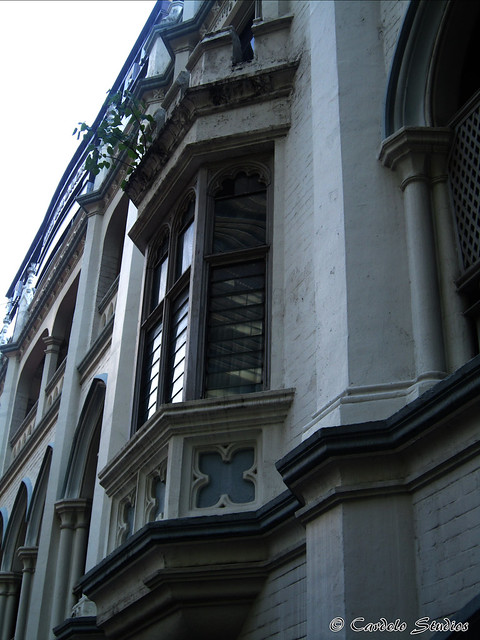 All the buildings were gazetted for conservation in 1993, within the Queen Street Conservation Area demarcated by URA. The church building was gazetted a national monument in 2005. 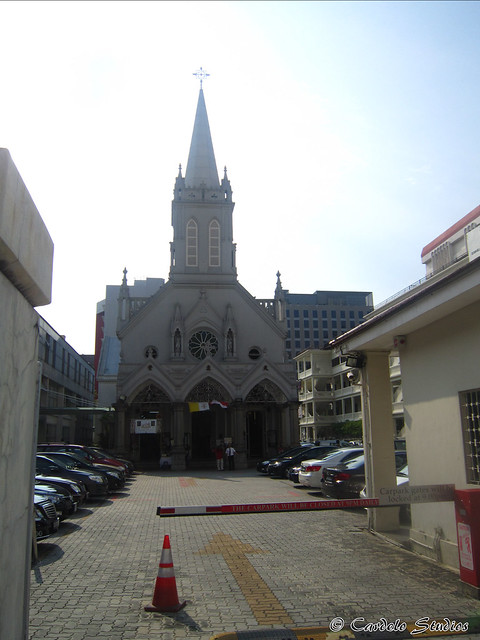 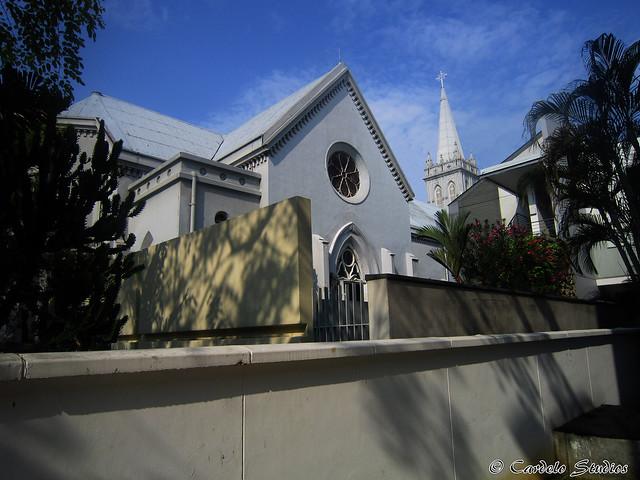 This Roman Catholic Church between Queen Street and Waterloo Street was built in 1870 for the Chinese and Indian Catholic community who used to congregate at the Cathedral of the Good Shepherd. It was built in the tropical Gothic style, and its façade features the statues of Saint Peter and Saint Paul. It was gazetted a national monument in 2003. 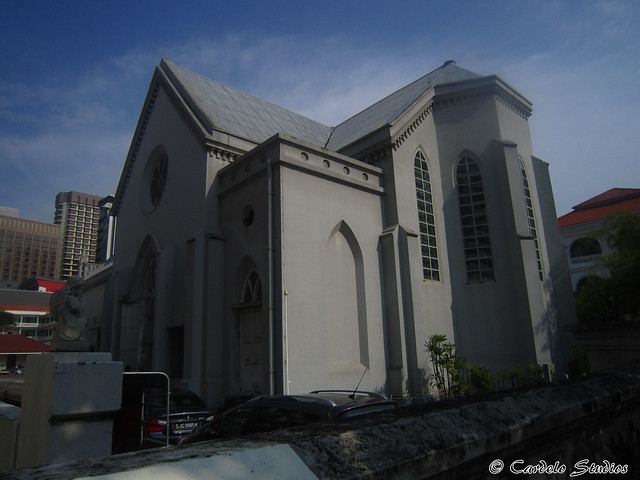 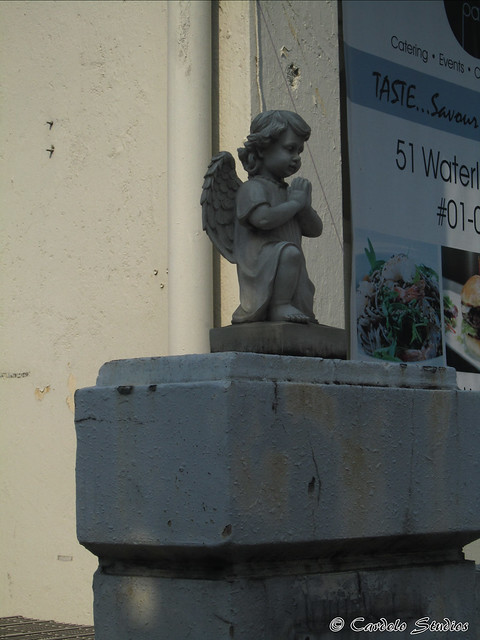 Small statue of an angel, located at a corner of the church compound 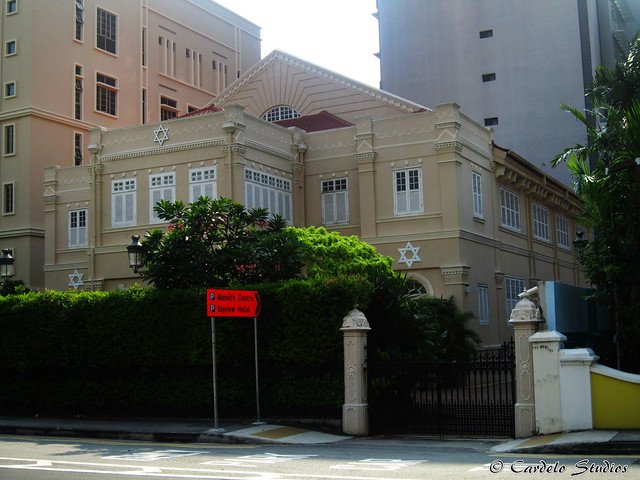 On the other side of Waterloo Street stands the Maghain Aboth Synagogue, a symmetrical neo-classical building built in 1878. Prior to this, the Jewish community congregated at Singapore’s first synagogue at Synagogue Street.

The synagogue was originally a single-storey building, but a balcony was later added on the second storey for female members of the community during the prayer service. It also has a sunk-in well for use as a mikvah (מקווה; ritual bath). The ritual hall is oriented towards Jerusalem.

In 1998, the synagogue was gazetted a national monument.

Cathedral of the Good Shepherd
Designed by Denis Lesley McSwiney
Constructed: 1843 to 1847
Status: Found
Preserved: Since 1973 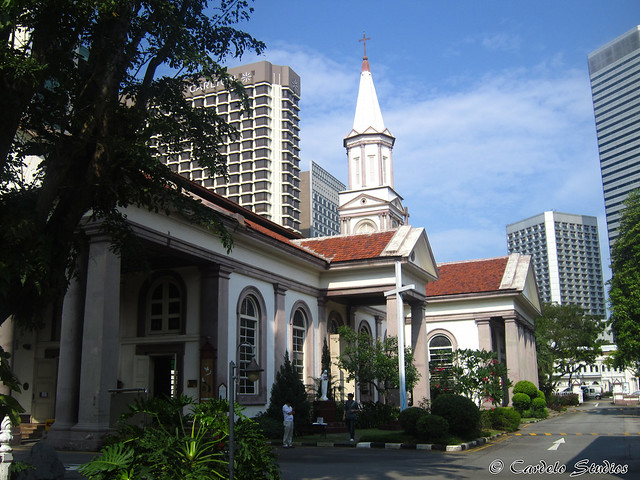 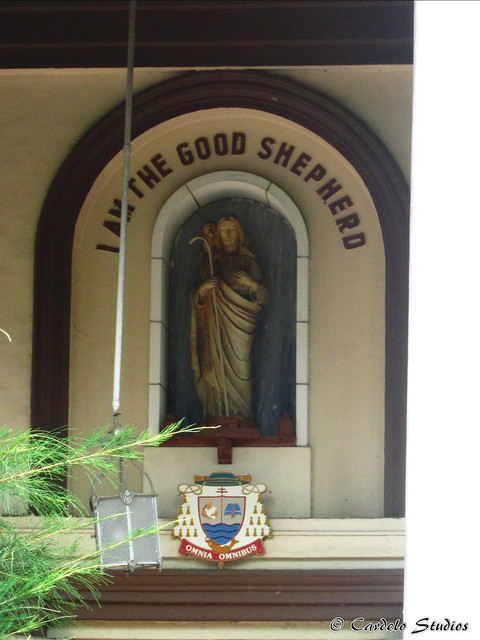 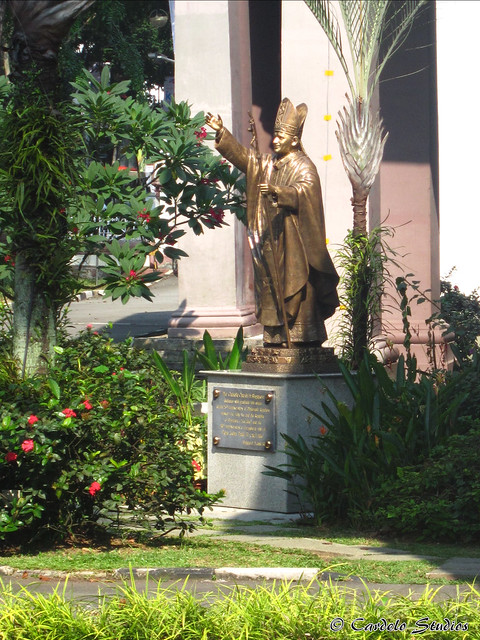 The Church of the Good Shepherd was constructed from 1843 to 1847 to replace Singapore’s first Roman Catholic house of worship at the former site of St Joseph’s Institution. The design was said to be inspired by G. D. Coleman’s St Andrew’s Cathedral (Denis McSwiney had worked for Coleman as a clerk prior to this). It was designed in a restrained Renaissance style, and its plan is also in the form of a Latin cross, similar to St Joseph’s Church. 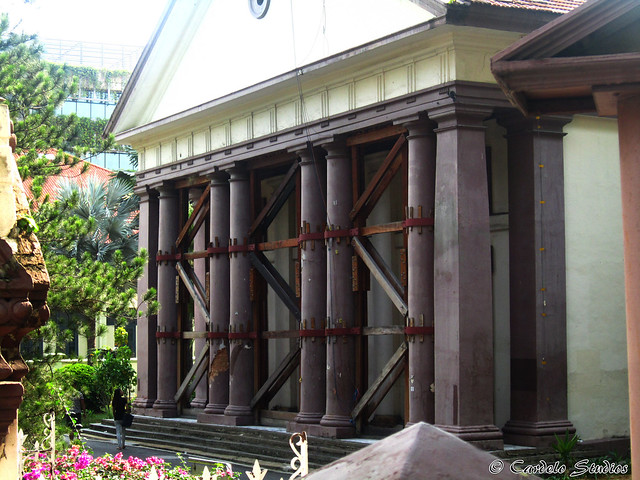 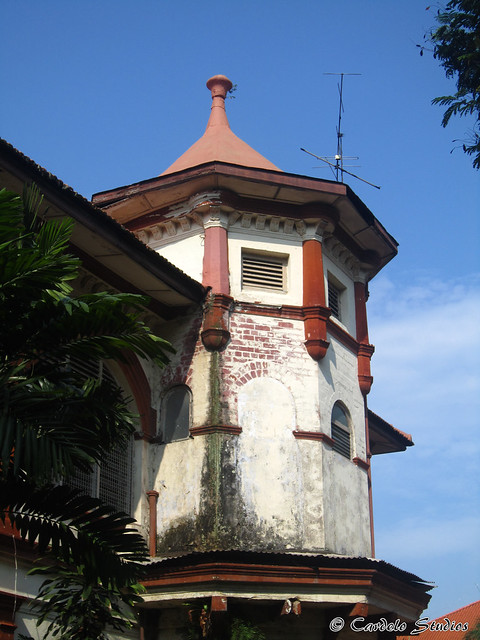 In 1888, the church was elevated to the status of cathedral. 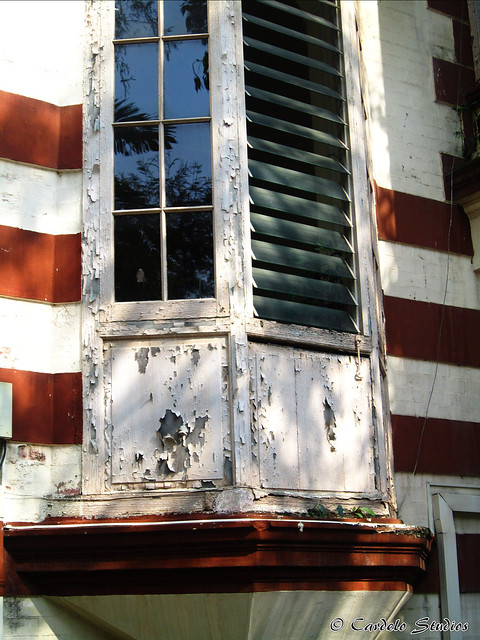 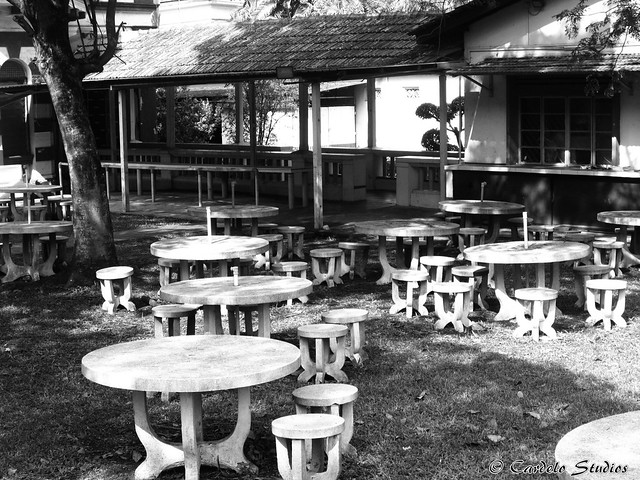 The cathedral was gazetted a national monument as early as 1973. It was closed for renovation in October 2013, and will be reopened in two years’ time. 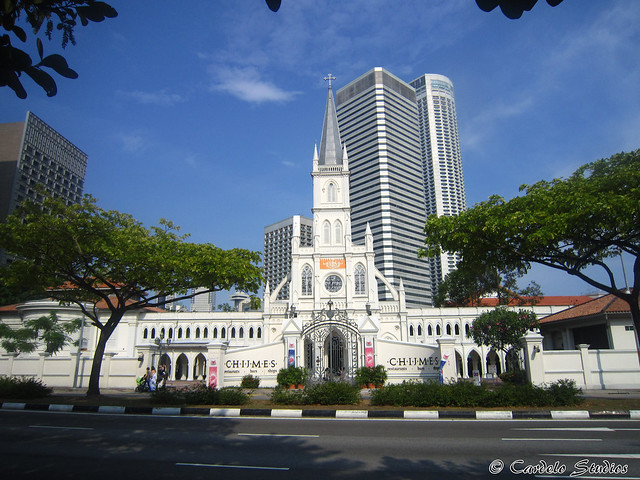 CHIJMES is a retail and F&B complex that consists of various buildings constructed in different times. The oldest building is the Caldwell House, constructed in 1841 for magistrate’s clerk H. C. Caldwell. In 1854, 4 French nuns, led by Mother Raclot, bought over the building and conducted lessons in it. The school was known as the “Town Convent”.

The convent acquired adjacent plots of land in subsequent years, including land that belonged to Raffles Institution. In the late 1800s, Father Nain, who served as a priest in the Church of St Peter & St Paul and architect of the St Joseph Institution extension wings, was engaged to design a new chapel. The chapel was completed in 1904.

A new block of classrooms were built in 1931, and was known as the Victoria Girls’ School, and then the St Nicholas Girls’ School.

In 1983, the government acquired the land from the convent. The chapel served as a religious place of worship for the last time, and the school were relocated to Toa Payoh. The classroom building was demolished for the MRTC (now SMRT) headquarters. The Caldwell House and chapel were gazetted as national monuments in 1990, and together with the orphanage building, reopened as CHIJMES in 1996. 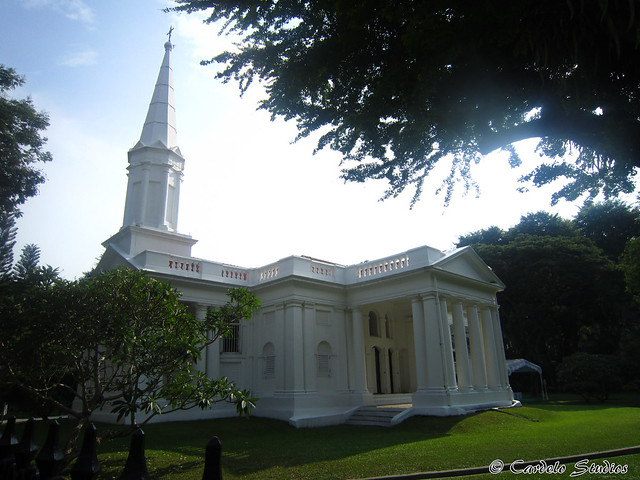 The Armenian Church is the oldest surviving church in Singapore. It was built in 1835 with funds from the small local Armenian community. It is considered one of the best works of G. D. Coleman. Its design is inspired from St Gregory in Etchmiadzin, Vagarshapat in Armenia, and the symmetrical Palladian architecture is blended with vernacular climatic features such as wide verandahs and louvred windows. It featured an octagonal cone supporting a bell turret. However, the bell turret was deemed structurally unsafe, and was replaced by the spire that we see today. 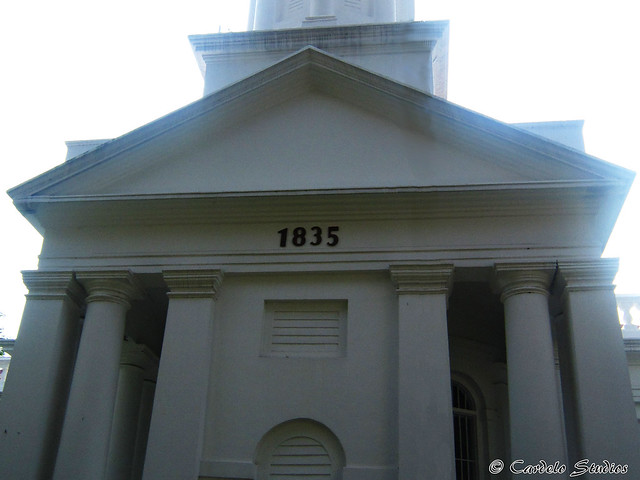 The year of construction is indicated on its façade

Armenian Street was so named due to the church that situated along it. The street was also known as seng poh sin chu au (behind Seng Poh’s new building) among the Chinese.

Notable Armenians in Singapore include the Sarkies family who opened the Raffles Hotel, and Agnes Joaquim, whom Singapore’s national flower was named after.

The church was gazetted a national monument in 1973. 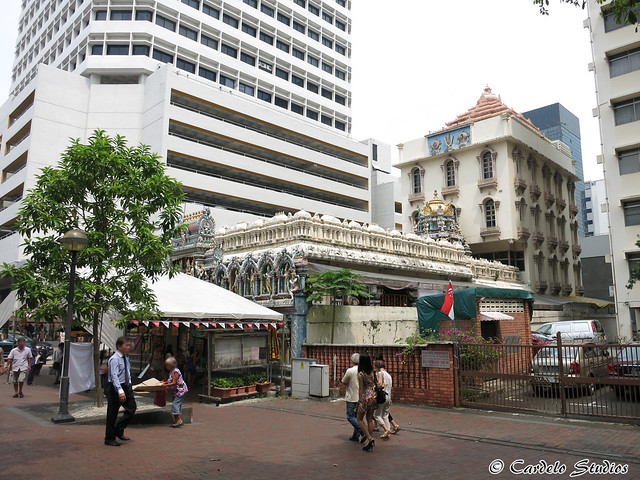 Sri Krishnan Temple is one of the more interesting places of worship in this area, in my opinion. Dedicated to the Hindu deity Sri Krishna, its location next to the Kwan Im Thong Hod Cho Temple resulted in a sight that is seldom seen elsewhere. Many Chinese devotees who visit the Kwan Im temple would also light joss sticks at Sri Krishnan Temple. Eventually, the management decided to build an altar dedicated to Kwan Im within the temple grounds. The resulting co-existence of Hindu and Buddhist deities within the same religious venue is a reflection of the harmonious multi-religious society in Singapore. 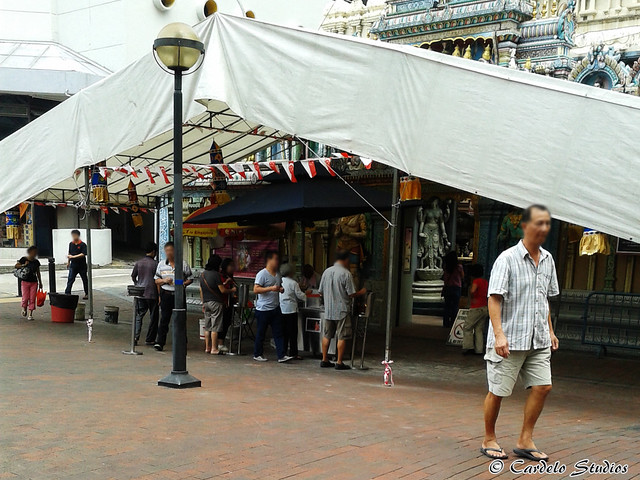 The history of the temple can be traced back to 1870, when a man named Hanuman Beem Singh placed an idol of Sri Krishna under a banyan tree at the exact location where the temple now stands. The tree shrine catered to the Hindu population around Bras Basah. 10 years later, he passed the management to his son, Humna Somapah, who built a fence around the tree to demarcate the shrine area. In 1904, Humna Somapah’s niece, Joognee Ammal, took over. She funded the construction of the main shrine of the temple. In 1935, Pakirisamy Pillay took over the management, and oversaw further developments of the temple. Pakirisamy Pillay is the son of Tamil businessman Koona Vayloo Pillay, who was buried in Bidadari Cemetery. 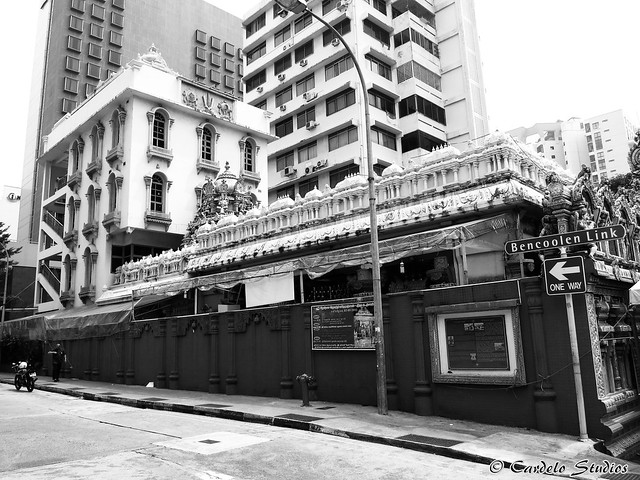 The four-storey ancillary block, built in 2002, can be seen at the back

The temple was gazetted for conservation under the Master Plan 2014.