The Kranji Heritage Trail was conceived by the National Heritage Board, and introduced in late 2011. It links up 14 historical and farm sites in Kranji and Lim Chu Kang. The Kranji area was named after the Kranji Tree, a local tree that was commonly found in Singapore in the early 19th century. 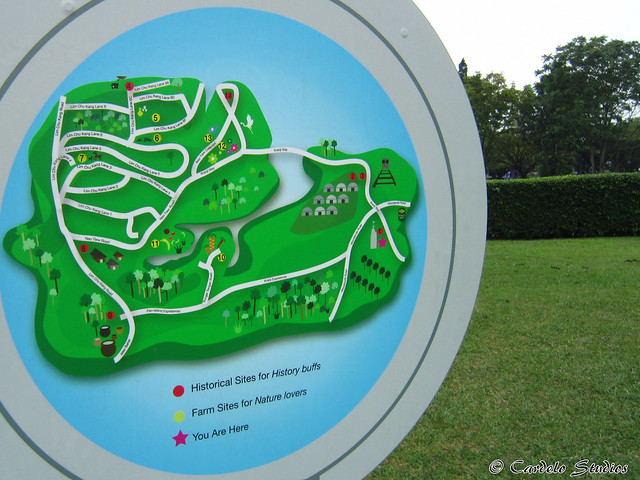 Unlike what its name suggests, there is no single route connecting all 14 sites. Instead, they are scattered rather far apart, and it is unlikely for anyone to walk to all 14 sites at one go. I’ve visited a few of the historical sites on a few separate trips, and here’s a compilation of some of the photos I took. 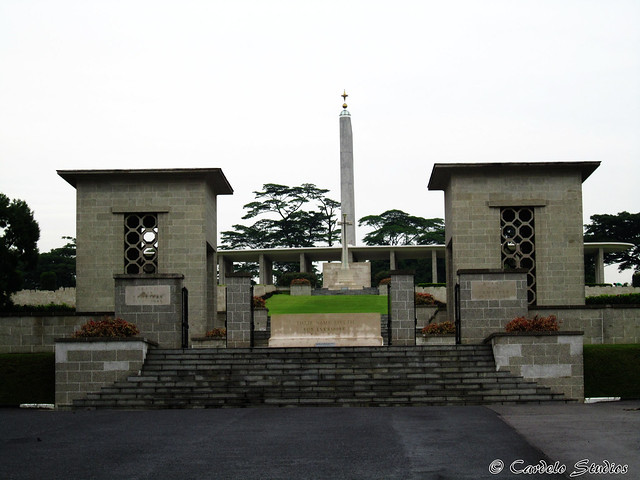 Prior to WWII, this area was part of a British military base. When the Japanese took over, it became a POW hospital, and the land around it became a small cemetery. After the Japanese surrendered, the British decided to convert it into a war cemetery. 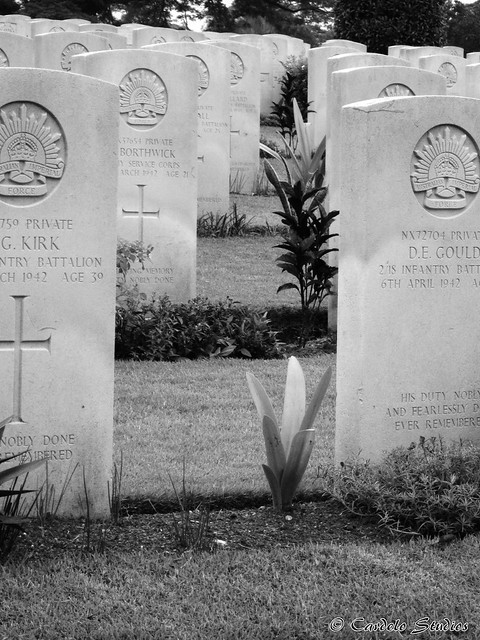 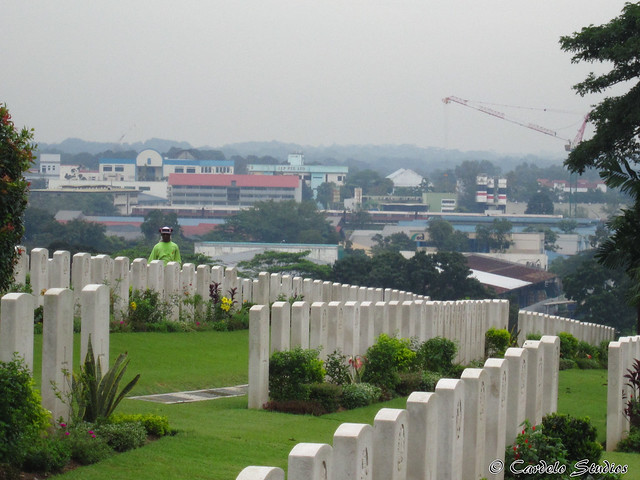 The cemetery overlooks the industrial areas 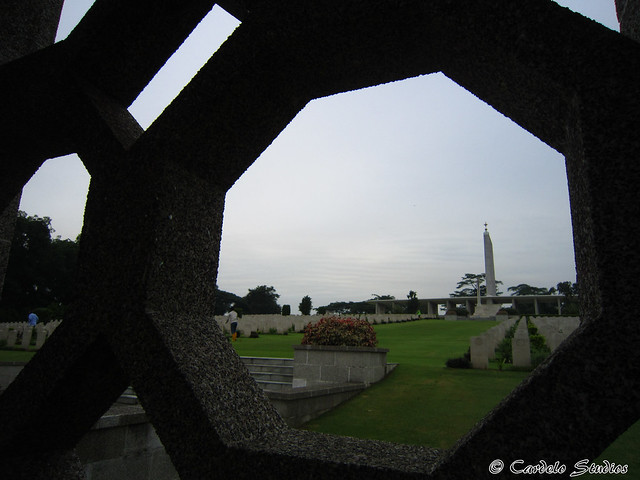 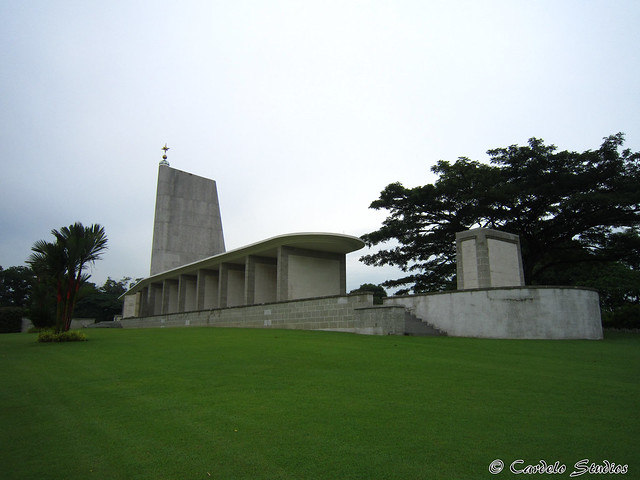 The main memorial, the Kranji War Memorial, was unveiled in 1957. The vertical wall columns of the memorial represent the Army marching in formation, while the roof plane resembles wings and represent the Air Force. The Navy is represented by the central tower, which resembles the periscope of a submarine. 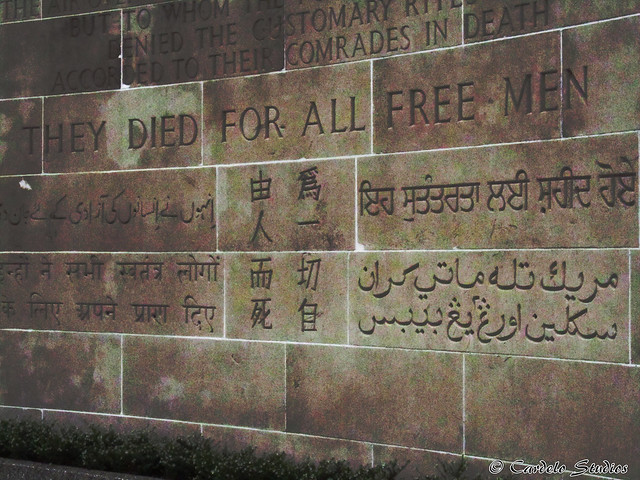 ”They died for all free men”

On the walls are names of over 24,000 allied servicemen who perished during the war and whose bodies were never recovered. 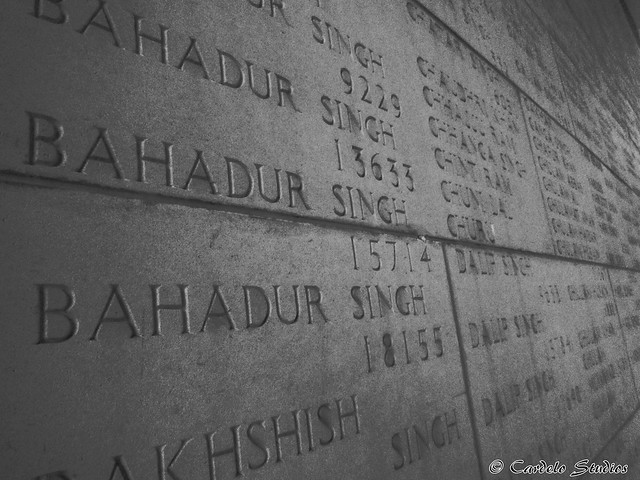 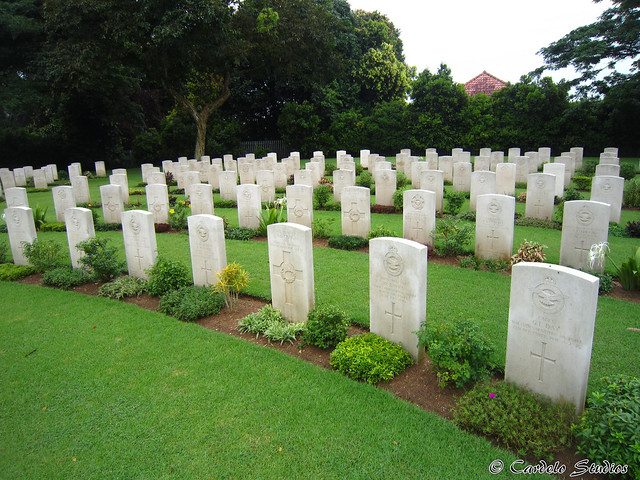 In addition to servicemen and civilians who died during WWII, the cemetery also has graves for servicemen who sacrificed during WWI and the Konfrontasi. 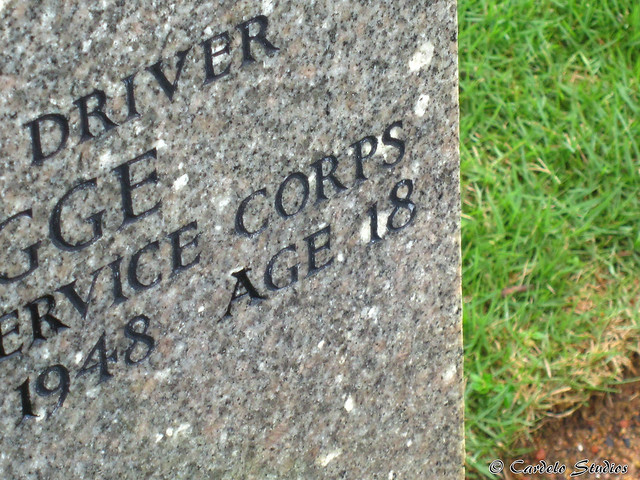 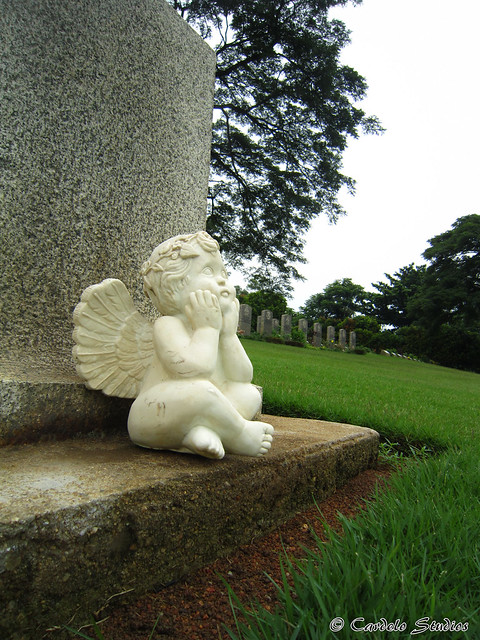 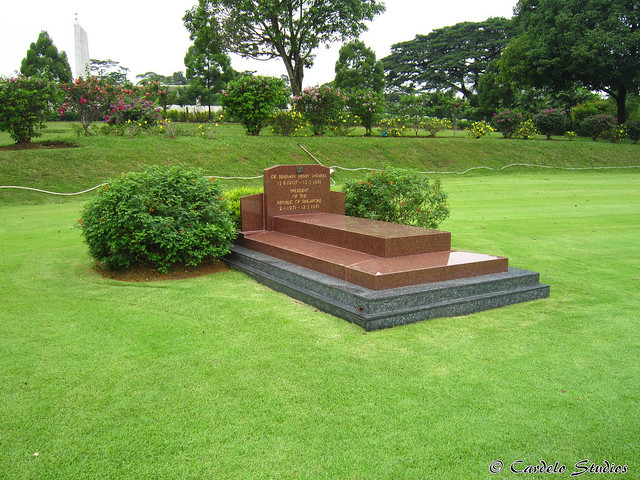 Within the same compound is the Singapore State Cemetery, where the first two presidents of Singapore were buried. The grave of Benjamin Sheares is clearly visible on the right side when you enter. I failed to spot the grave of Yusof bin Ishak though. 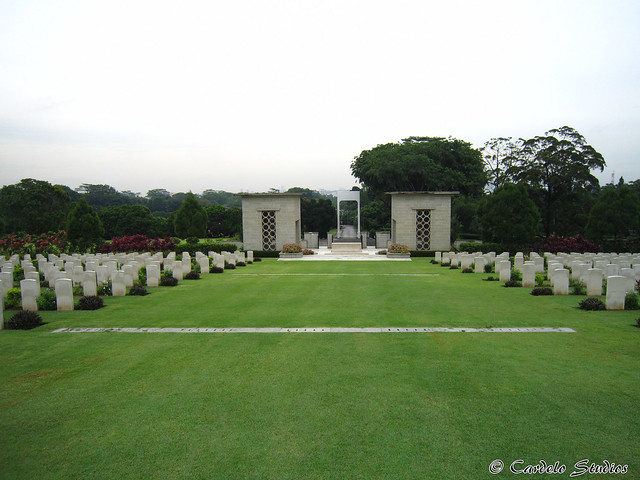 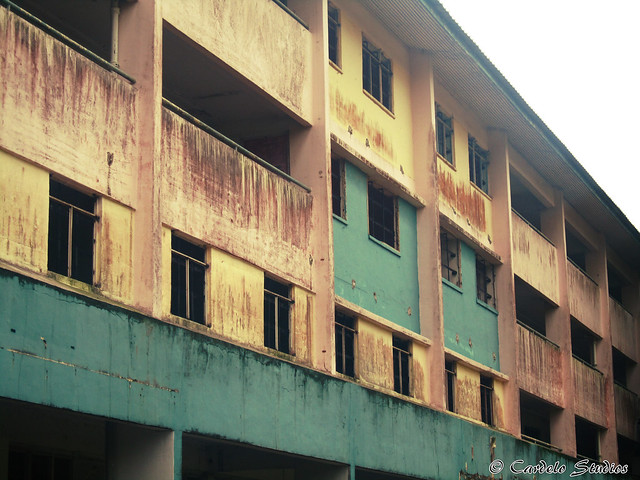 Neo Tiew Estate, or Lim Chu Kang Rural Centre, was built in 1979. It is located at the junction of Lim Chu Kang Road and Neo Tiew Road. A number of HDB estates from that period were known as “Rural Centres” as they housed relocated farmers who were allowed to continue with their farming activities. This housing scheme was stopped soon after to encourage Singaporeans to take up non-agricultural related jobs. 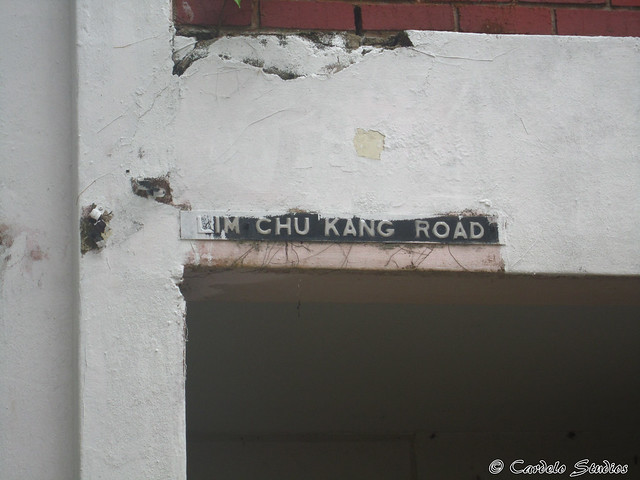 It was also known as Lim Chu Kang Rural Centre

Neo Tiew Estate was named after Mr Neo Tiew (梁宙), who contributed greatly to the development of the village in the early 1900s. He contributed to the paving of the road (which would later be named after him), set up the first mini-mart in Lim Chu Kang (Nan He Mini-Mat at Nam Hoe Village, or 南和村 in Mandarin, located along New Tiew Road, near Turut Track) and started the Kay Wah Chinese School (公立启化学校). He also risked his life to protect the settlement from the invading Japanese during WWII. 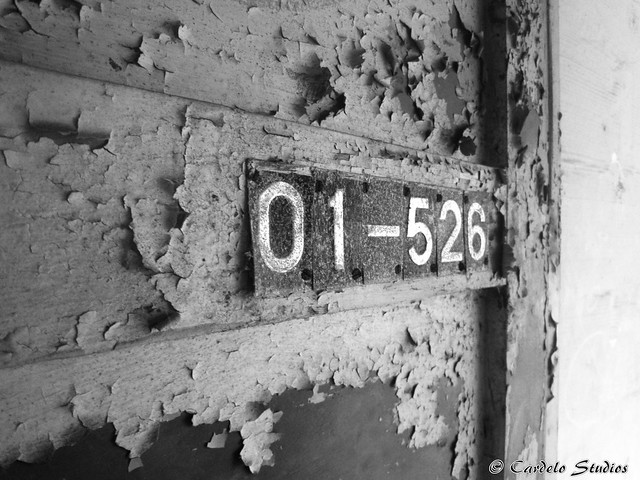 Used as a location for urban warfare training, the place is not maintained at all

The main school of Kay Wah Chinese School, for upper primary levels, was located at Thong Hoe Village (通和村). Branch I (启化第一分校) was at Ama Keng Village (阿妈宫村), and Branch II (启化第二分校) was at Nam Hoe Village. The 2 branch schools were for lower primary levels. The 3 schools have since been reunited as Qihua Primary School (启化小学; “Kay Wah” was the Hokkien pronunciation) and is currently located in Woodlands.

Thong Hoe Village was located on the other side of Lim Chu Kang Road, along Sungei Gedong Road (now within Sungei Gedong Camp area). Ama Keng Village was at the junction of Lim Chu Kang Road and Ama Keng Road. Both the road and the village were named after the temple that was founded at that location in 1900. It was dedicated to the holy mother, the goddess of peace and happiness. In Hokkien, ama means “grandmother” while keng means “temple”.

Ama Keng Village also had another school, known as Ama Keng School (亚妈宫学校), which was founded in 1951 and merged with Nam San School (南山学校) in 1990 to form South View Primary School (南山小学). It is currently located at Choa Chu Kang.

Two more school were located in the vicinity back then. Lim Chu Kang Primary School and Loke Yang School (洛阳学校; not to be confused with the current Loyang Primary School) were located further up north from Thong Hoe Village, along Lim Chu Kang Road. In addition to schools, these villages were also served by community centres. All these no longer exist today. The following is a map that shows the approximate locations of the villages, CCs and schools. 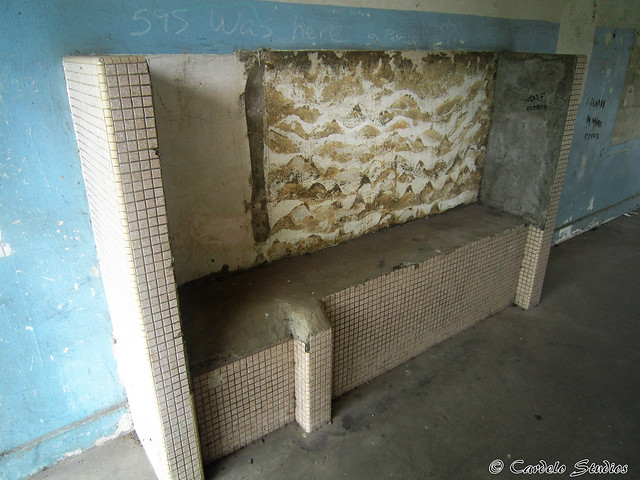 The letterbox has been removed

In 2002, the estate underwent en-bloc and the residents were relocated to Boon Lay Drive. The estate then became a FIBUA (fighting in built-up areas) military training ground until the completion of Murai Urban Training Facility near Murai Reservoir in 2008. The estate was recently used as a filming location for Jack Neo’s latest BMT-themed film, Ah Boys To Men. 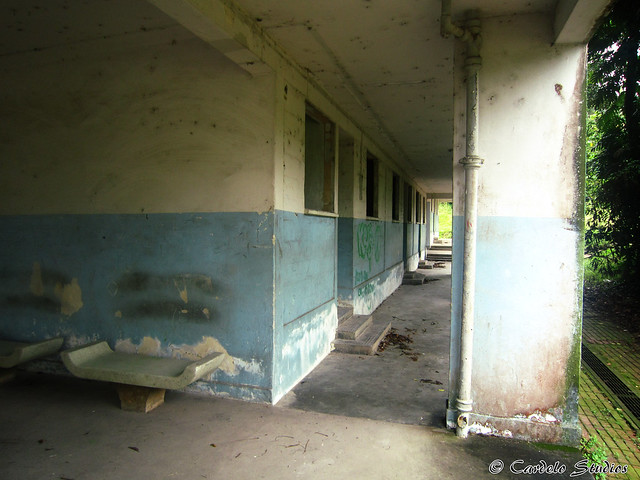 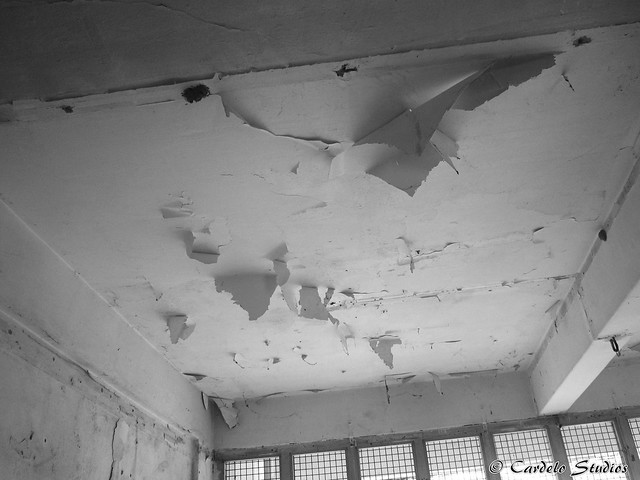 The estate, often referred to as the “abandoned Kranji HDB flats” by netizens, consists of 3 blocks of flats surrounding a wet market. Shophouses were located on the ground floor of the blocks, and were connected to the dwelling units on the second level. This is a distinctive feature of the Rural Centres not seen in newer HDB estates anymore. 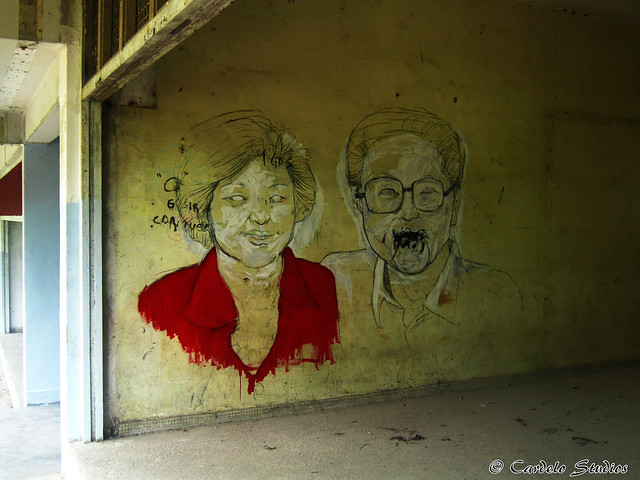 Vandalised by bored soldiers or other visitors?

Lots of graffiti could be seen on the walls. Some were evidently left behind by military personnel undergoing training there, while others seemed to be cult-related. Not surprising for an abandoned estate at such a rural area. 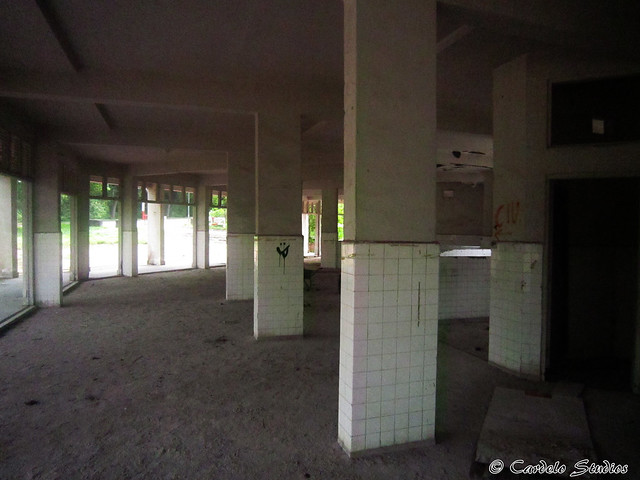 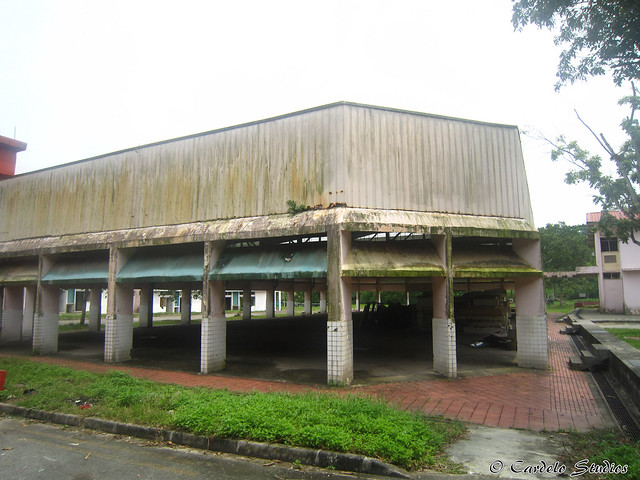 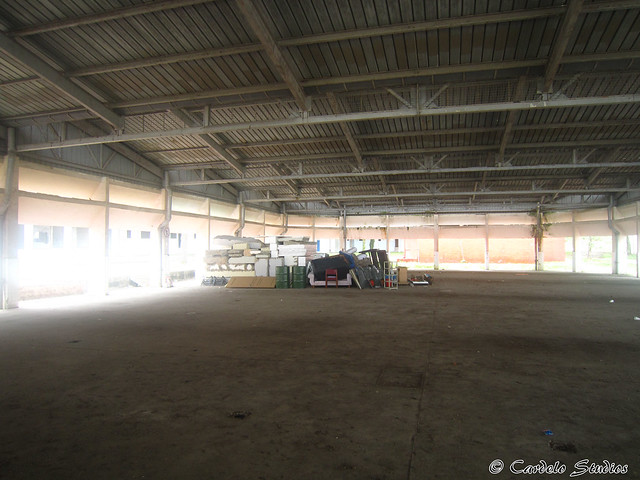 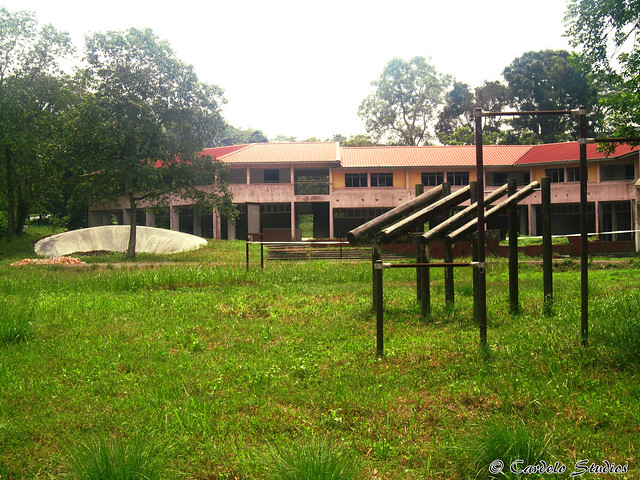 There was also a playground located at the front of the estate, and a fitness corner beside it. 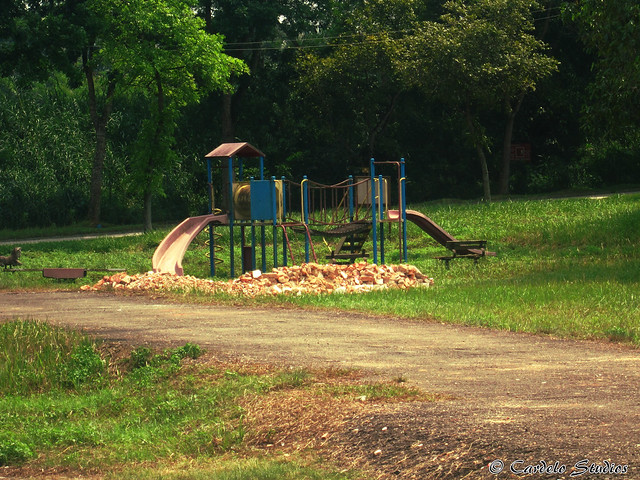 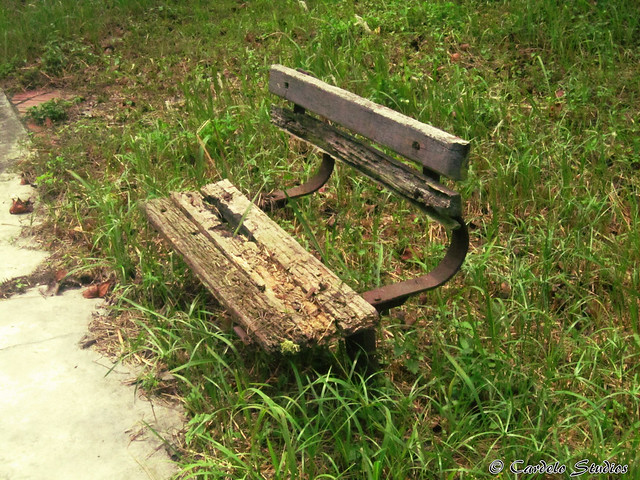 It seems that in 2013, fences were erected around the estate. Hence, it is not advisable to enter the restricted compounds, especially if there is military training going on. 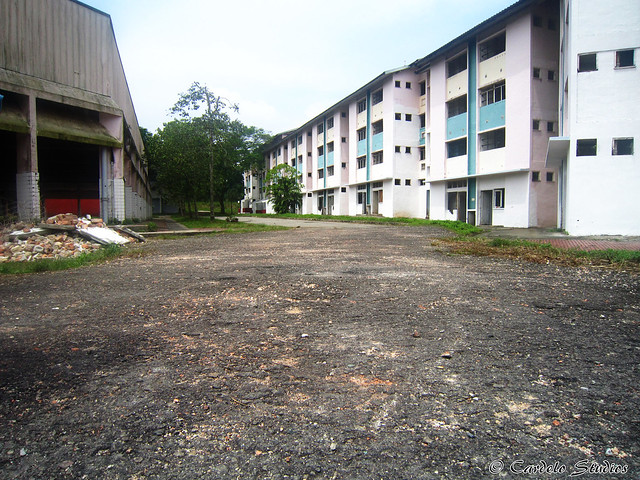 I’ll be uploading my remaining photos of more Kranji Heritage Trail sites in my next post.

This entry was posted in Trails and tagged Found. Bookmark the permalink.