In Malay, telok means “bay” while ayer means “water”. Hence, Telok Ayer Street is named after the bay that was once situated along this street. It continued to mark the coastal line until 1878, when land reclamation began. Mount Wallich and a few other hills along the coast were levelled to reclaim Telok Ayer Bay to extend the coastline to Robinson Road.

Under the Jackson Plan in 1823, Telok Ayer was demarcated for the Chinese community, and the Hokkiens became the primary group to settle there (evident from Amoy Street, named after Amoy – now known as Xiamen – where the Hokkiens originated from). Indian Muslim immigrants also congregated around the area. These immigrants set up numerous places of worship along the coast. Hence, Telok Ayer Street today holds the record for the highest number of national monuments along one street – 6 in total. 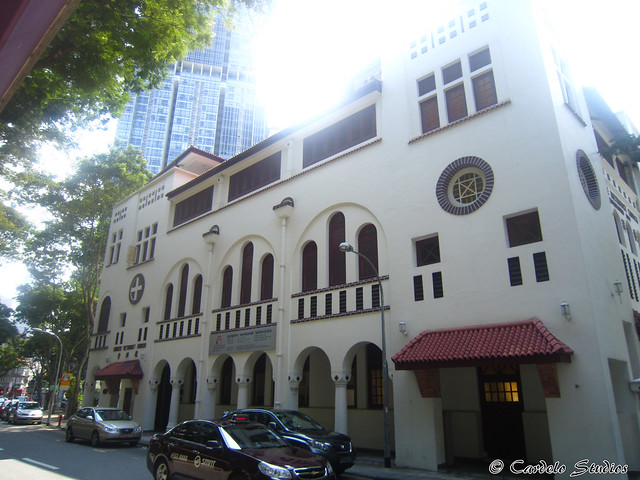 The Telok Ayer Chinese Methodist Church (卫理公会直落亚逸礼拜堂) is one of the earliest Chinese churches in Singapore. It was founded by Dr Benjamin Franklin West in 1889, and was located in a shophouse along Upper Nanking Street (now defunct). It was known then as the Hokkien Church as the congregation mainly consisted of Hokkiens. By 1905, the congregation had expanded to include other dialect groups, and the shophouse had deteriorated. The church thus relocated to Japan Street (now Boon Tat Street), and was then known as Telok Ayer Church. In 1913, the plot of land along Telok Ayer Road, where the church currently stands, was purchased, and services were held there under a temporary tent. The tent collapsed one year later, and the church temporarily occupied the Fairfield Girls’ School at 178 Neil Road (where the Police Cantonment Complex now stands) while a zinc and wooden structure was built. The adjacent plots were acquired in 1921, and the current building was completed 4 years later.

The church has a five-foot way along the west side, presumably connected to adjacent shophouses which have since been demolished.

The Telok Ayer Chinese Methodist Church was gazetted a national monument in 1989. 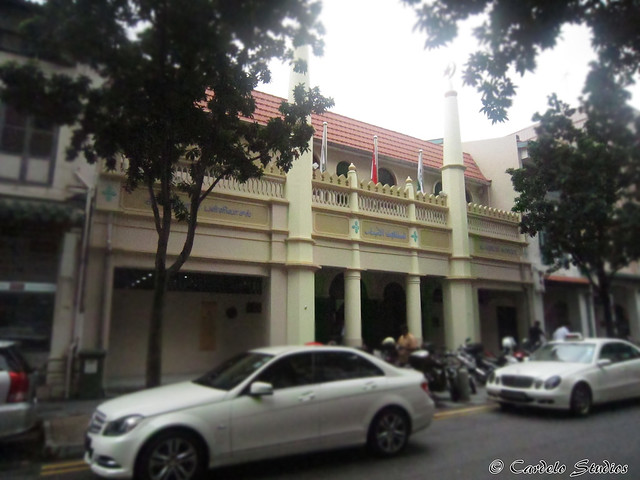 The Al-Abrar Mosque (Masjid Al-Abrar) was established in 1827 by the Chulias – Tamil Muslim immigrants who originated from South India. It began as a thatched hut, and was replaced by the current brick structure in the 1850s. It has a simple façade which flanked with the adjacent shophouses and aligned to the urban grid. At the same time, the mosque is oriented to face Mecca. The five-foot way along the adjacent shophouses is also incorporated into the entrance of the mosque, allowing a continuous sheltered walkway for the public. There are 4 minaret-like towers on the façade, 2 taller ones and 2 shorter ones.

It was also known as Kuchu Palli (meaning “hut mosque” in Tamil – referencing the original hut structure) and Masjid Chulia (“Chulia Mosque”). In 1974, Al-Abrar Mosque was declared a national monument. Major renovations were carried out from 1986 to 1989, turning the single-storey mosque into two storeys. 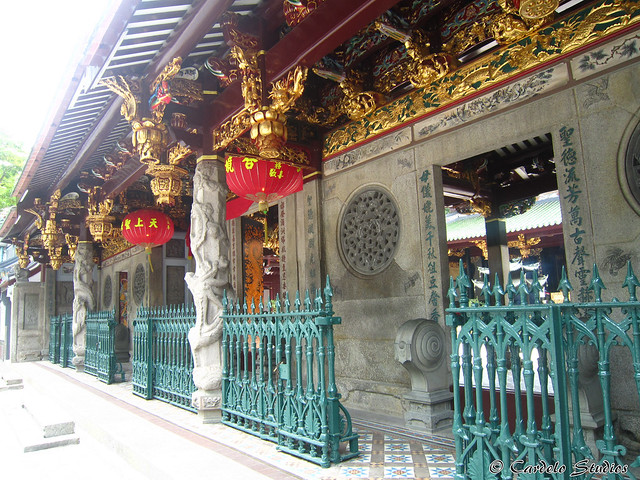 Thian Hock Keng Temple (天福宫) is the oldest Hokkien Temple in Singapore. It began in 1821 as a small prayer house dedicated to Ma Zu (妈祖), the Taoist Goddess of the Sea, for Chinese immigrants to offer their thanksgiving after a safe and successful journey to Singapore. In 1839, a proper temple was constructed, and completed 3 years later. It was funded by donations from devotees, including philanthropist Tan Tock Seng. The temple was constructed from recycled materials from Chinese junks and pottery, and no nails were used. It was designed according to the traditional temple architecture of Southern China – the style adopted by almost all Chinese temples in Singapore. 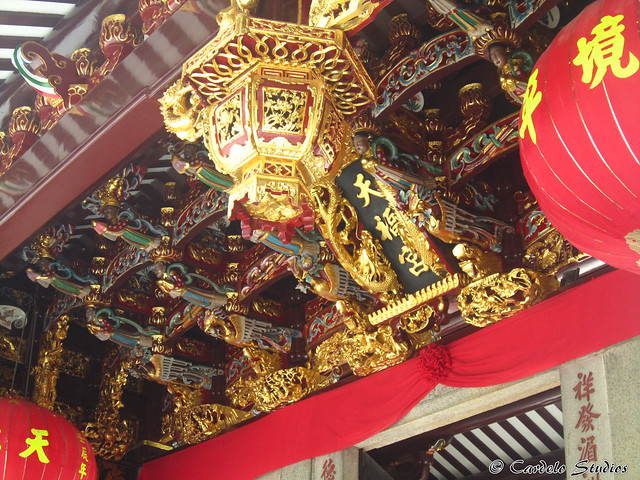 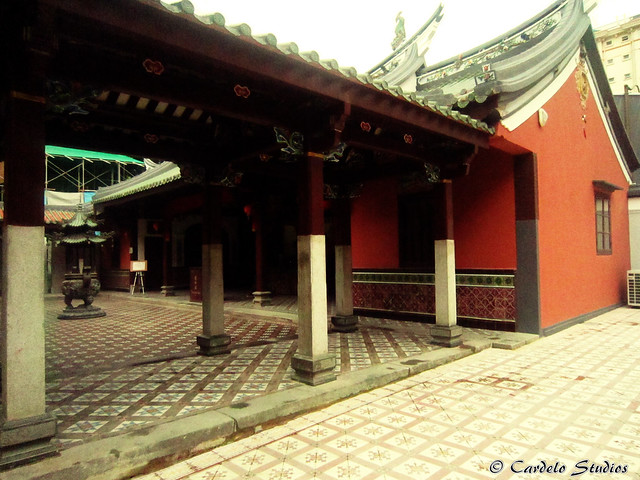 In 1907, the temple received a calligraphic scroll from Emperor Guang Xu of China. The scroll was hung at the main altar until 1998, and was then donated to the Singapore History Museum (now the National Museum of Singapore). 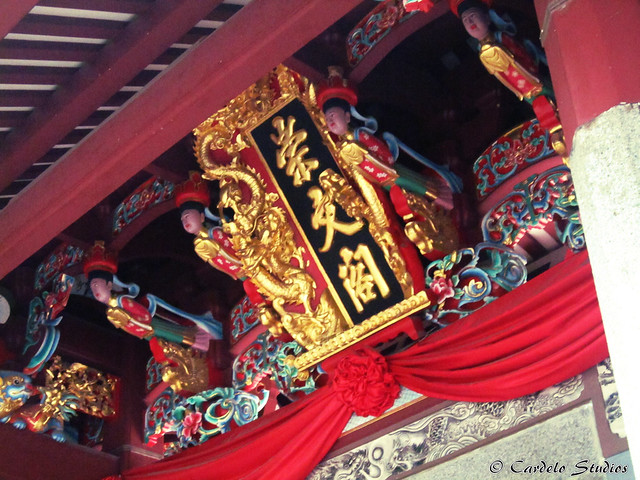 The Chung Wen Pagoda (崇文阁), situated on the right side of the temple, was completed in 1849, and was established by Tan Kim Ching, son of Tan Tock Seng. It housed the earliest Chinese private school in Singapore. The Singapore Hokkien Huay Kuan (福建会馆; “Hokkien Clan Association”), founded in 1840, was also housed in the temple. Tan Tock Seng became its first president. The association moved to its current premise across the road when the new building was completed in the 1950s.

When Chong Hock Girls’ School (崇福学校) was established by the clan association in 1915, it was housed in Chung Wen Pagoda. It began enrolling boys in 1949, and was renamed Chongfu Primary School in 1981. 4 years later, it moved to its current premise in Yishun. 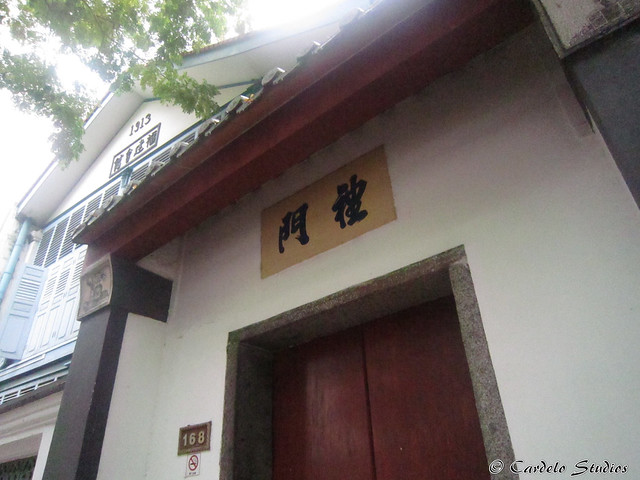 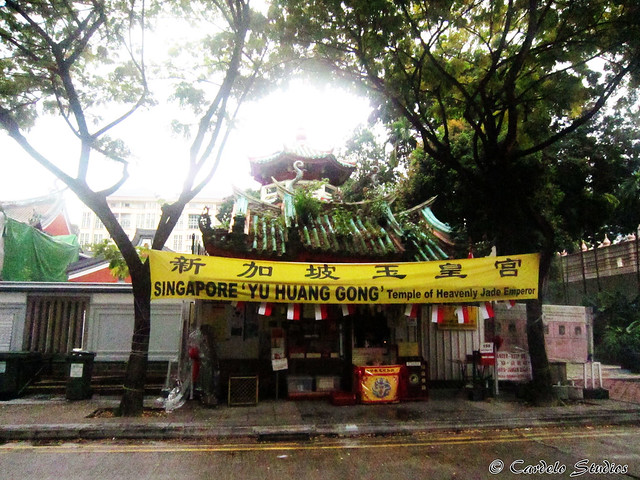 Keng Teck Whay (庆德楼) is located next to Thian Hock Keng, and was established in 1831 by Hokkien Peranakan merchants from Malacca. It was gazetted a national monument in 2009. In 2010, the ownership of the building was transferred to the Taoist Mission and was renamed Singapore Yu Huang Gong – Temple of the Heavenly Jade Emperor (玉皇宫). 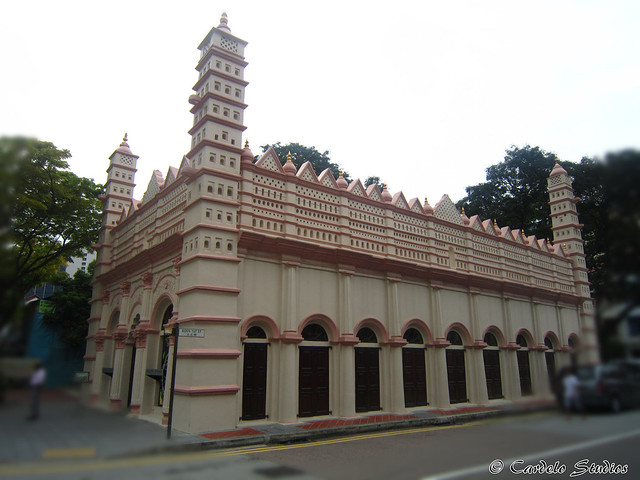 Nagore Durgha is one of the 3 places of worship established by the Chulias in the vicinity (the other two being Al-Abrar Mosque and Jamae Mosque). The shrine was built in 1827-30, and was dedicated to Syed Shahul Hamid Qadir, a 15th century holy man from Nagore, India. It was thus initially known as Shahul Hamid Durgha. 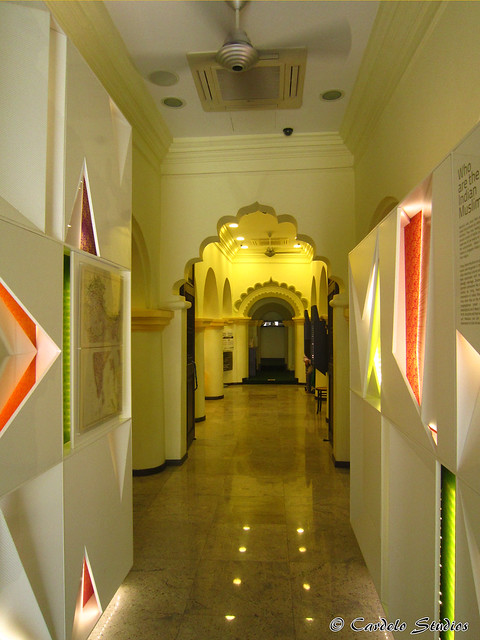 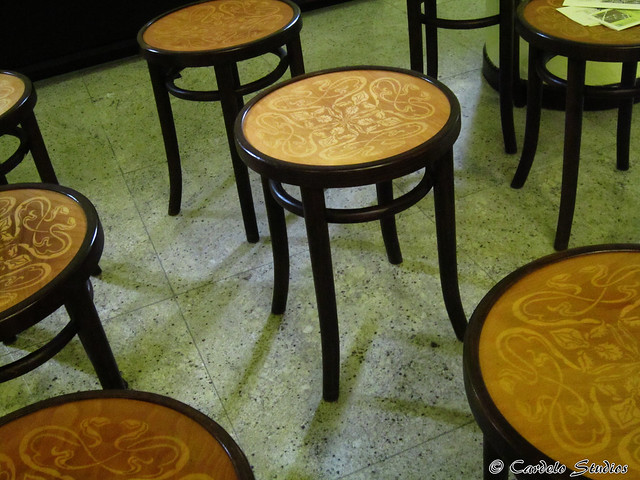 Inside the heritage centre

The brick and plaster building was declared a national monument in 1974, but was closed and boarded up in the 1990s due to structural problems. It was renovated in 2007, and re-opened as the Indian Muslim Heritage Centre in 2011. 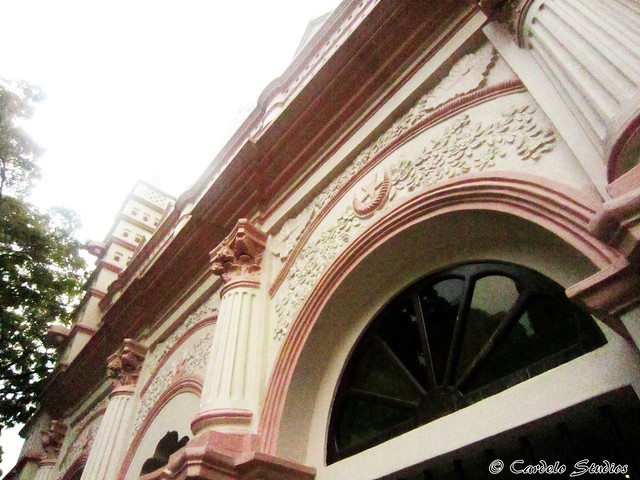 The design of the shrine was based on the original Nagore Durgha shrine in Nagore. Its Chulia-style architecture is an eclectic mix of Western and Islamic features. Minarets topped with onion domes are juxtaposed with Doric columns and Palladian features. A similar shrine of the same name was also established by the Chulia immigrants in Penang. 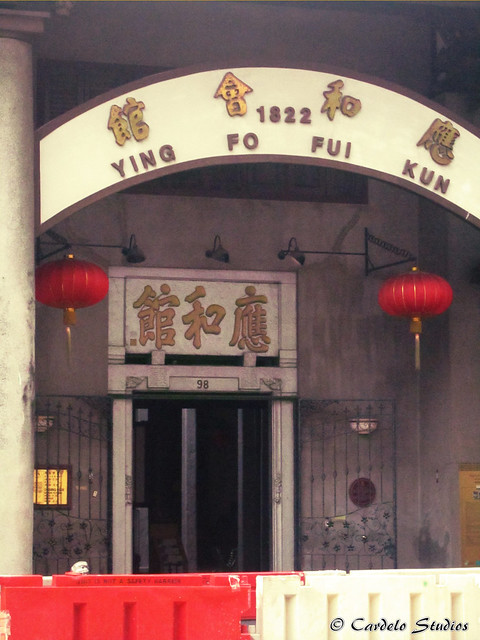 Ying Fo Fui Kun (应和会馆) is a Hakka clan association established in 1822. It originally served as a temple for Hakka immigrants from 5 different counties in Guangdong Province. Its name refers to the peaceful co-existence of the different Hakka groups in the Hokkien-majority district. The temple is dedicated to Guan Gong (关公), the God of War.

The association founded the Ying Sin School (应新学校) in 1906, which was housed in the premises of the association until the school’s closure in 1971.

In 1887, the association bought over a plot of land at the current Commonwealth Lane, and housed their ancestral hall and burial grounds there. It is known as the Shuang Long Shan Wu Shu Ancestral Hall (双龙山五属义祠).

Ying Fo Fui Kun was rebuilt and restored numerous times, and was gazetted a national monument in 1998. 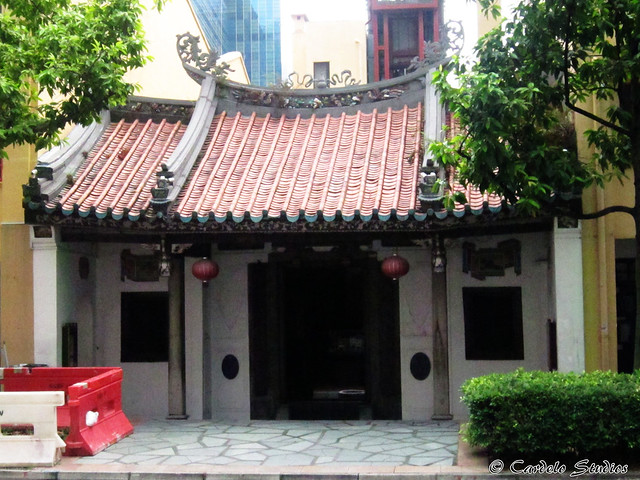 Fuk Tak Chi Temple (福德祠) began as a wooden shrine dedicated to Tua Peh Kong (大伯公) in the early 1820s. A brick temple was built in 1825, and was renovated in 1869. The temple moved to Geylang in 1994 and the dilapidated building was closed. 4 years later, it re-opened as the Fuk Tak Chi Museum, and 2 years later became part of the Far East Square development. 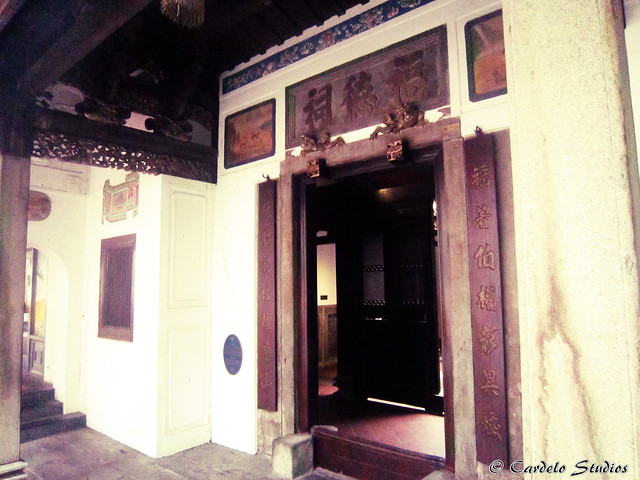 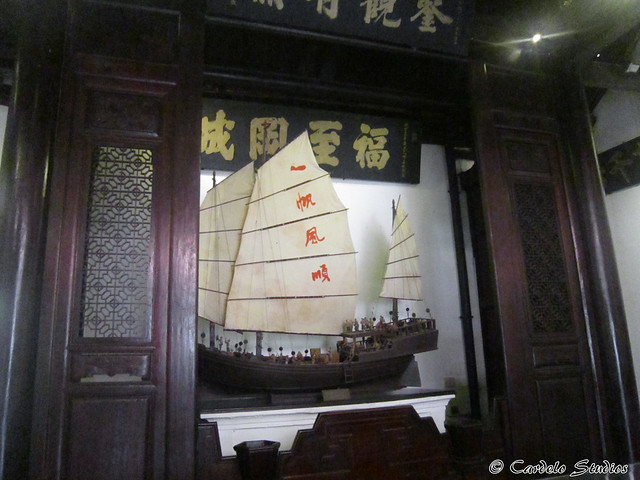 No longer a temple, the altar area now displays a model of the Chinese junk boat that the early immigrants arrived in

Although not a national monument, it is a conservation project under the National Heritage Board, and is hailed as Singapore’s first street museum. 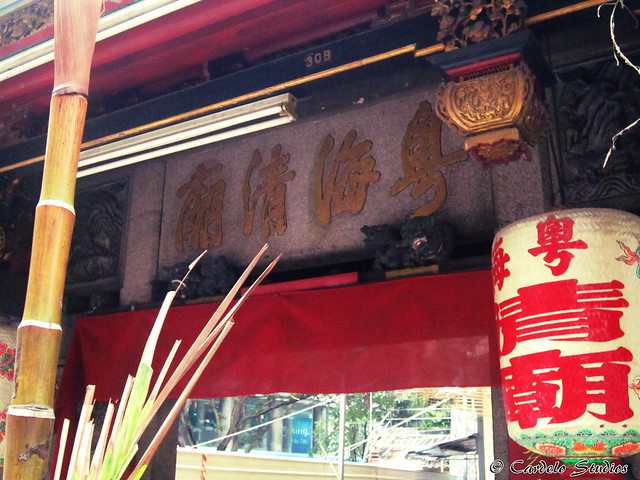 Although not located along Telok Ayer Street, I included this temple in this article due to its shared history with the other places of worships listed above. Yueh Hai Ching Temple (粤海清庙; also known as Wak Hai Cheng Bio in Teochew) was established by the Teochew community in 1826. Similar to Thian Hock Keng Temple, it was a coastal worship place dedicated to Ma Zu. A concrete building was built in 1850-55, and renovations were undertaken in 1895.

In 1907, Yueh Hai Chin Temple and Thian Hock Keng Temple became the only 2 temples in Singapore to receive an imperial scroll from the Emperor of China.

The temple features a spacious forecourt and two shrines – one dedicated to Ma Zu and another dedicated to Xuan Tian Shang Di, the Heavenly Emperor. There are also sculptural reliefs depicting scenes from Chinese Opera. It is owned by the Ngee Ann Kongsi, and was gazetted a national monument in 1996.

When I visited the temple, it was undergoing restoration works. A temporary shrine was erected at the forecourt while the main buildings were restored.

This entry was posted in Streets and tagged Found. Bookmark the permalink.

One response to “Telok Ayer Street”