As a follow up to my first post about Duchess Estate/Margaret Drive, I revisited the place recently, after most of the demolition took place. The first post was updated with new photos, while the places in Duchess Estate that I missed out will be covered here. 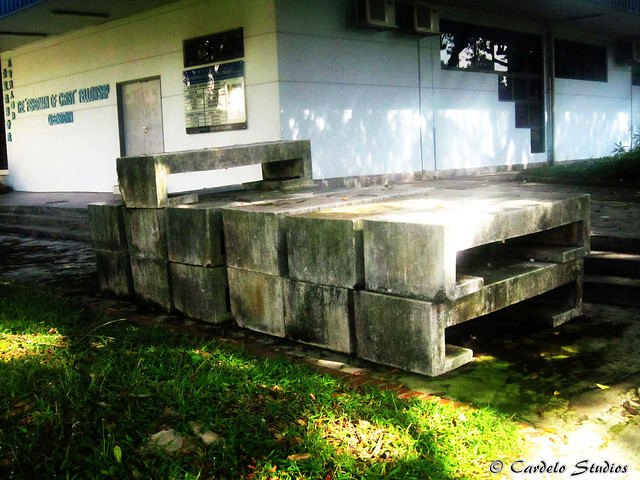 These benches used to be placed all over the estate; now they are piled in front of the church 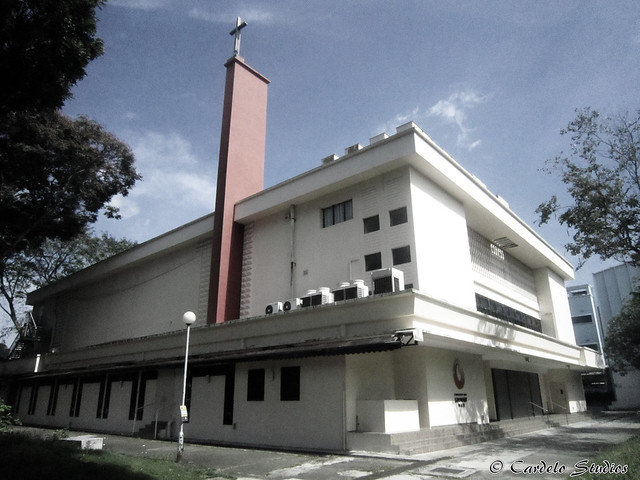 On the left, where the cross is, was where the name of the theatre was displayed – “Venus” and “金都”; billboards were placed on the façade on the right

These 2 theatres were originally planned by SIT to be located at Dundee Road. However, when HDB took over, the plans were changed to locate them closer to the neighbourhood centre. They specialised in Taiwanese movies and kungfu flicks. Neighbouring school would also hold their graduation ceremonies in the theatres. 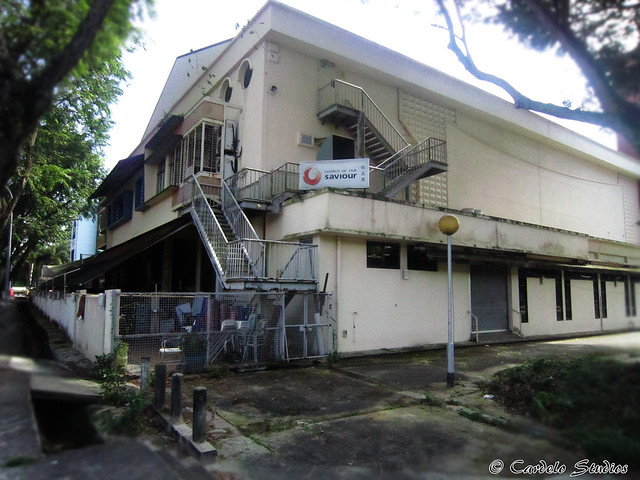 However, business dwindled within less than 20 years, and they were closed in 1984. The 2 buildings are now occupied by the Church of Our Saviour and The Fisherman of Christ Fellowship respectively. 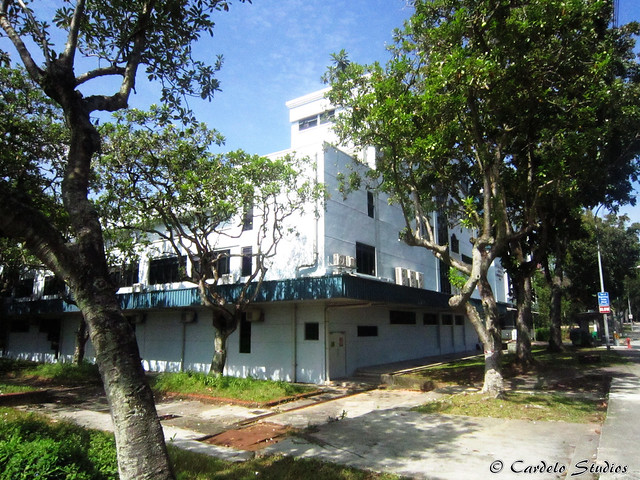 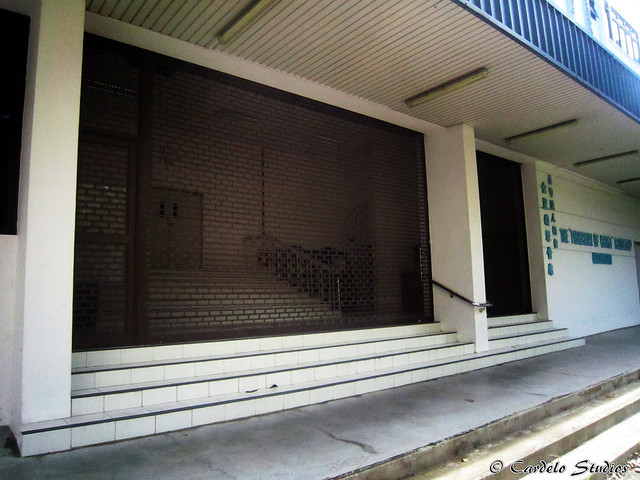 The former box office and entrance

The two bolded lines read: “the theatres at my old house were built in the 1960s”; “the old theatres were converted into churches.” Dr Liang lived in Queenstown for 23 years when he was young, and these 2 lines in the song refer to Venus and Golden City Theatres. 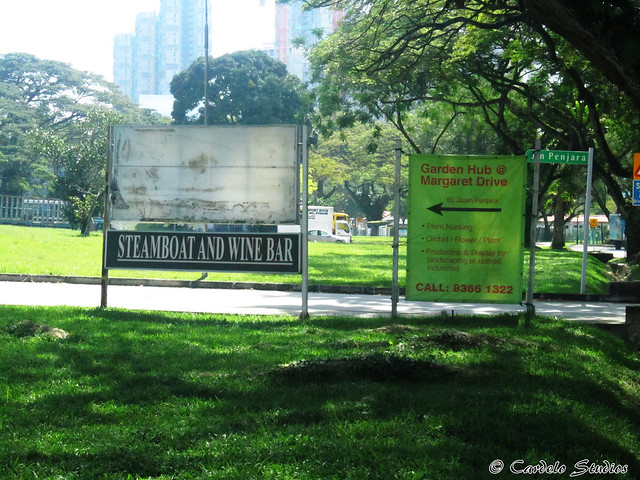 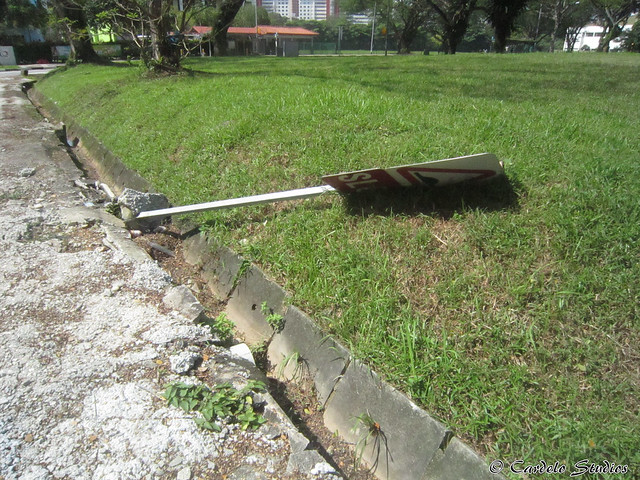 The area bounded by Jalan Penjara used to a cluster of flats – Blk 15 to Blk 25 (while Blk 7 to Blk 14 were located around the polyclinic and library). There are now 2 stretches of Jalan Penjara. The curved stretch that leads to the Queenstown Remand Prison was the first stretch to be constructed, while the straighter stretch that leads to Garden Hub @ Margaret Drive (originally the HDB nursery; subsequently known as Queens Townclub) was added on later. 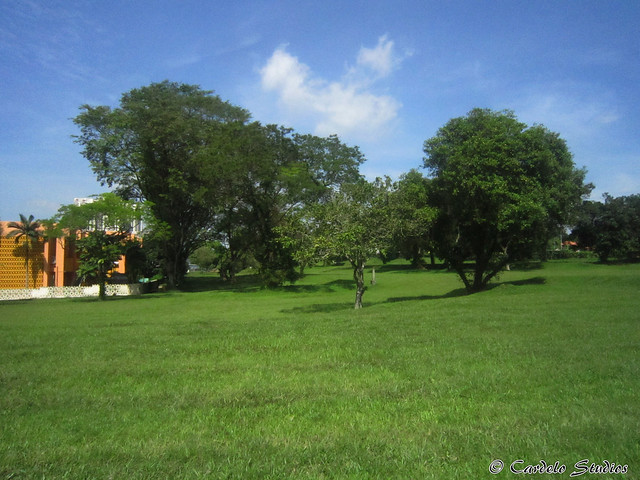 There used to be a car park behind the library, together with Blk 11 and Blk 12

Penjara means “prison” in Malay, hence the road name might be referring to the Remand Prison that used to be along the road. 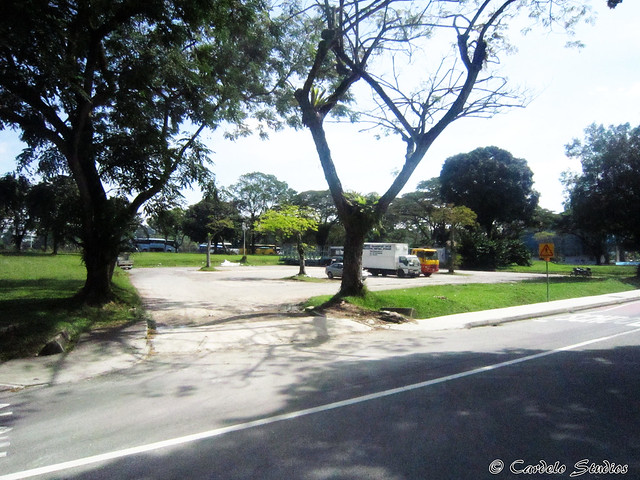 The car park is most likely the original one from the estate. It was surrounded by Blks 21 to 24

All the flats have been demolished for quite some time. 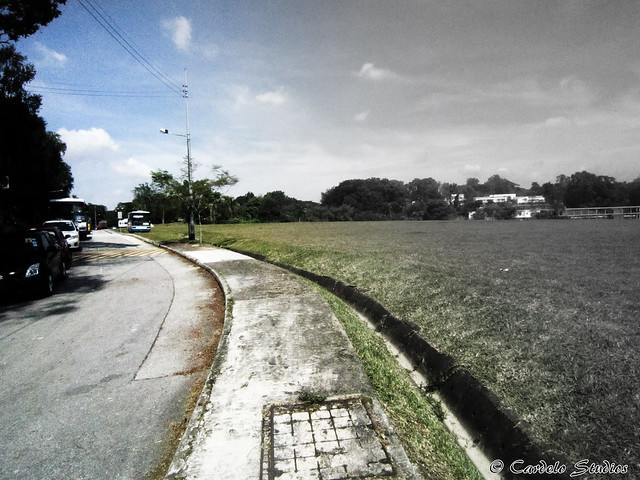 The Queenstown Remand Prison was built to ease overcrowding problems at Outram Prison. During its service, it housed several famous inmates, including Michael Fay, opposition leader Dr Chee Soon Juan and celebrity Christopher Lee. It was torn down in 2010. 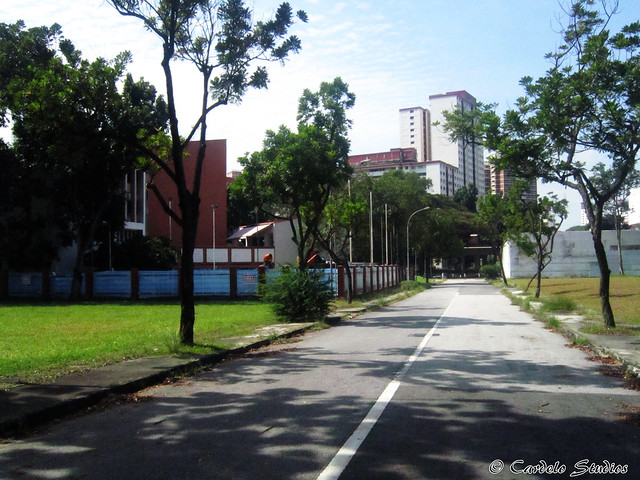 The Queenstown CC was originally located at Margaret Drive, before merging with Alexandra CC and moving over to its current location at Commonwealth Avenue. The old building was last occupied by the New Optometry and Ocular Care Centre (NOOCC), before being demolished at the end of 2012. 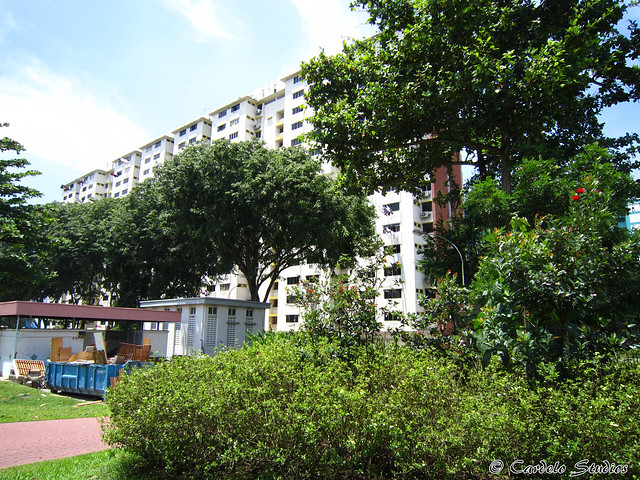 Blk 27A is the sole block of flats that used to stand next to Queenstown MRT Station. It was selected for SERS together with Blk 6C Margaret Drive and Blk 39A Commonwealth Ave. These 3 were the last surviving blocks of flats in the entire area. 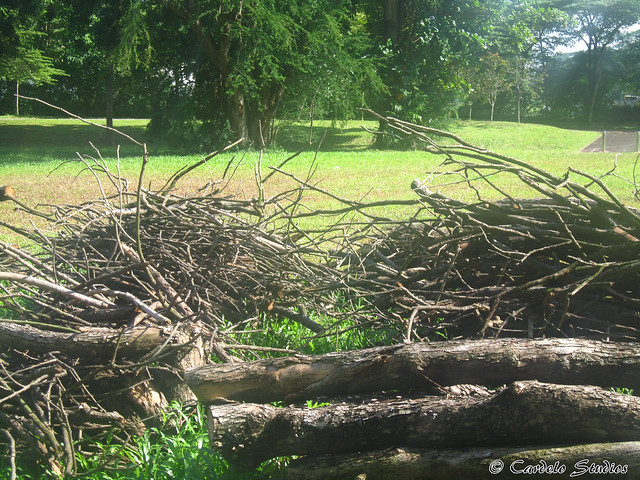 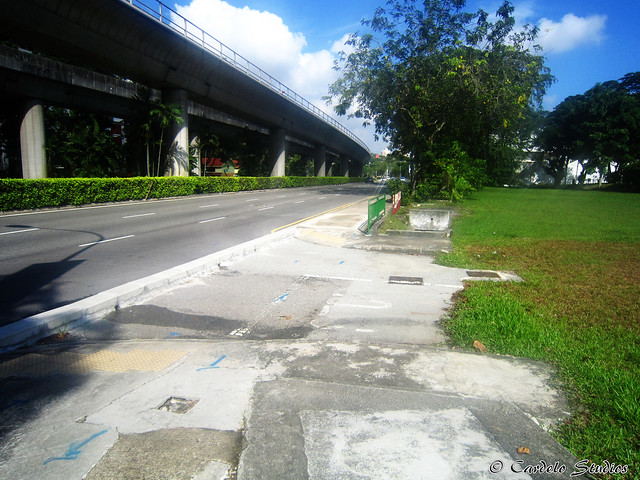 After demolition, the once well-shaded stretch of road is exposed to the scorching sun

The residents from these 3 blocks were relocated to the new cluster of flats at the junction of Dawson Road and Strathmore Ave, next to Queenstown Secondary School. 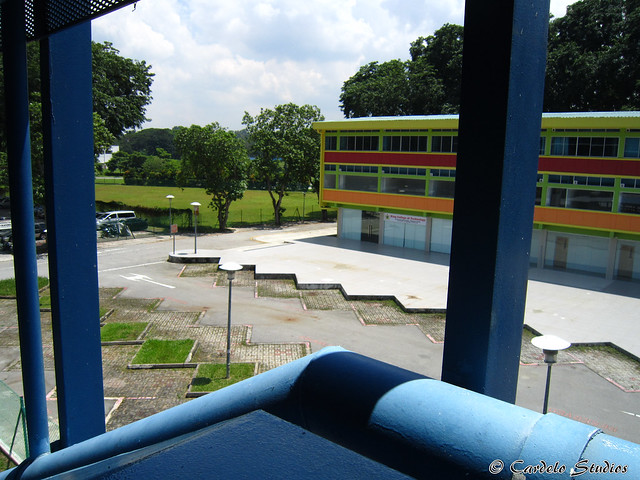 The Queenstown Driving Centre was the second driving centre in Singapore, after the one at Maxwell Road. It was larger than the one at Maxwell, and was able to hold Class 1 and Class 2 vehicles. The “L” plate cars would be parked along Commonwealth Ave, in front of Blk 27A.

In 1997, the driving centre was closed, and Queenstown Neighbourhood Police Centre took over the building. In 2005, the police centre moved to Alexandra Road, within the premises of HQ 1st CD Division, and the building was subsequently leased out as private offices. 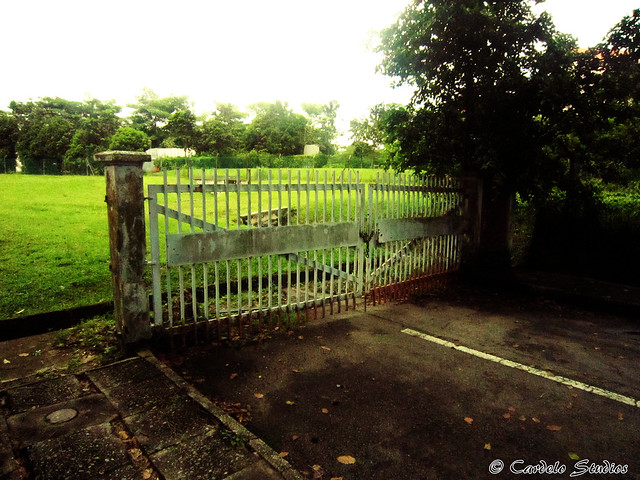 At the end of Dundee Road once stood Setron Building. I don’t actually remember much about it, even though it seems to be demolished only in recent years. Currently, only the entrance gate remains. 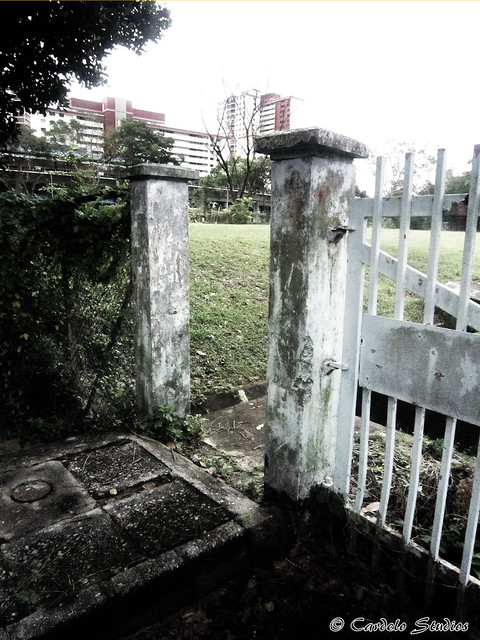 Now an empty plot of land 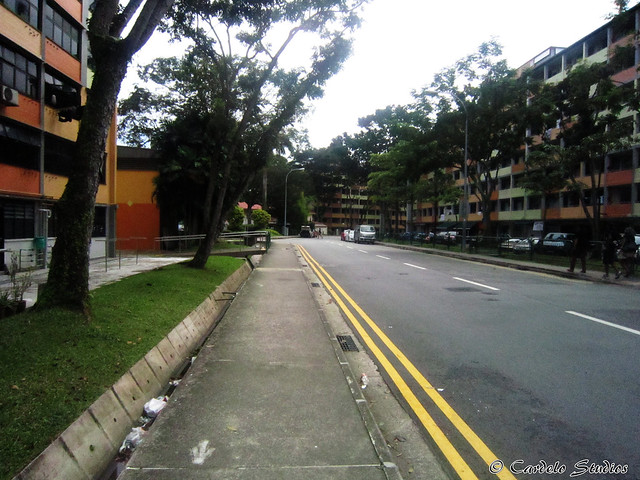 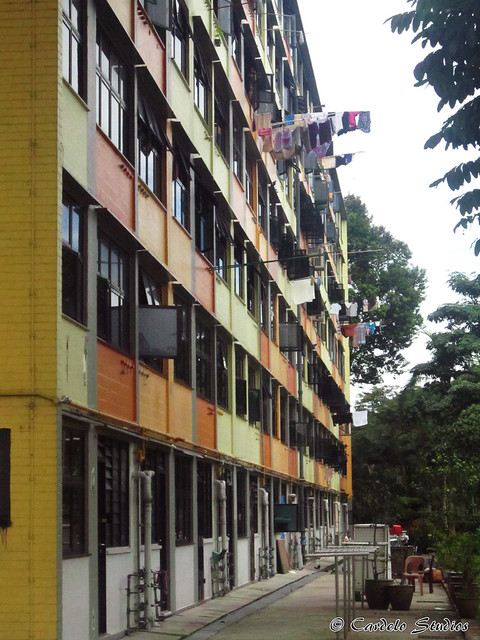 When SIT was dissolved in 1959, the terrace houses in this cluster were just completed, while the high rise flats (Blks 45, 48 & 49) were built halfway. HDB then took over and completed these 3 blocks. Hence, these 3 blocks can be considered the first HDB flats in Singapore. 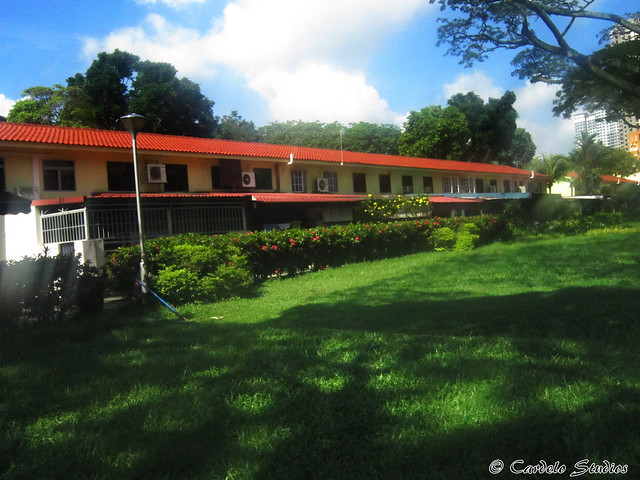 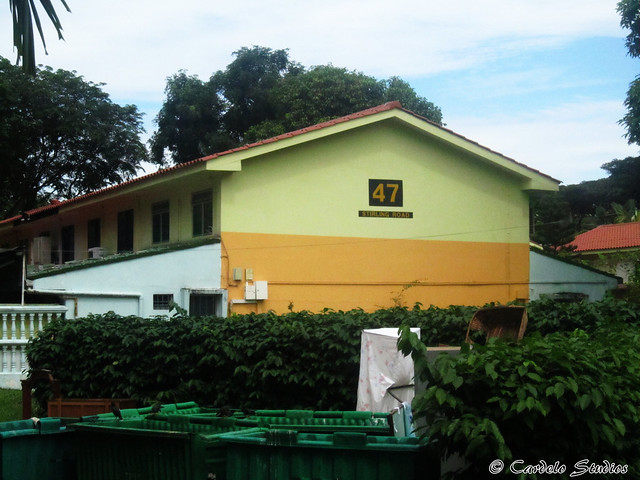 Today, the 3 blocks are mainly rented out to poorer residents, while the terrace houses have been rising in popularity as they are some of the only remaining HDB terrace houses left. 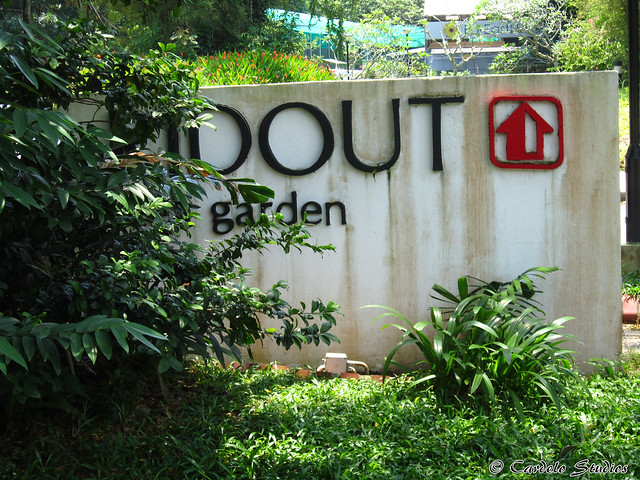 Ridout Tea Garden and the nearby Ridout Road were named after Major-General Sir D. H. Ridout, the highest-ranking military officer in the Straits Settlement during WWI. The Japanese style garden was constructed by HDB as part of the landscaping features in the satellite town. In 1978, a major fire broke out in the row of shops. The fire fighters ran out of water despite the heavy downpour, and had to use water from the pond to put out the fire. 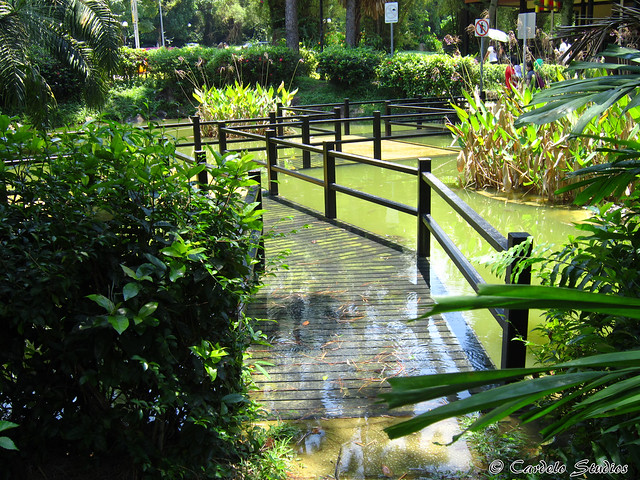 The garden features a pond with a footbridge. Turtles can be found in the pond 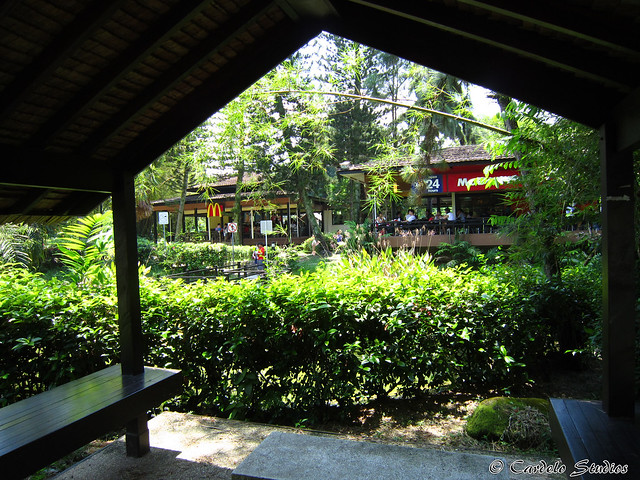 Today, a 24 hour McDonald’s restaurant stands in the garden, and is a favourite haunt among residents and students from adjacent schools.

The following map shows all the buildings demolished in the area around Margaret Drive, including those mentioned in this post and the previous, and others not highlighted. From Blk 1 to 40 (Blk 41 continues at Stirling Road), only Blk 38 remains today.

This entry was posted in Housing Estates and tagged Found, Lost. Bookmark the permalink.