This is a continuation of the previous post on Fort Canning. 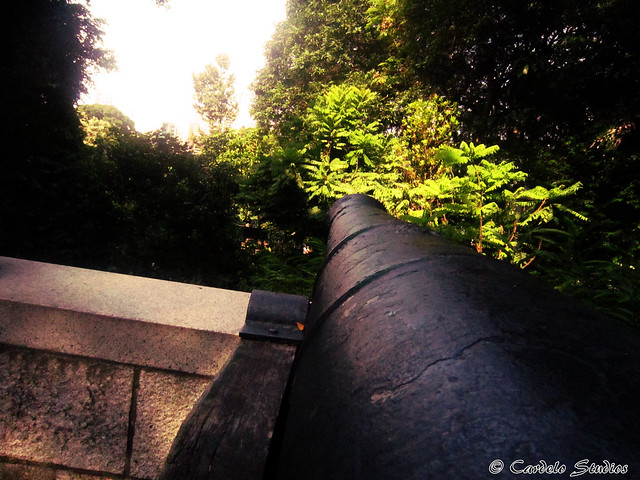 The next site along the 19th Century Trail is the pair of 9-pound cannons, which was part of a series of artillery installed in Fort Canning. However, they were never used in combat. Instead, the cannon was fired 3 times a day to announce the time at 5 am, 1pm and 9pm. It was also used as an alarm system for town fires. The fort was demolished in 1907. 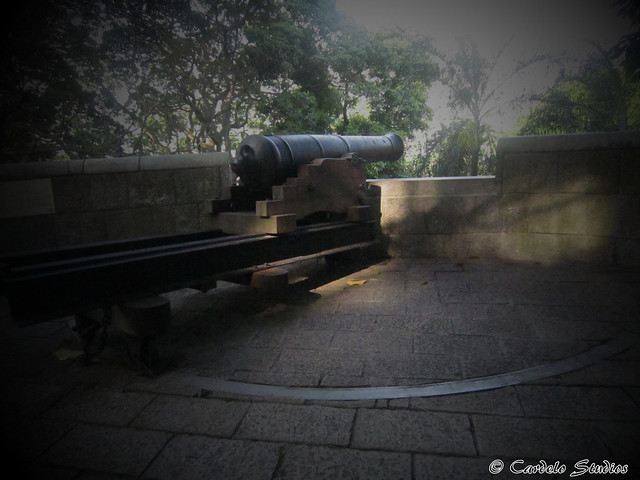 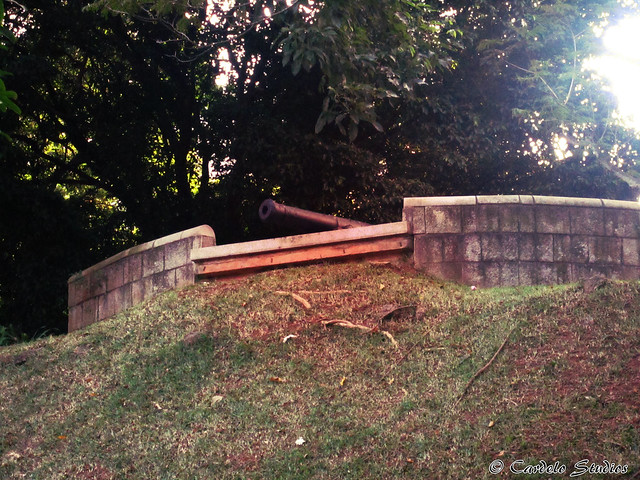 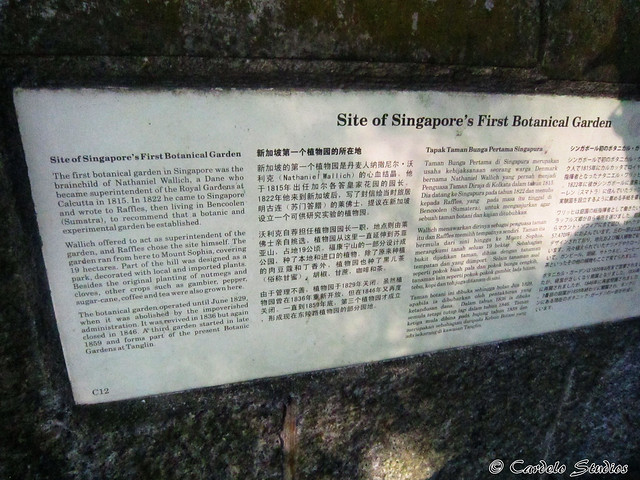 The place marker indicating the location of the Botanical Garden

Singapore’s first Bonatical Garden was established in 1822, and was spearheaded by Nathaniel Wallich, superintendent of the garden. It extended from this part of Fort Canning to Mount Sophia, and was planted with important and valuabe spices such as nutmeg and clove. The garden closed down in 1829 due to insufficient funds from the administration. It was revived from 1836 to 1846, and a third garden was established in 1859 near the current Botanic Gardens. The Spice Gardens in the current Botanic Gardens is a replica of the first Botanical Garden. 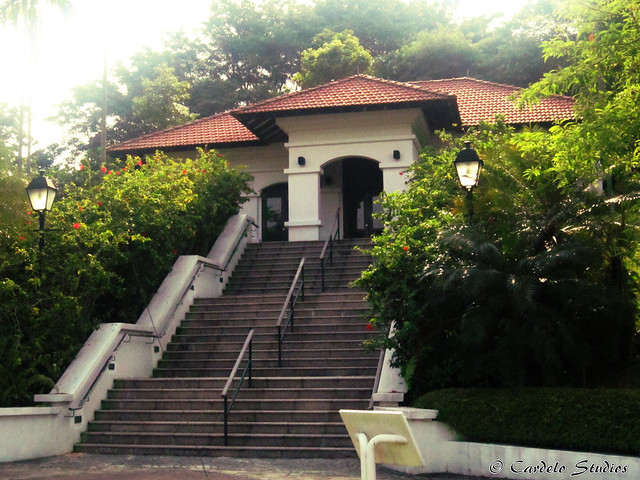 This building is labelled “Raffles House”. Is it a replica?

The residence for Sir Stamford Raffles, a wood and thatch structure known as Raffles House, was set up in 1822. It was then enlarged by subsequent Residents. It had a clear view of the settlement around Singapore River, and was featured in numerous paintings of the area. It was subsequently known as Government House. 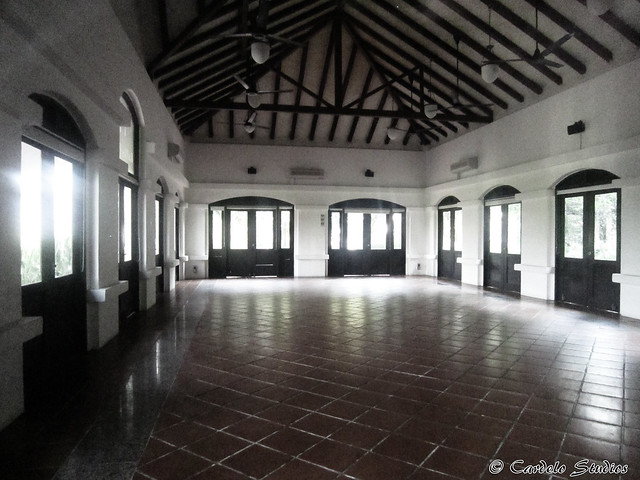 A peek into the Raffles House

There are two place markers over here, one labelled “Raffles House” and another labelled “Government House”. But from what I know, both names refer to the same building, which was demolished in 1859 to make way for the Fort. 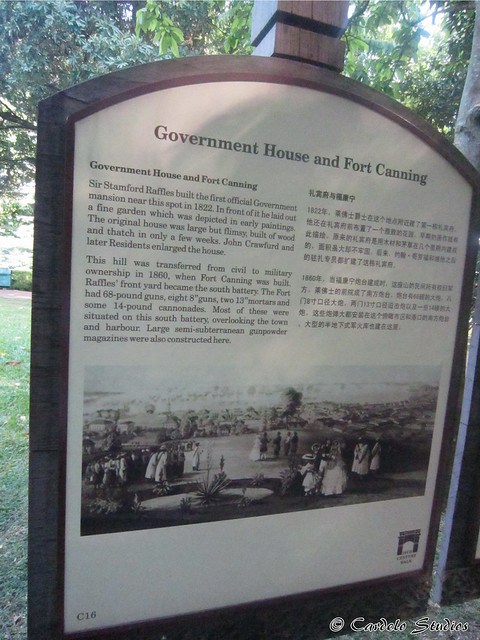 Place marker for the Government House

The current building located at this site, I believe, is a modern replica of the original building.

In front of the Raffles House replica is Raffles Terrace, where 3 other replicas now stand. 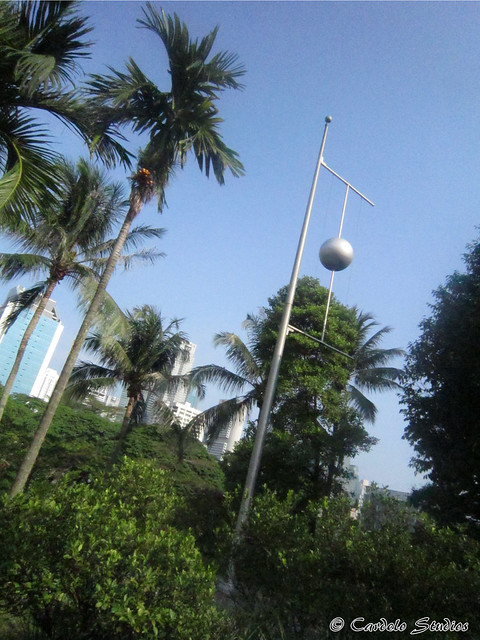 A replica of the time ball

The Time Ball was originally erected on Fort Canning to keep time. It would be raised at 12:55pm daily, and then dropped at 1pm. This allowed everyone living in the vicinity to synchronise their clocks and watches with the time announced by the Time Ball. 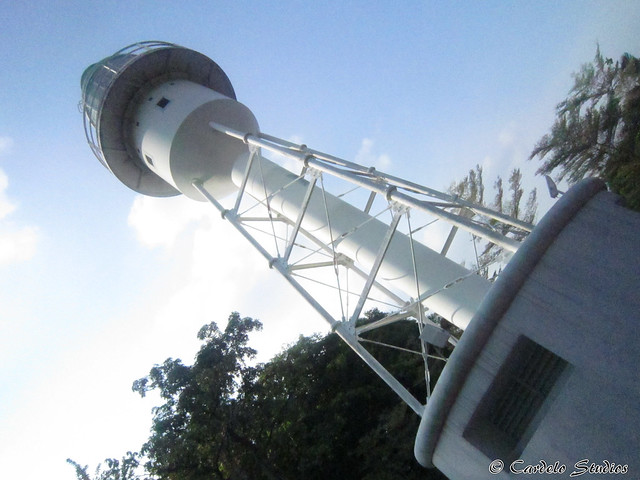 Before land reclamation took place, Fort Canning Hill was quite near the shoreline and was very visible from the sea. A lighthouse is thus necessary to guide ships into the harbour along Singapore River. Since 1855, a lantern would be hung at the top of the flagstaff, until a lighthouse was built in 1902. A 24.3m structure standing on top of a 36.3m hill, the lighthouse had a total elevation of 60.6m, allowing it to be visible from 30km away. The lighthouse ceased operations in 1958 when high-rise buildings in the vicinity blocked it from view. It was replaced by an electric-powered light on top of the Fullerton Building, but that light has ceased operation since 1979. 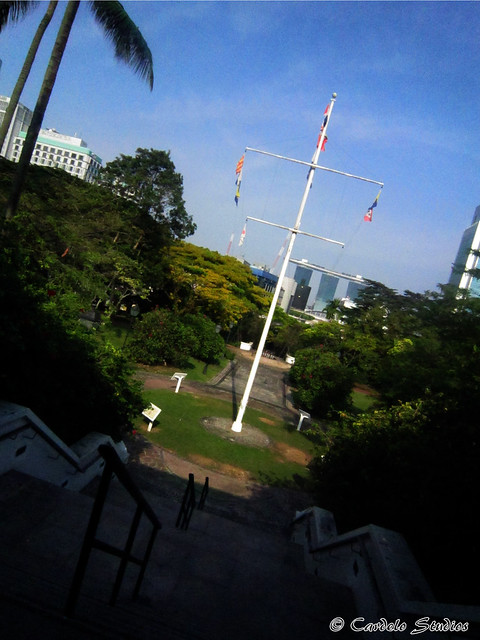 A replica of the flagstaff

The original flagstaff was a wooden structure, and was erected in 1825. It was subsequently replaced by a steel flagstaff, which was then removed by the Japanese in 1943 during their occupation of Singapore. After WWII, the British erected yet another flagstaff, which was also removed when the microwave tower was built. The flagstaff provided numerous signals and information, such as the arrival of ships and the conditions on the ships (such as the presence of gunpowder or the outbreak of smallpox on board).

Replicas of all 3 structures can now be seen at Raffles Terrace. 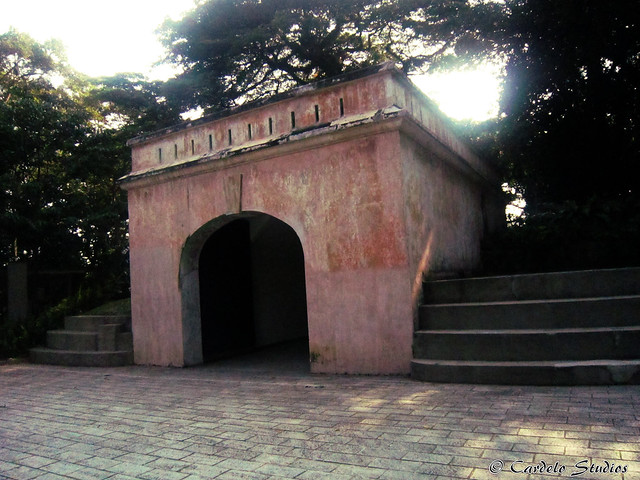 In 1859, a decision was made to convert the hill into a Fort. It was completed in 1861, and included a strong wall that surrounded the summit of the hill. A moat also ran around the wall. Today, the moat has completely disappeared, together with most of the Fort Wall. Only the Fort Gate and a fragment of the wall remain today. Visitors can climb up the narrow staircase to the top of the Gate. 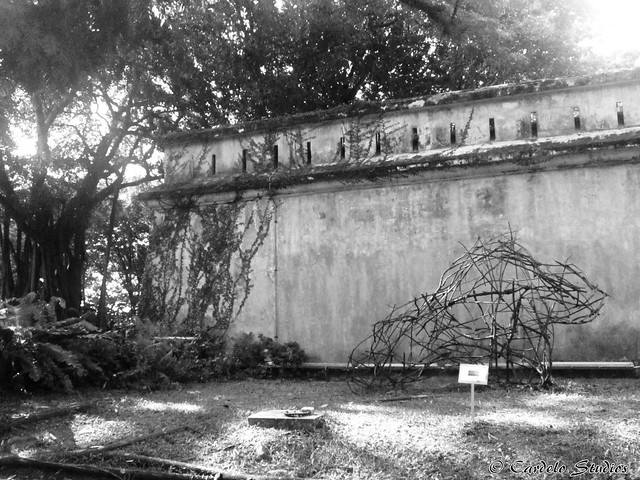 What is left of the fort wall

The building that now houses The Legends Fort Canning Park and Hotel Fort Canning used to be the headquarters for the Far East Command and the office of Lt-General Percival. It gained conservation status together with Fort Canning Centre in 2005. 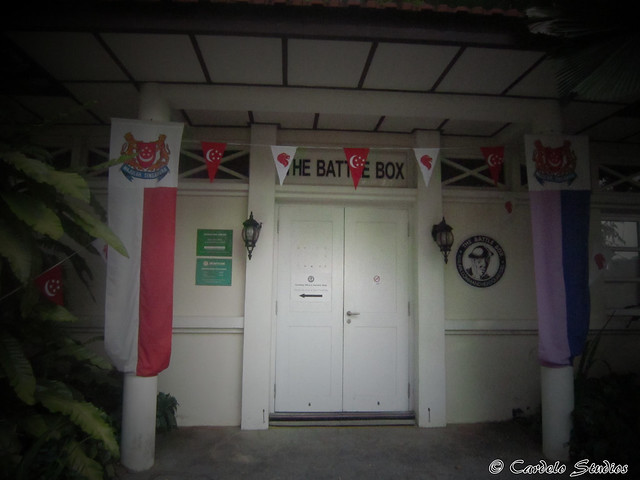 Entrance to the Battle Box

The 9m deep complex was constructed to serve as an emergency bunker and bomb shelter for the Combined Operations Headquarters. In 1941, Lt- General Percival ordered the construction of a newer and large headquarters in Sime Road. Days before the fall of Singapore in 1942, the Sime Road complex was abandoned and the headquarters shifted back to Fort Canning. The decision to surrender to the Japanese was made in the “Commander, Anti-Aircraft Defence Room” in the underground complex. 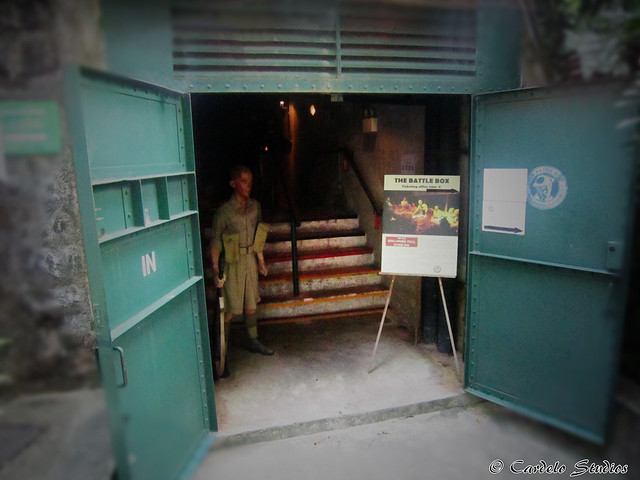 During the Japanese Occuation, it was used for communication. After the war, the British took control of the place again, and Fort Canning was handed over to the Singapore Armed Forces following Singapore’s independence. However, the Battle Box fell into disuse and was sealed in the late 1960s and its exact location forgotten. In 1988, a journalist, who was in search of an underground bunker complex that he has read about, maganed to find the Battle Box.

The Battle Box was converted into a museum, which was opened in 1997. 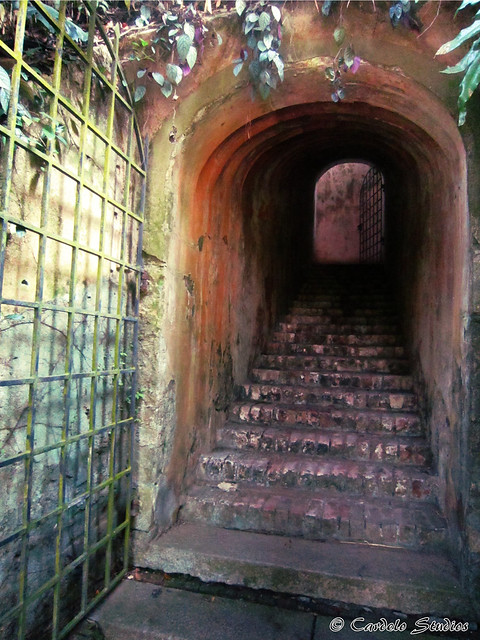 Sally ports were constructed to allow military personnel to enter or exit the fort undetected. “Sally” refers to the act of a sudden exit, usually by the defencers of the fort against attacking enemies. There were at least 3 sally ports at Fort Canning, but only one remained. The other two, one located at the northwestern side of the hill and another near Hill Street, could not be found.

In addition to the historic sites along the two trails, there are also a few other places of interest located at the foot of the hill. 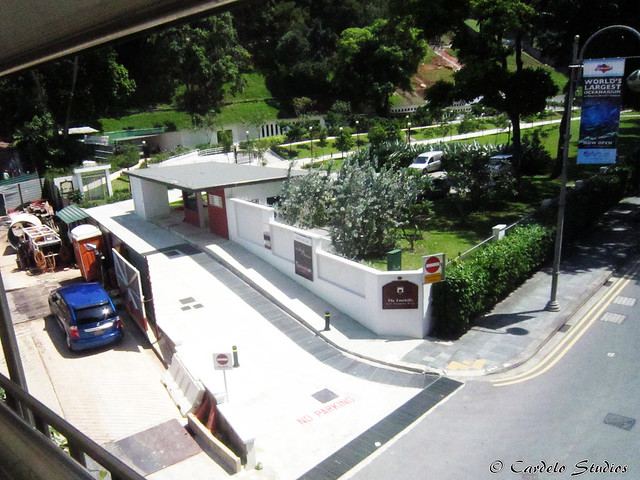 River Valley Swimming Complex stands at the original site of King George V’s Park, located at the foot of Fort Canning Hill along River Valley Road. It was initiated by the Singapore City Council, which was building various sports facilities for the public around Singapore. The National Sports Promotion Board and the Singapore Sports Council took over the management of the complex upon their establishment in 1971 and 1973 respectively. As there were few residential areas in the vicinity, the complex was severely under-utilised, and was finally closed in 2003.

The original canteen of the swimming complex is currently occupied by Viridian Art House. The pool has been demolished, but remnants of the original complex can still be seen, such as the entrance gates, the mosaic floor tiles, the stone walls and the toilet signs. 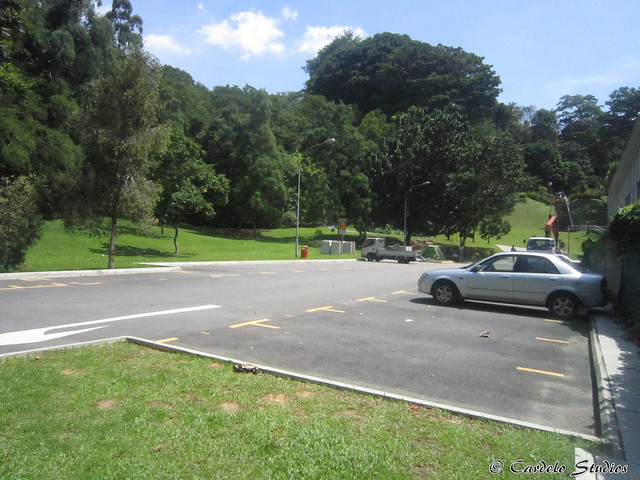 Approximately where the National Theatre & Van Kleef Aquarium once stood

At the foot of Fort Canning Hill once stood two other landmarks – the National Theatre and the Van Kleef Aquarium. Before they were built, railway tracks from the nearby Tank Road Station used to stand on this plot of land.

Plans for a National Theatre were first announced in 1959 by then Minister for Culture S. Rajaratnam. Local architect Alfred Wong emerged as the winner in a design competition to design the theatre. It was opened in 1963 to commemorate the self-governance of Singapore.

The theatre was sheltered by a 150 tonne cantilevered steel roof. Its front façade featured 5 triangular points as a reference to the 5 stars of the national flag, while the fountain in front represented the crescent moon. There were no other walls on the other facades, allowing for natural ventilation. Numerous events, such as National Day Rallies and Miss Singapore competitions were held at the theatre.

In the early 1980s, defects were found on the cantilevered roof, deeming it structurally unstable. It closed down in 1984 and was demolished 2 years later. The National Theatre Trust, which was housed in the theatre, relocated to Kallang Theatre, which was opened the same year.

Next to the National Theatre was the Van Kleef Aquarium. It was named after Karl Willem Benjamin Van Kleef, a Dutch businessman who donated his wealth to the Municipal Government after this death to beautify the city. Numerous proposals on how to use the money were raised, such as a garden, a zoo or a circus. The committee finally settled on an aquarium in 1933, which was deemed as both popular and profitable. Construction of the aquarium, however, was postponed due to war, and was finally completed in 1955.

The aquarium housed thousands of marine creatres, and reached its peak in the 1970s. The number of visitors, however, declined in the 1980s, and the aquarium underwent renovations from 1986 to 1987 in a failed attempt to boost visitor numbers. With the opening of the Underwater World in Sentosa in 1991, popularity of the Van Kleef Aquarium reached its bottom, and it was closed the same year. It was then demolished 5 years later.

Due to their proximity, the National Theatre and Van Kleef Aquarium were commonly featured together in photographs.