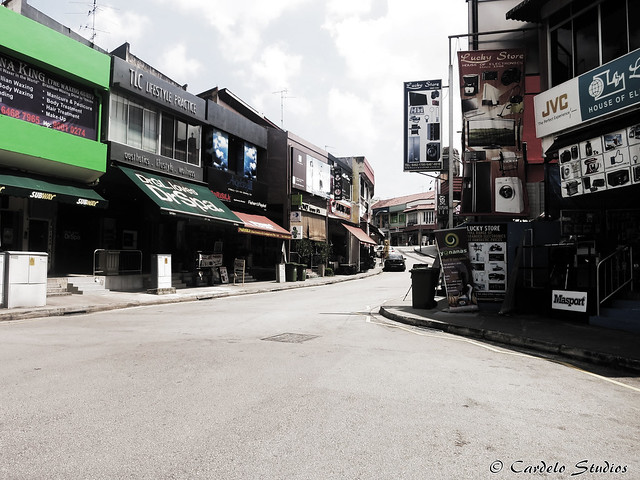 Mention Holland Village, and the first things that come to people’s minds are “good food”, “expatriates”, “windmill” and “the place that had its own drama serial back in 2003”. This post will look into the lesser known aspects of this unique part of Queenstown. 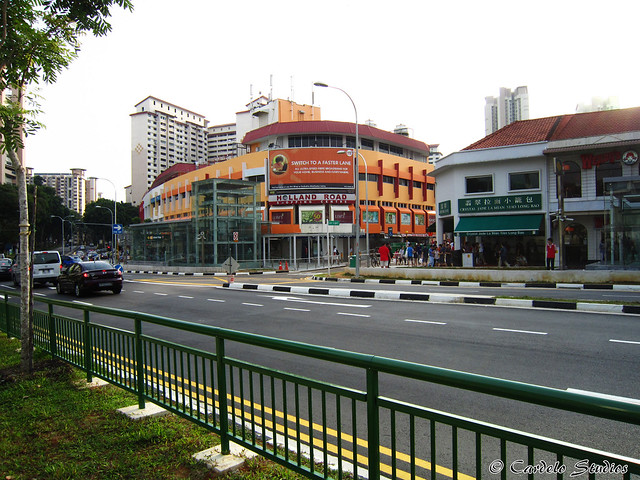 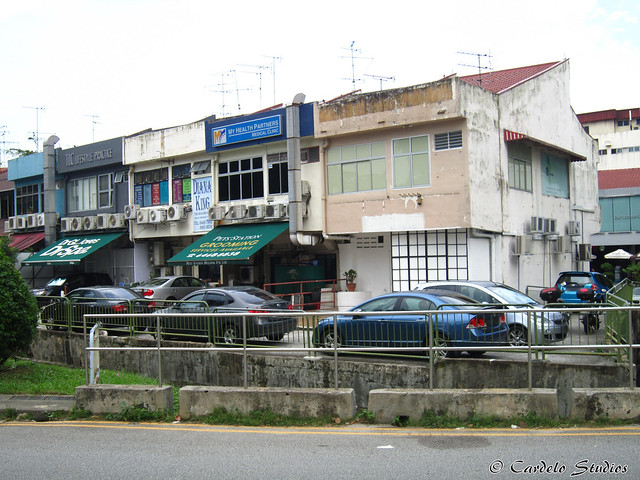 Like many other parts of Singapore, this area was originally a kampong, complete with its own farms. Located near the prime residential areas of Orchard Road and Tanglin, Holland Village quickly became an expatriate centre, attracting the nearby European population. The area was subsequently redeveloped into semi-detached and terrace houses for the British military (Chip Bee Gardens today) and shophouses (the core Holland Village as we know it today). It was developed as part of the Buona Vista District of Queenstown. 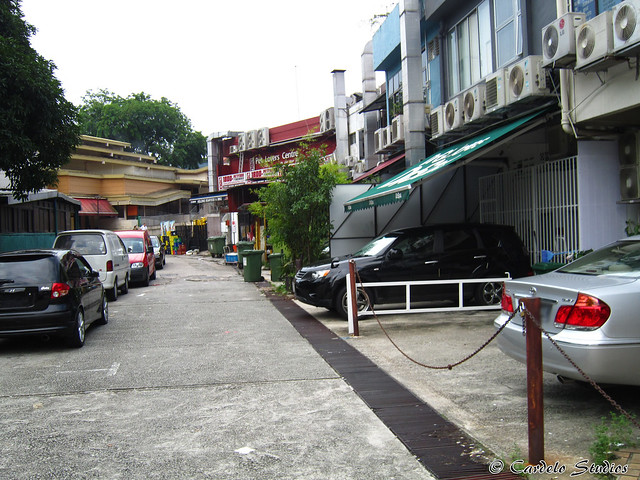 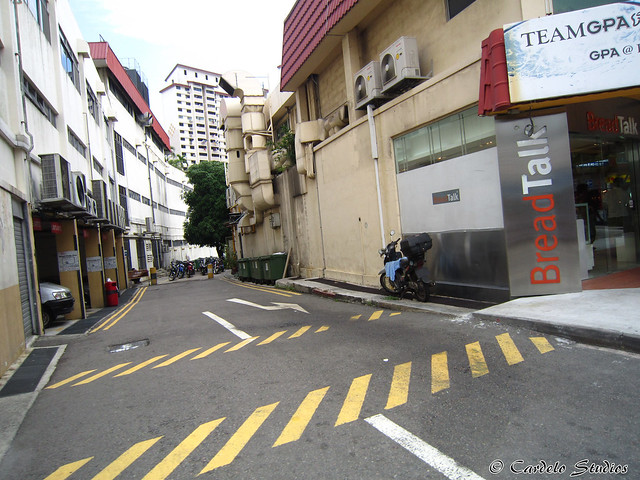 Two roads run through Holland Village – namely Lorong Mambong and Lorong Liput. Mambong means “apex” while liput means “to cover” in Malay. It is unclear why the two roads were named so, but they have been labelled as such since they first appeared in street directories in 1966. 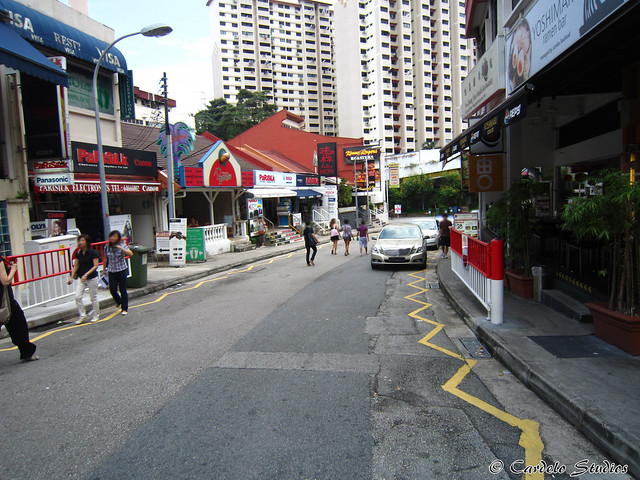 Parts of these 2 roads are barricaded at night as an anti-terrorism measure. This effectively turns the area into a pedestrian heaven at night. 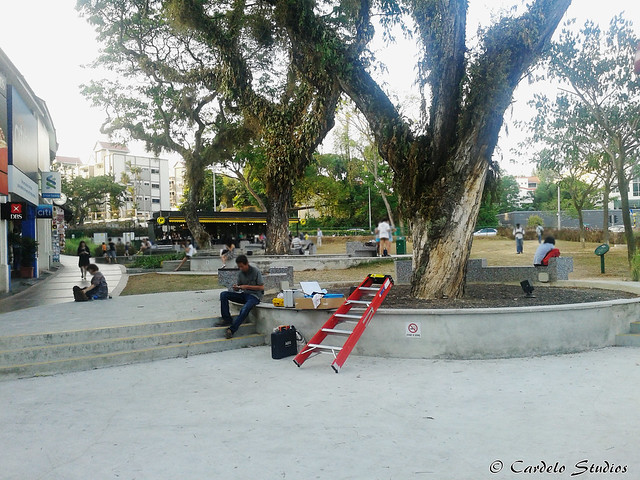 This area near the junction of Holland Avenue and Holland Road used to be a carpark. It was closed for the MRT construction, and is now refurbished as a park 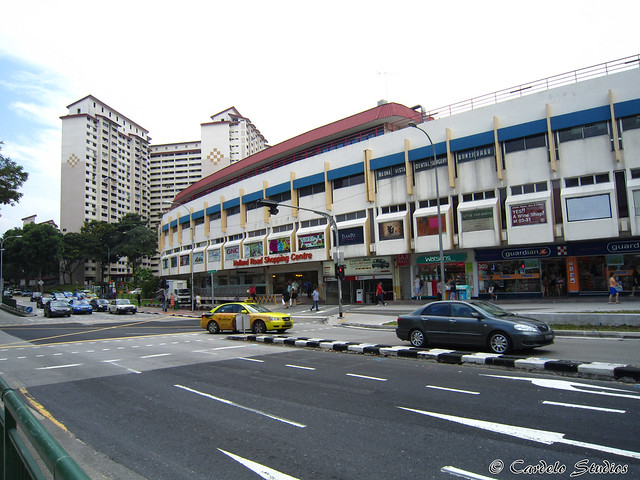 This 42-year old shopping centre is unlike the shopping centres that we know today. There is no atrium space nor central courtyard. Its ground floor shops open directly outwards to the five-footway. Its sole escalator brings visitors up to the second level, after which they have to leave by the staircase. Its anchor tenant, Cold Storage, now operates 24 hours. 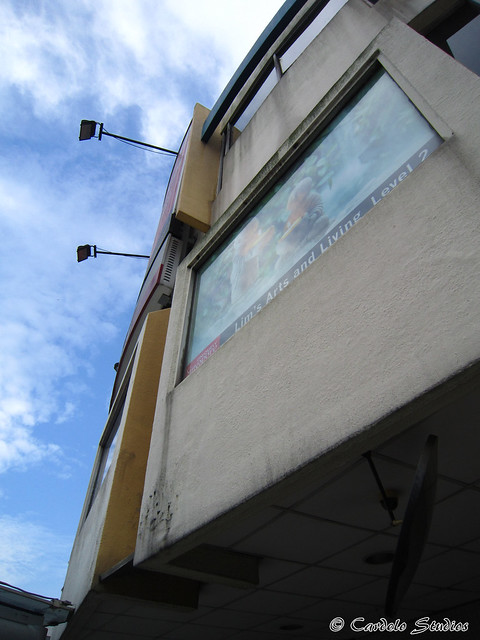 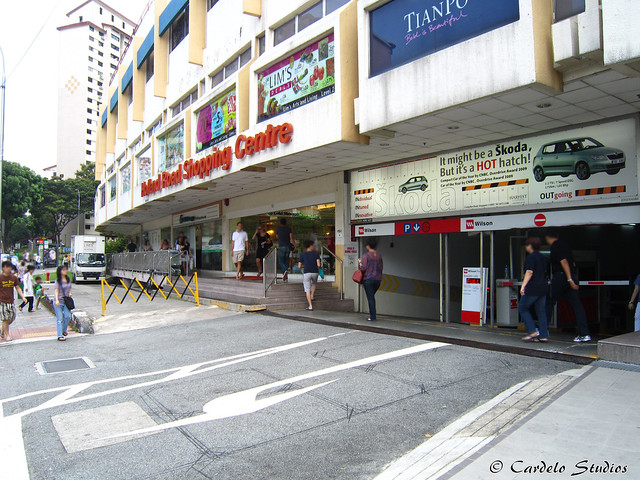 Another anchor tenant that used to reside in the shopping centre was Emporium, otherwise known as ying bao liang (英保良) in Chinese. It occupied the large corner units of level 2. I cannot remember exactly when it closed down, though it should be either the late 1990s or early 2000s. Today, Lim’s Arts & Living occupies the old units of Emporium, together with a few other adjacent units. 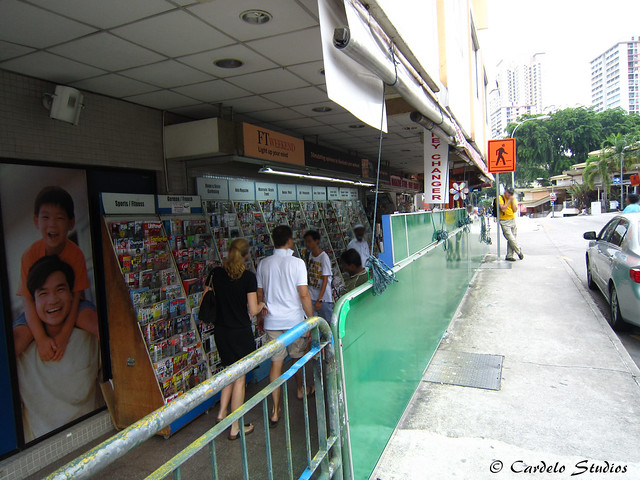 In the 2000s, two magazine stores marked the entrance to Holland Village. Mama Joe Magazine Corner was located on the ground floor of Holland Road Shopping Centre, along Lorong Liput facing Crystal Jade Kitchen. Next to Crystal Jade was Thambi Magazine Store, a much smaller kiosk opened in 1996. Thambi was opened by Mr Mr Periathambi G., known affectionally among the residents as Mr Thambi. When Mama Joe closed down due to bankruptcy in 2007, Thambi took over its space. It preserved the original layout of Mama Joe, placing magazine racks on both sides of the walkway. In 2013, Mr Thambi passed away, and the magazine store is now run by his children. 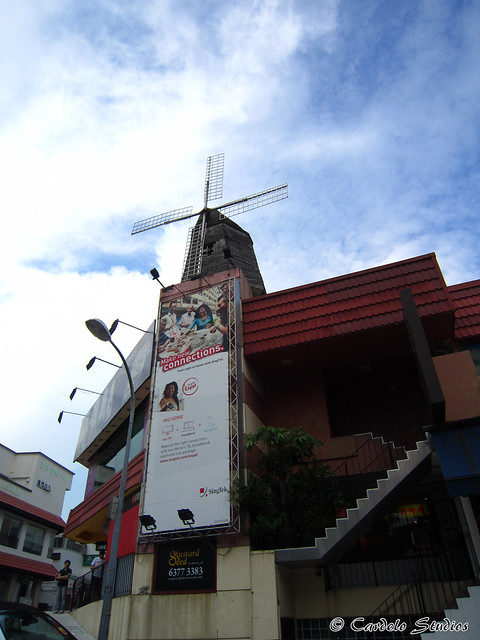 The iconic “windmill” that runs on electricity rather than generate electricity

Today, the 2-storey mall, together with its “windmill”, is considered the landmark of this area. It is meant to be a reference to the name of the place, although as we have already established, the naming of Holland Village/Road has nothing to do with the Netherlands. Another interesting point to note is that this windmill is actually quite a (relatively) recent addition.

The mall has closed down since 2015, and will probably be demolished soon to make way for future developments.

Before the mall was built, it was a more humble-looking commercial block, not unlike its current neighbours. Even before that, an open-air theatre stood in its place. Operated by Eng Wah Theatre, it was demolished in 1985. 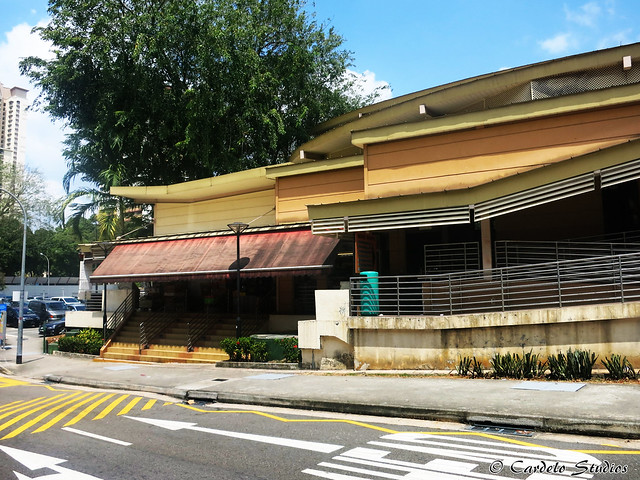 The market and food centre was rebuit in 2005. The current building dones a metallic shell roof, and boasts a timber-decked alfresco dining area. This is in contrast to the older market, housed under a corrugated zinc roof. Over the years, it has served both the HDB residents around the Buona Vista district, and also the landed property residents at Chip Bee Gardens. 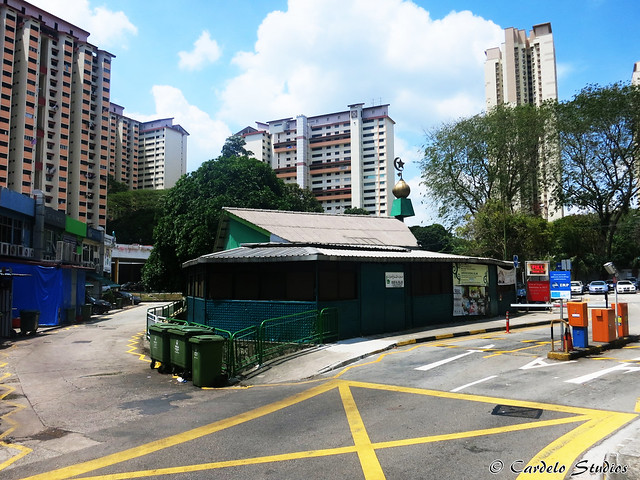 Next to the market stands the Kampong Holland Mosque, which has served the local Muslim community for the past 40 years. The green-coloured mosque is only slightly bigger than a five-room flat, but every Friday, almost 500 congregants would arrive for Friday prayers. The mosque had been on a temporary licence since 1991, and was eventually closed in April 2014. The congregants now visit the nearby Mujahidin Mosque at Stirling Road. 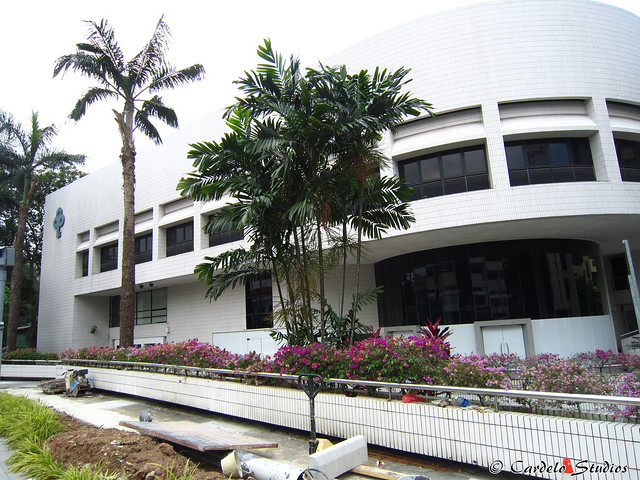 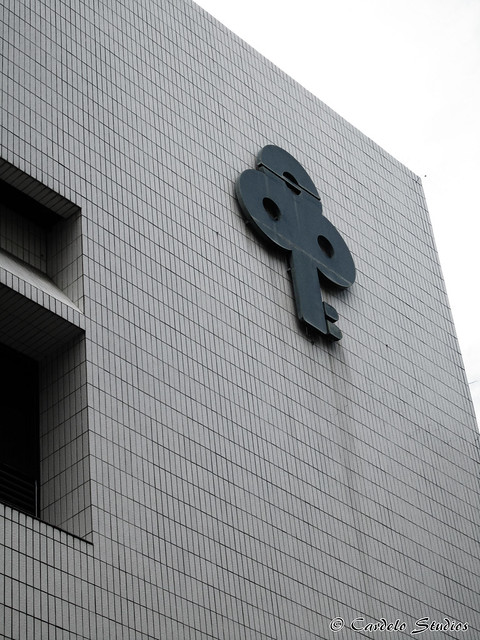 On the other side of Holland Avenue, Taman Warna Post Office was officially opened in 1968 by Mr Lee Teck Him, MP for Ulu Pandan. It was Singapore’s 43rd post office to be opened. However, it was only opened for 9 years, before being replaced by the new post office at Ghim Moh. The building was then renovated, and subsequently functioned as a branch office for the Post Office Savings Bank (POSB). Located at the junction of Holland Avenue and Taman Warna, the building was an entrance marker for Chip Bee Gardens. 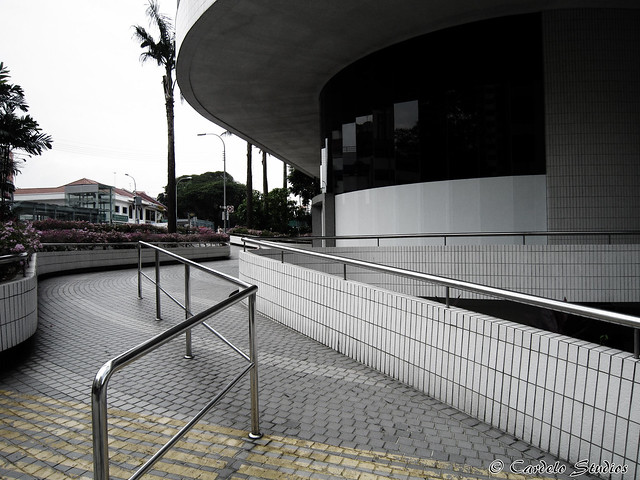 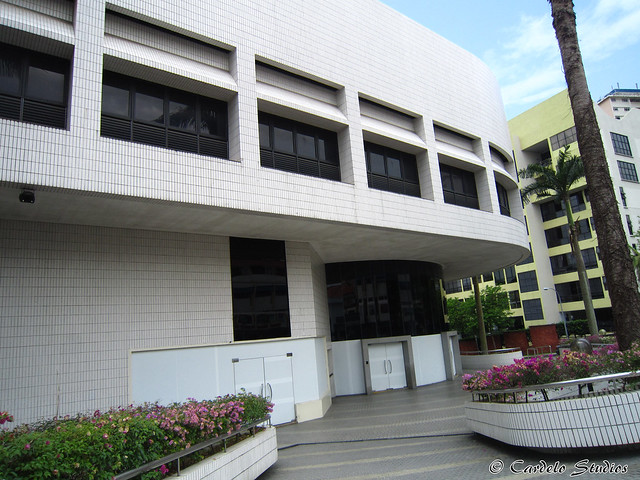 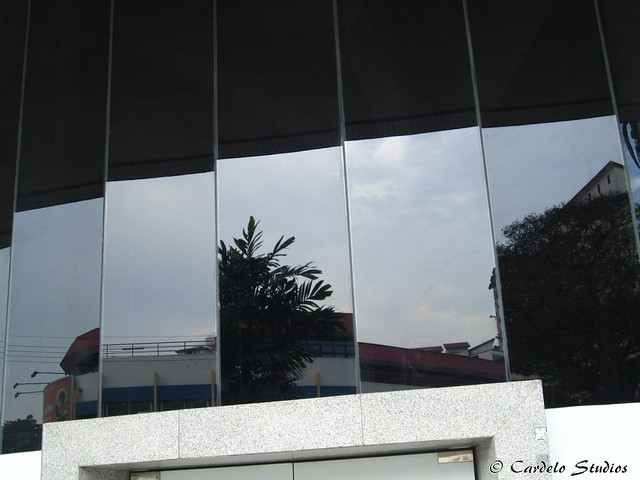 The bank was eventually closed in the late 2000s. Raffles Medical Group then bought over the property in 2013, and plans to build a 5-storey mall that includes medical facilities and a DBS branch. 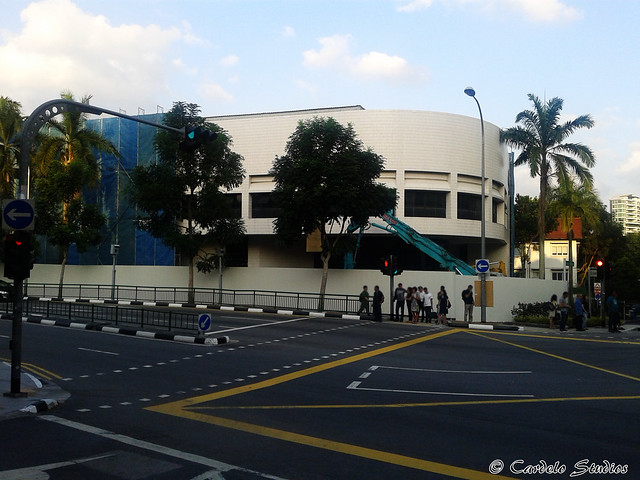 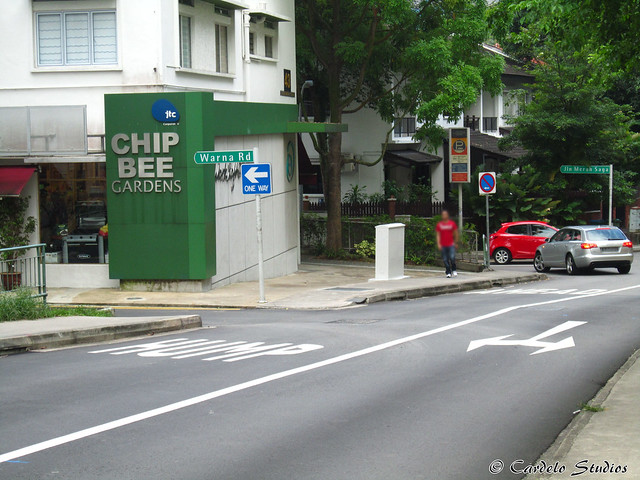 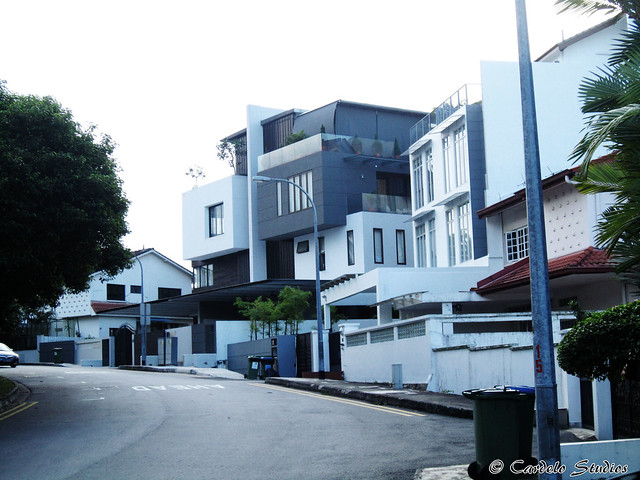 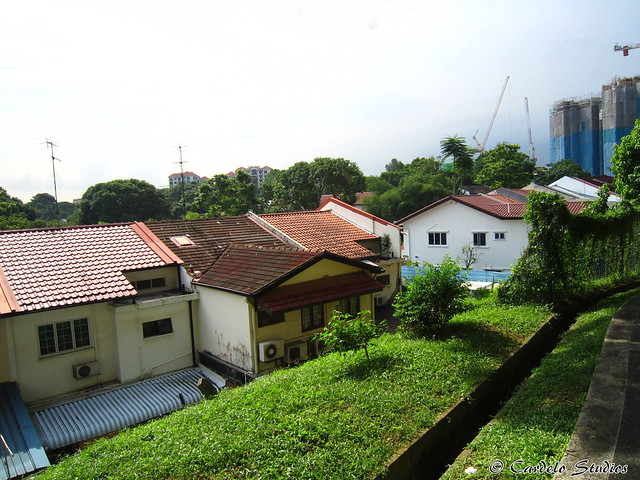 Soon after independence, the village was torn down and replaced by semi-detached and terrace houses for the British military. Today, these houses are occupied by locals and expatriates, while the shophouses closer to Holland Avenue (behind the old post office) now house a variety of cafés and restaurants. There was also a high-rise private housing located between Jalan Merah Saga and Jalan Rumia. In 1995, it was replaced by the Merasaga condominium. 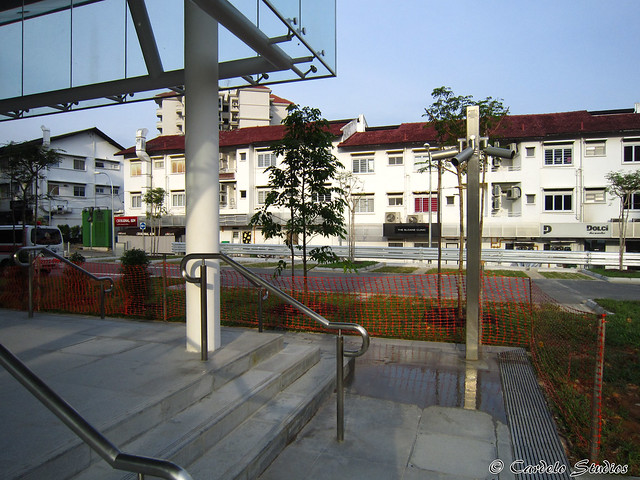 The row of shophouses along Jalan Merah Saga 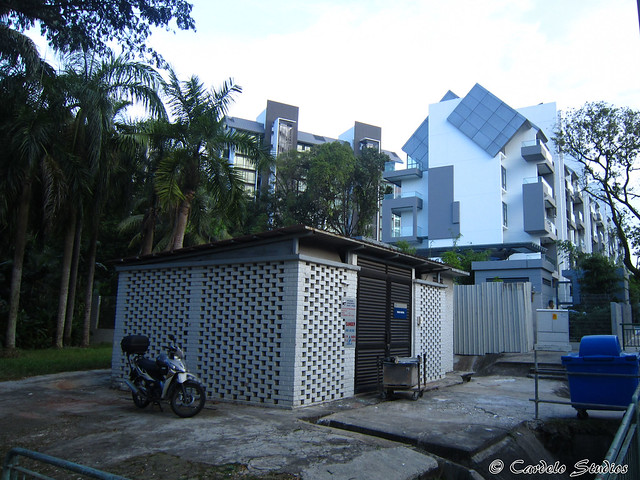 Taman Warna, the name of the main road that cuts through Chip Bee Gardens, means “Garden of Colour” in Malay. As such, all the other roads built have Malay names related to colours as well. Jalan Kuning literally means “yellow road”, while Jalan Kelabu Asap refers to the colour of smoke (kelabu means “grey” while asap means “smoke”). Jalan Puteh Jerneh adopted the old spelling of putih jernih, which means “clear white”, while Jalan Merah Saga may be referring to the red (merah) colour of saga seeds. Jalan Hitam Manis means “black sweet”, which apparently is the term darker-skinned people from Eastern Indonesia used to describe themselves. Jalan Rumia is named after the buah remia, a fruit with a purple seed. There is also a Warna Road, which basically just means “Road of Colour”. 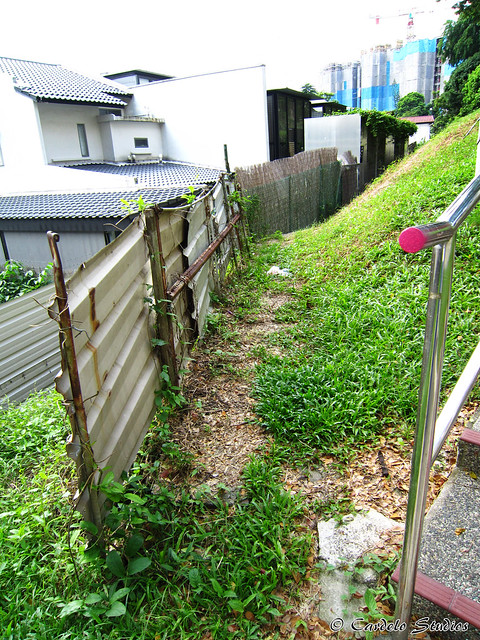 From the flats at Commonweath Crescent, there is a narrow pathway that leads to the back of the terrace houses along Jalan Hitam Manis. There is, however, no direct connection to the rest of Chip Bee Gardens. In the past, Buona Vista Secondary School used to serve as a shortcut.

Keok Ming School was founded in 1935 by a group of philanthropists, and served the residents of gor kok jio village. When it first started, classes were held on the stage of a temple. In 1966, in lieu of the development plans of Chip Bee Gardens, the school was moved to North Buona Vista Road, roughly where the Metropolis and the MOE headquarters now stand. In 1982, it was renamed Keok Ming Primary, and 5 years later it was renamed again to Keming Primary, and moved to its current location at Bukit Batok.

There was once a police station located at the junction of Holland Road and Holland Avenue. The police station appeared in street directories until after 1978, while the earliest mention of it that I could find was in 1929. Other than that, I have found very little information on it. 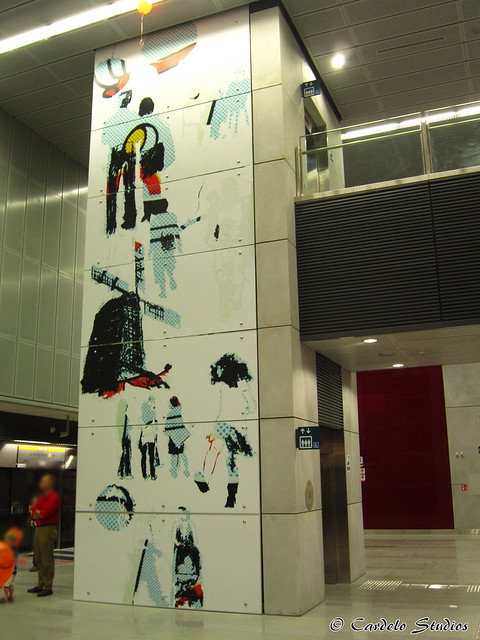 Today, Holland Village is connected to the larger MRT network via the Circle Line. While this has brought about greater human traffic and increased commercial viability in the area, it has also changed the character of the place indefinitely. 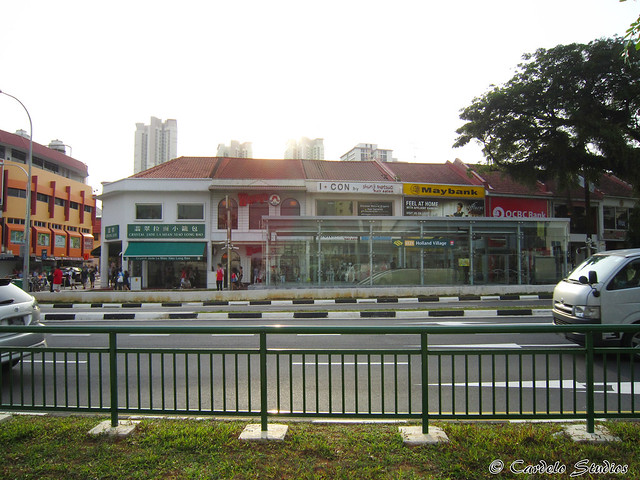 The MRT station exit looks out of place amidst the shophouses

This entry was posted in Districts / Areas and tagged Found, Losing, Lost. Bookmark the permalink.