Empress Place is Singapore’s first civic district established by the British. The name was given 1907 by the Municipal Council, in honour of Queen Victoria, and refers to the public square that is still in existence today. By the late 1980s, most of the governmental and administrative functions have been relocated, and today it serves more as a recreational and cultural district. 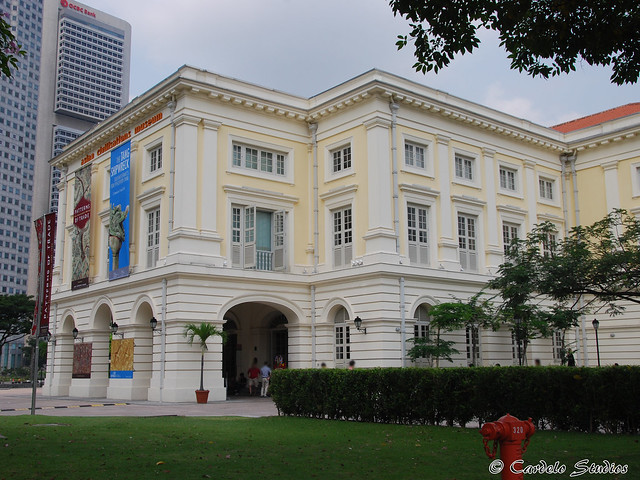 Built by convict labour, this building was intended to be used as a courthouse, in place of the Maxwell House. However, it was only used as such until 1875, after which it became offices for governmental departments. Back then, it was simply known as Government Offices, until 1907, when it was renamed Empress Place Building, in lieu of the naming of the public square in front of it.

The building was expanded 3 times, in 1880, 1904 to 1909, and 1920. Over the years, the building housed numerous government offices, such as the Secretariat, Audit Office, Public Works and Medical Department, the Inspector General of the Police Force and so on. After Singapore’s independence, it continued to house offices such as the Immigration Department, the Registry of Births and Deaths, and the Singapore Citizenship Registry.

In 1890, the building was chosen as the Geographical Origin of Coordinates in Singapore, when the first Triangulation of Singapore was conducted by the Survey Branch of the Public Works Department. More precisely, it is located at the flagstaff of the building, or 1°17’15.528″N and 103°51’10.808″E. The Geographical Origin is important as all local maps and distances will be measured from that point. Empress Place Building was perhaps chosen out of pure convenience, as the Surveyor General’s office was located in this building. By 1910, the Surveyor General had moved his office to the General Post Office building, and by the 1930s, the flagstaff was removed. However, this Origin remained in use until 2005, when it was moved to a point above Pierce Reservoir (103° 50′ 00″ E and 1° 22′ 00 N) due to its simpler coordinates. Today, no evidence of the flagstaff remains, as the original roof had been removed and replaced with a glass roof. 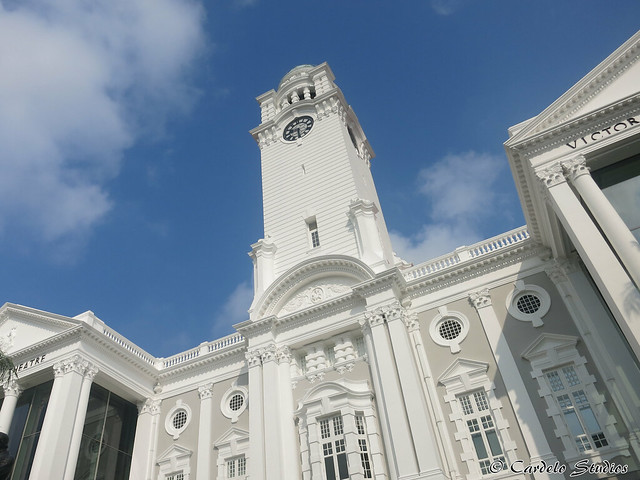 The Victoria Theare & Concert Hall is actually a complex of 2 buildings connected by a clock tower in the middle. The first building to be constructed was the Town Hall (today’s theatre), built as a larger replacement for the old Assembly Rooms, located where the Old Hill Street Police Station now stands. It housed a theatre on the ground floor and offices for the Municipal Commissioners on the second floor. By 1893, the offices moved out of the building as it is no longer sufficient to accommodate them. From 1874 to 1876, the Raffles Library and Museum of the Singapore Institution was situated in the Town Hall, which was eventually deemed too small. 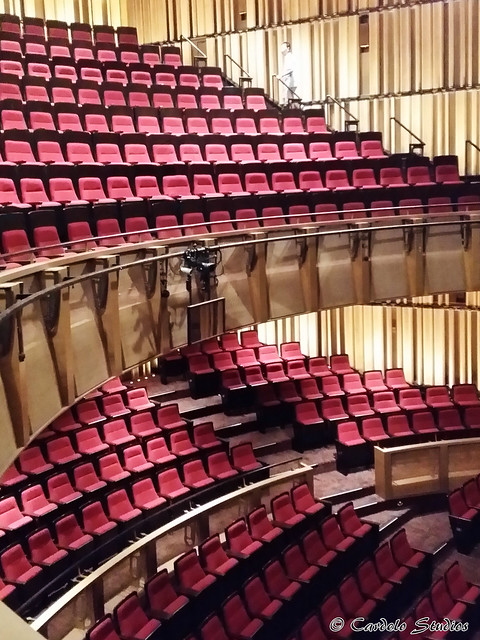 Victoria Theatre, after the 2010s renovations

The Victoria Memorial Hall (today’s concert hall) was built from 1902 to 1905, as a memorial for Queen Victoria, who had passed away in 1901. The fund-raising scheme for the construction of the memorial hall was so successful that they had $28,000 to spare. The extra money was used to refurbish the Town Hall, unifying the facades of the two buildings. 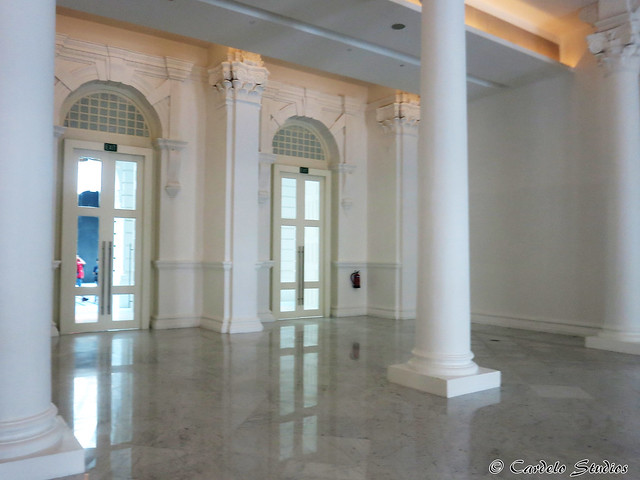 The ground floor of the Victoria Concert Hall, after the 2010s renovations

A year later, the clock tower was completed. A courtyard was located behind the clock tower, in between the 2 buildings. In 1919, the Raffles Statue was shifted from the Padang to its current location in front of the complex, to commemorate 100 years of Raffles’ arrival. 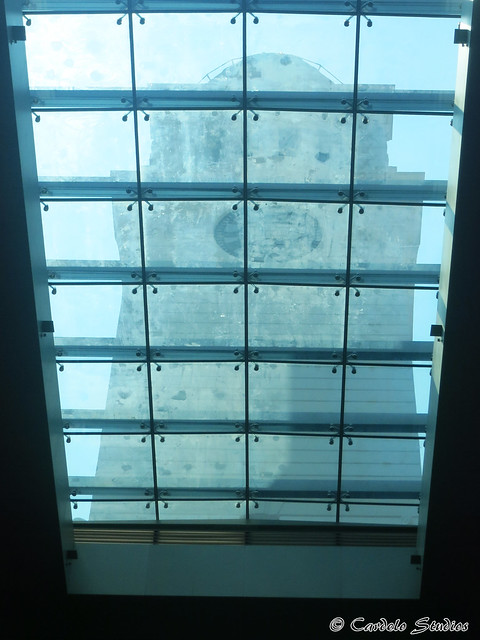 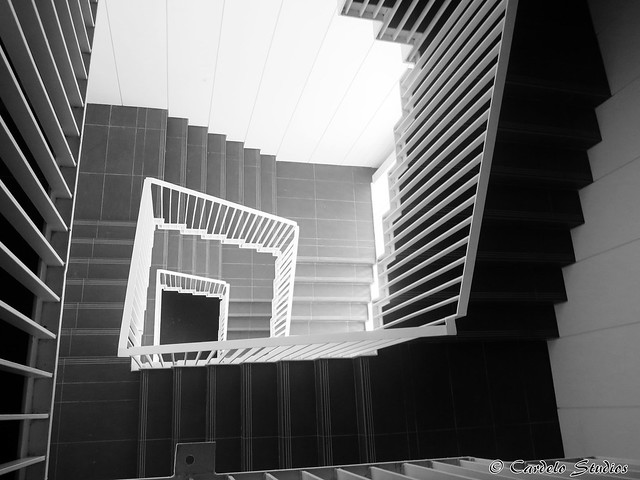 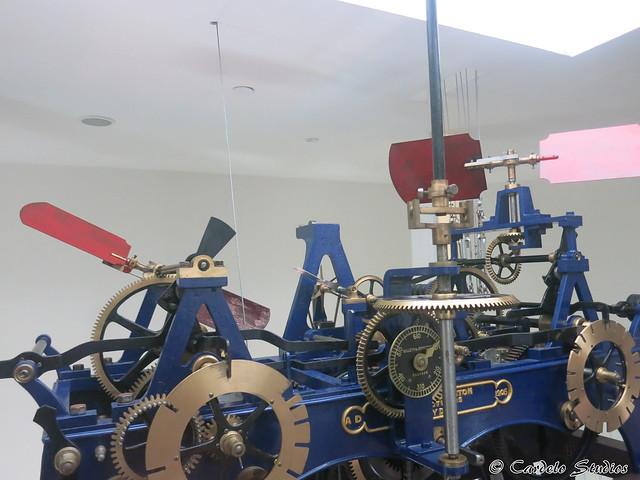 The first round of major renovations occurred in 1952 to 1958. Improvements such as air-conditioning were added. The town hall was refurbished, and its capacity increased to 904. This reduced the size of the central courtyard, making the overall plan of the complex asymmetrical. The Town Hall was also renamed Victoria Theatre. The ground floor of the Memorial Hall was also renovated for a Colombo Plan meeting. 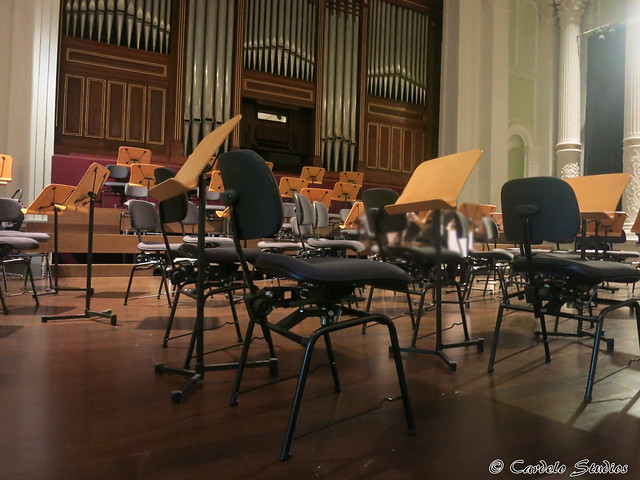 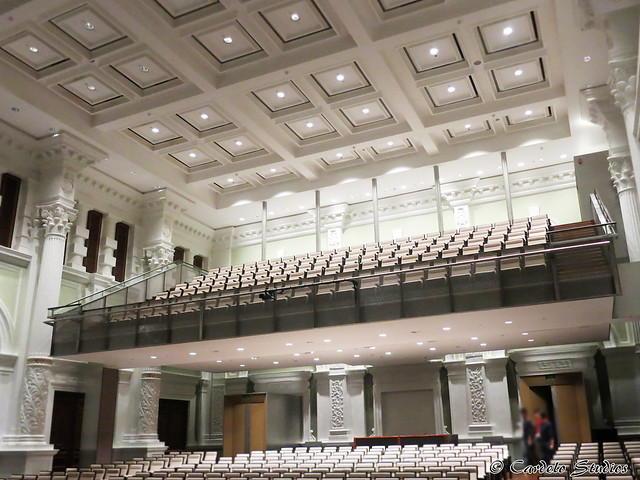 The gallery in the Concert Hall, after the 2010s renovations

In 1979, the Memorial Hall was renovated and renamed Victoria Concert Hall. A gallery was added to increase the seating capacity, but in order to support the extra load, new columns were added, which obstructed the existing entrance staircase. The Singapore Symphony Orchestra then moved in, and used the Concert Hall as their main performance venue until the completion of the Esplanade – Theatres on the Bay. 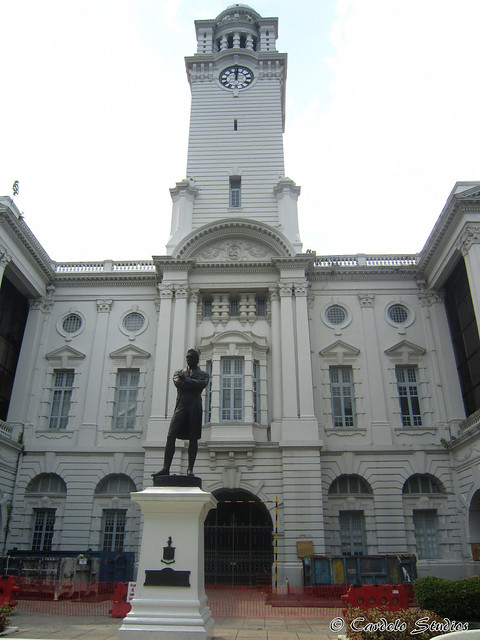 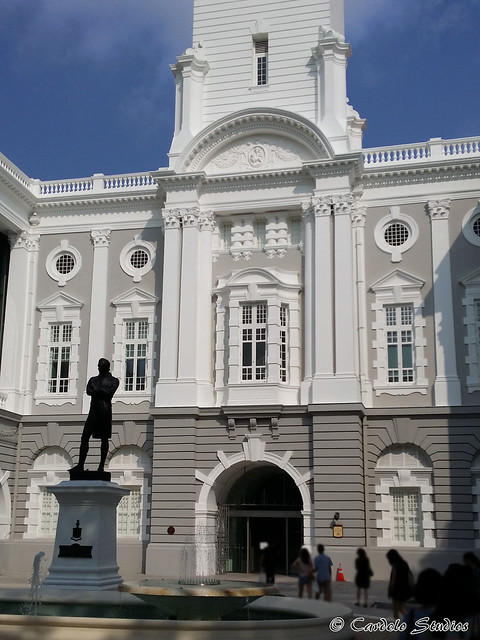 Before and after renovations 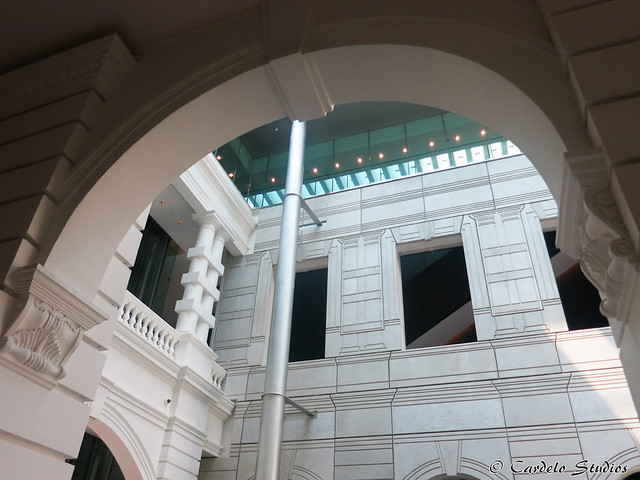 From 2010 to 2014, the complex underwent a second round of renovations. The Theatre was reduced to a size closer to the original, freeing up the occupied parts of the central courtyard. The lift core that was added to the courtyard was also removed, reinstating the central passageway that leads to the Arts House at the back. The gallery in the Concert Hall was reduced, and the additional columns replaced with thinner steel ones located at less obstructive positions. 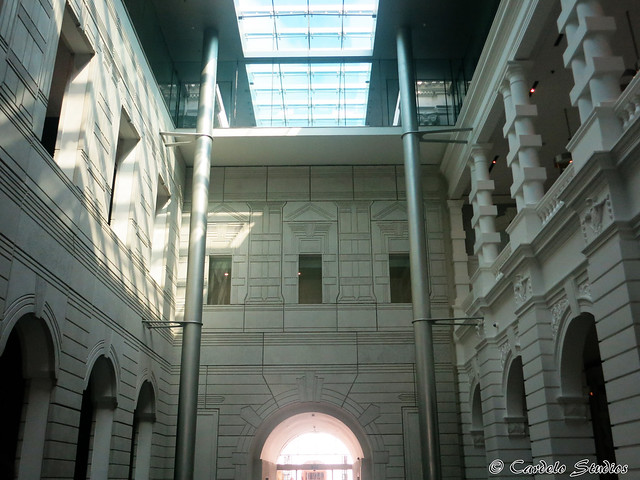 The reinstated central courtyard. The walls on the left and centre only have imprints of the original designs, as the original walls were demolished in the 1950s renovations 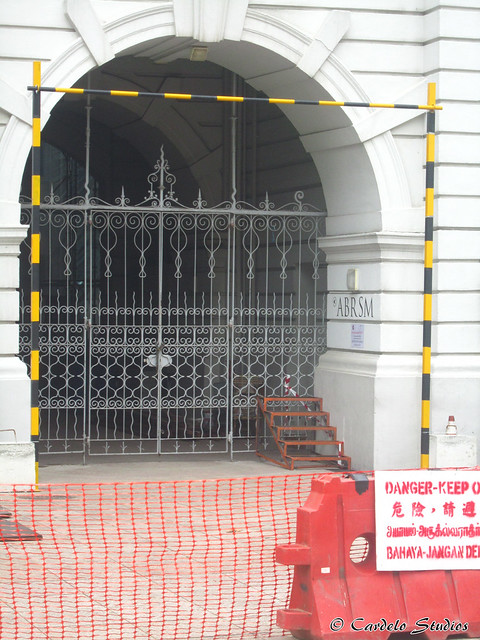 Entrance to the central courtyard prior to the 2010 renovations

Over the years, the complex had been used for numerous significant events. The Memorial Hall was used for the trials of WWII Japanese war criminals, and in 1954, the People’s Action Party’s inaugural meeting was also held there. The original version of Singapore’s National Anthem, Majulah Singapura, was performed for the first time in Victoria Theatre in 1958. Television Singapura, Singapore’s first television station, was launched in the Memorial Hall in 1963. 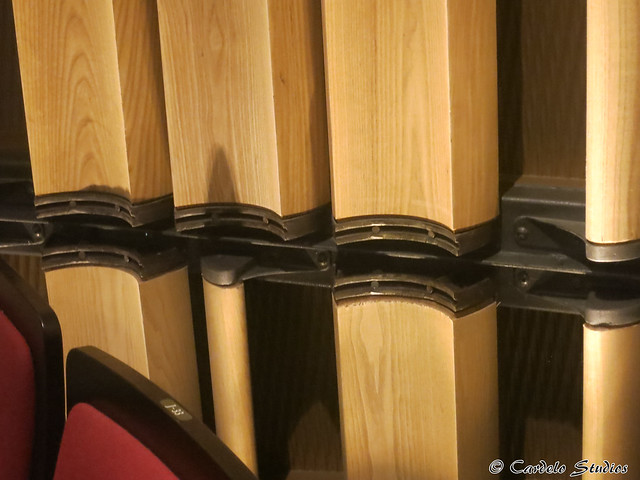 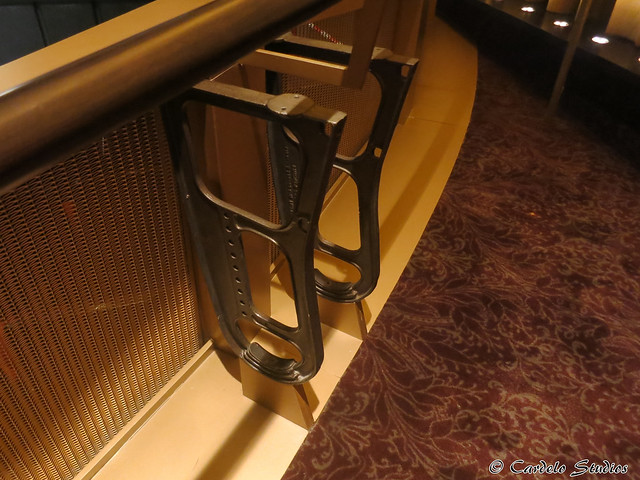 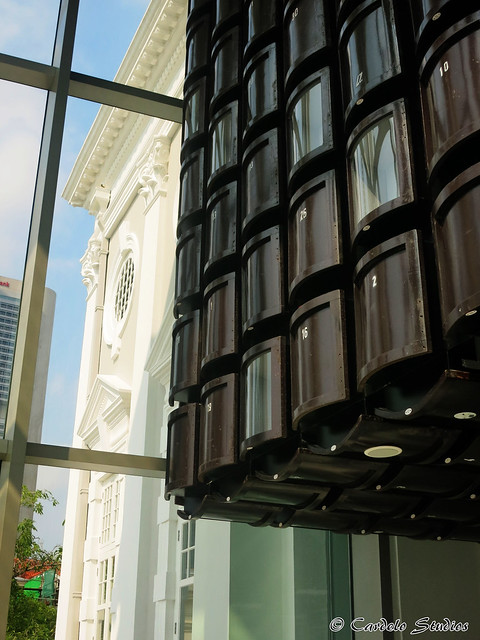 Parts of the old theatre seats are used as acoustic elements, railings and a giant rubik’s cube in the new theatre after the 2010s renovations 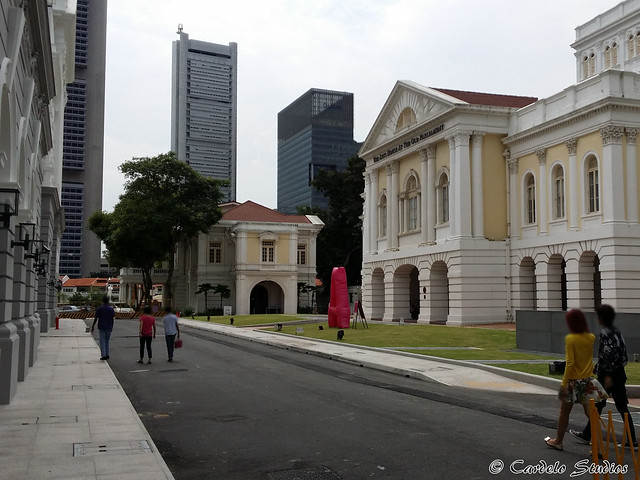 The Arts House at the Old Parliament 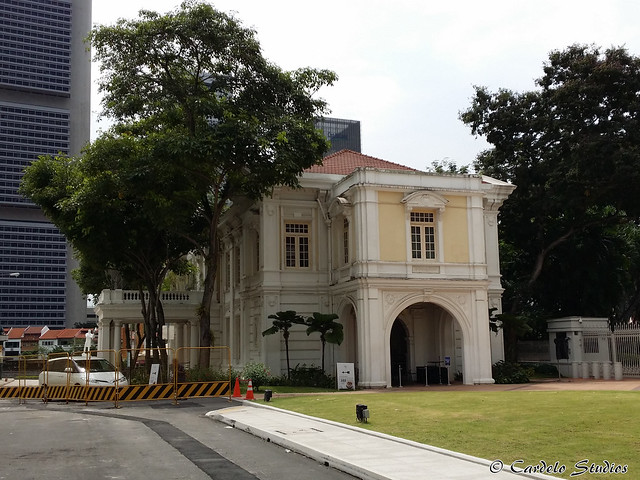 In 1901, the building underwent extension works, which saw Coleman’s Neo-Palladian design being converted to Victorian. 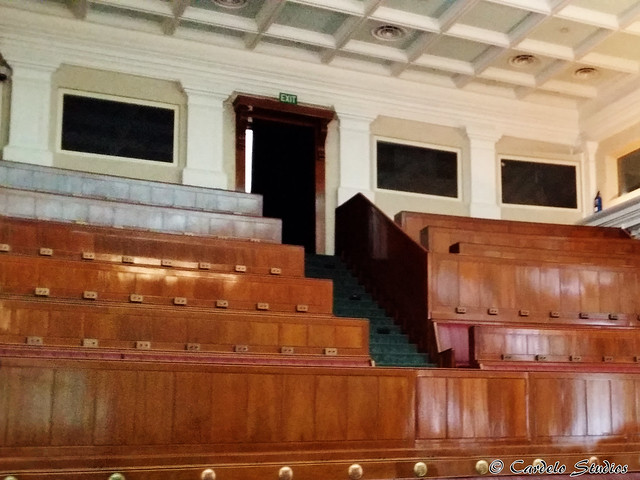 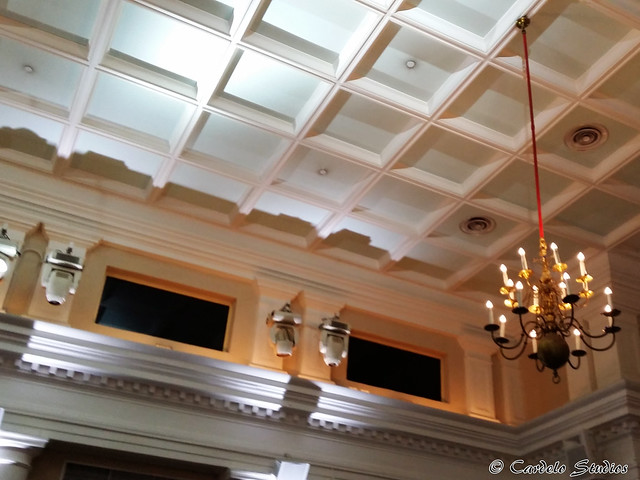 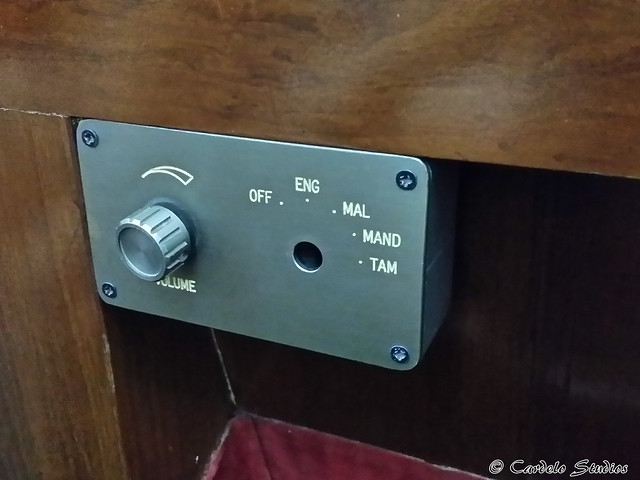 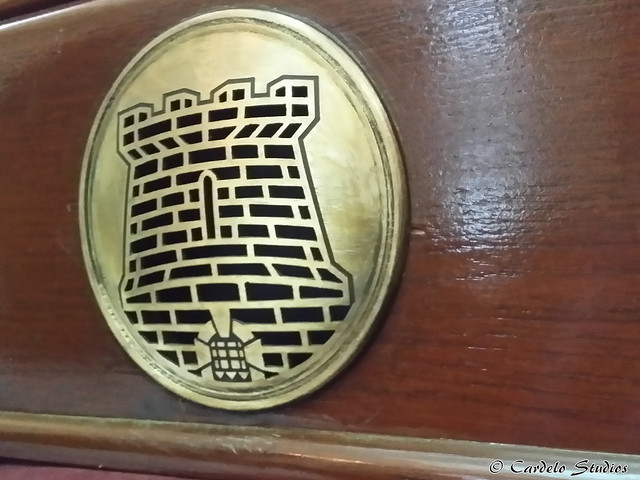 The chamber in the old parliament building

On the side of the building facing Parliament Place, a bronze elephant statue is located there. It was a gift from King Chulalongkorn of Siam after his visit in 1871. It was originally placed in front of Victoria Town Hall and Memorial Hall, before being displaced by the statue of Raffles in 1919. 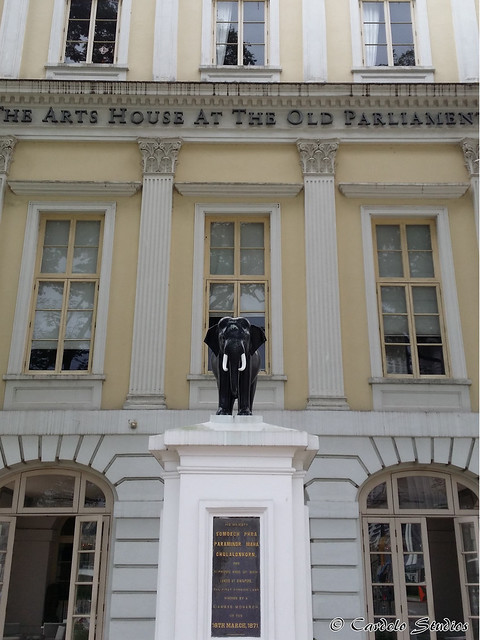 As can be seen, the 3 buildings at Empress Place played prominent roles as civic buildings, and the various governmental and administrative functions seem to be involved in some sort of musical chairs, shifting among the buildings. I tried sorting out this confusing part of this place’s history into the table below. 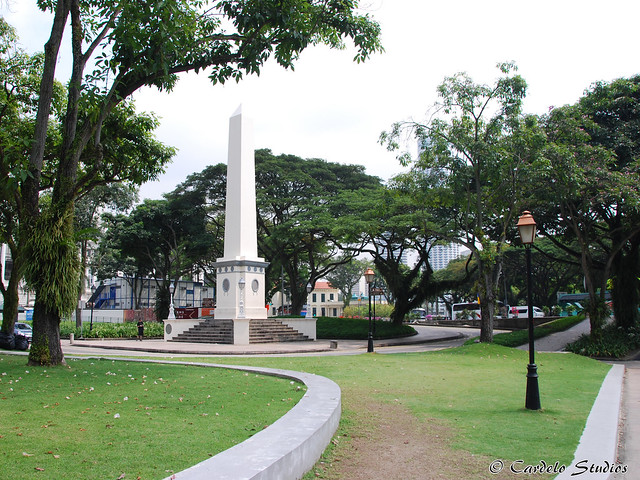 Dalhousie Obelisk, next to the yet-to-be-pedestrianised Empress Place

In addition to the abovementioned civic buildings, there is also the Dalhousie Obelisk, located in front of Victoria Theatre and Concert Hall. In 1850, Lord James Andrew, the Marquise of Dalhousie and Governor-General of India visited Singapore, to consider changes in the local administration, such as a reduction of administrative expenditure. To win over Dalhousie, the local merchants and traders erected the obelisk as a commemorative structure, and named the pier by which he came ashore Dalhousie Pier. The obelisk also serves as a reminder for the benefits of free trade.

The Dalhousie Obelisk was originally located near the Padang, where Connaught Drive now runs through. In 1886, in lieu of land reclamation works, the obelisk was shifted slightly (to where the Cenotaph is now) to make way for the construction of Connaught Drive. 5 years later, it was shifted again to its current location, under the orders of Governor Sir Cecil Clementi Smith. 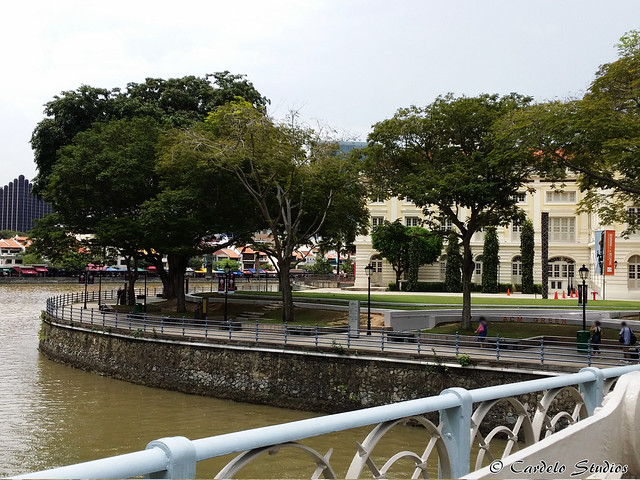 Where Empress Place Food Centre used to be 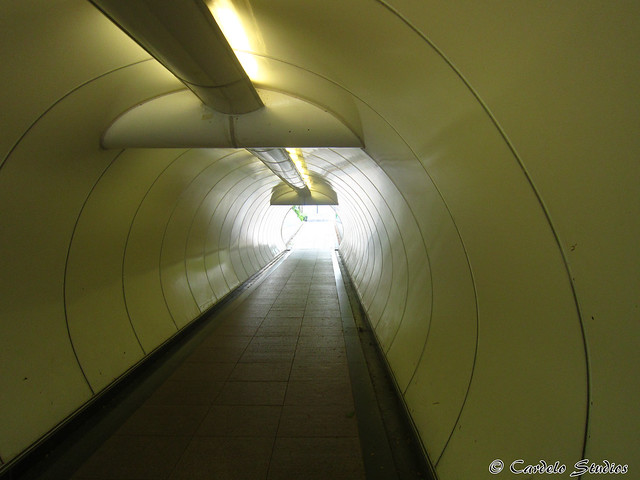 In early December 2014, it was announced that the Civic District, including Empress Place, will be revamped to become more pedestrian-friendly. In particular, the Empress Place vehicular road will pedestrianised, and part of Fullerton Road wil be realigned to increase the public area in front of the Asian Civilisation Museum. Anderson Bridge will also be partially pedestrianised.