Sentosa and its Rail Corridor

Recently, I came across a number of old photos of Sentosa showing how it was like before Resorts World came in. Indeed, many things have changed over the last 10 years, with familiar places such as the Ferry Terminal and Asian Village demolished, and the old monorail system decommissioned. While many things have changed, some things still remain. 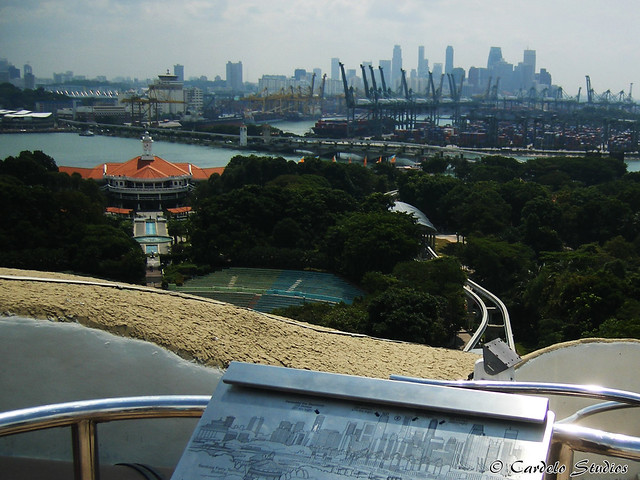 Caught at the crossroads: the Ferry Terminal (Sentosa Monorail) and the Waterfront (Sentosa Express) Stations standing beside each other 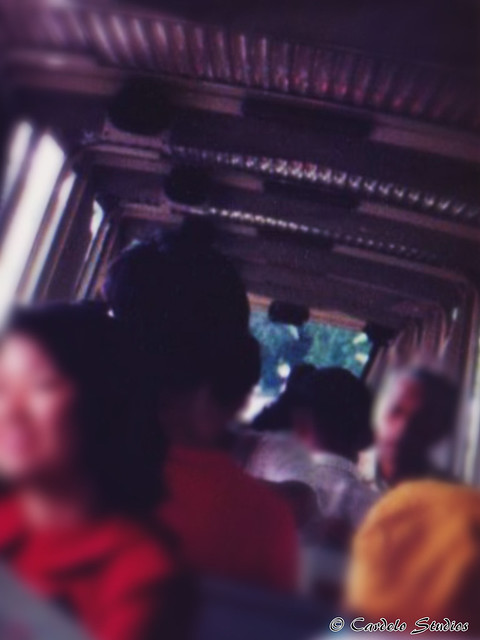 For many years, the monorail system was the main means of transport around the western half of Sentosa, connecting many of the key attractions scattered around the island. The system ran in a unidirectional anticlockwise loop, meaning that passengers who wish to travel to an earlier station had to go a full round in the other direction instead. The rides were initially charged, but later became free of charge for all visitors on the island.

The trains were not air conditioned, and travelled rather slowly by today’s standards. However, passengers were thus able to enjoy the sceneries around the island up close, especially when passing by areas away from the main attractions and less travelled to on foot.

In 2005, the monorail system was decommissioned and subsequently replaced by the Sentosa Express. However, evidences of the old system still remain around the island in various forms. 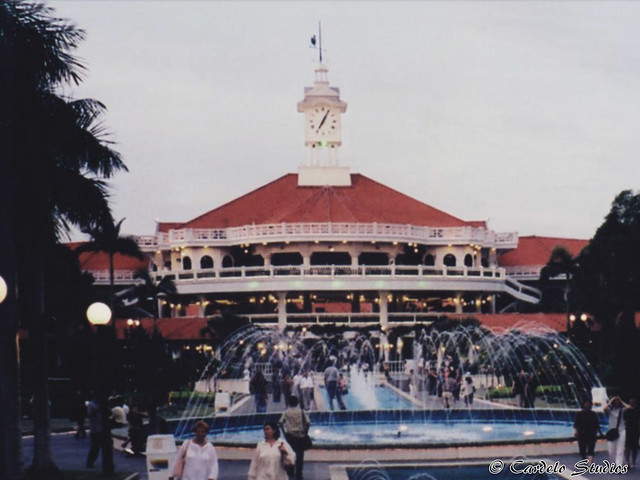 The Ferry Terminal, with the Fountain Gardens in front

The Ferry Terminal was constructed 5 years after monorail system started running, but quicky became its de facto “main station”. Back then, there was no Sentosa Express or Boardwalk connecting Sentosa to the mainland, and most visitors would travel to the island via a ferry from the World Trade Centre. The Ferry Terminal building was thus the first building that welcomed visitors to Sentosa. In today’s transport system terminology, it would be the interchange between the ferry service and the monorail system. Amenities in the terminal building included a Burger King outlet and a parrots’ photo-taking corner. 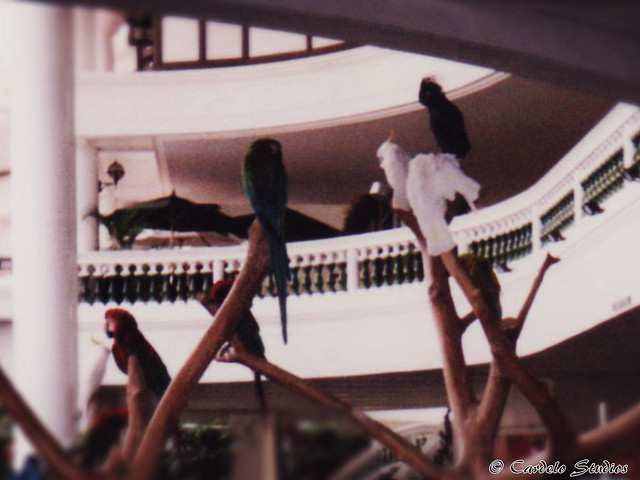 The parrots of the Ferry Terminal

When it was first completed, the Ferry Terminal was deemed as the new landmark of Sentosa. Sitting prominently along the northern shore of the island, and clearly visible from the mainland, it remained as one of the most recognisable buildings on Sentosa, right up till its demolition in 2007. 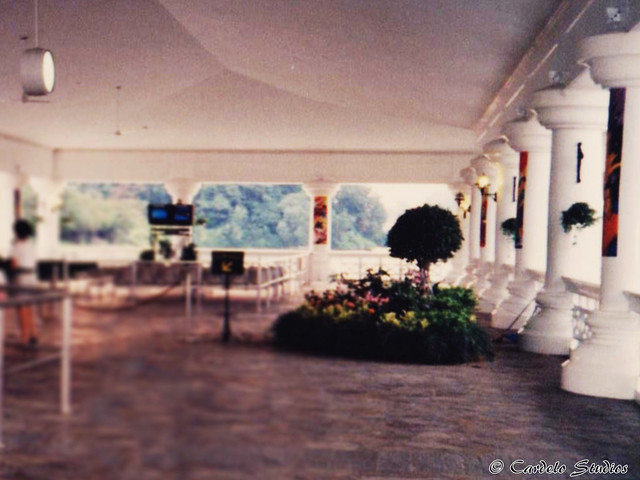 The boarding and alighting bays for the ferry service 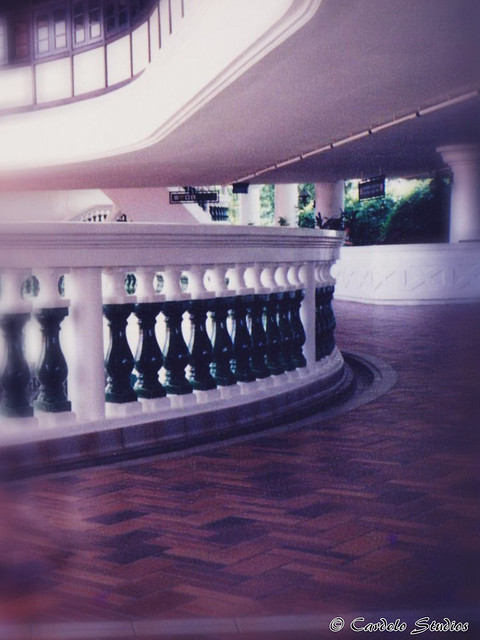 Today, the Crane Dance amphitheatre sits approximately at its location. 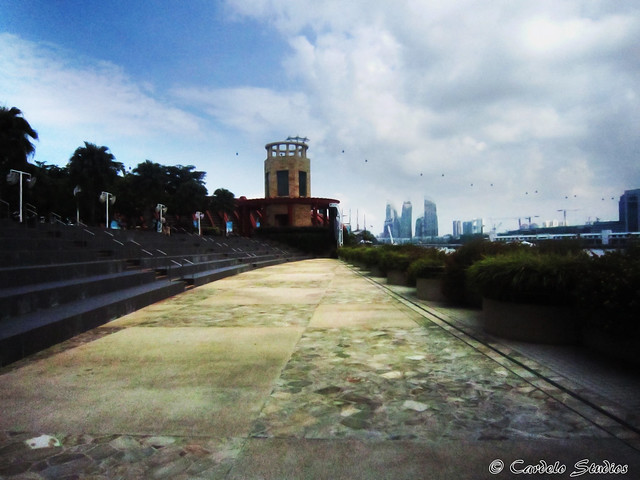 The monorail track ran westwards from the Ferry Terminal, along the northern shore of Sentosa, passing by attractions such as the Lost Civilisation before reaching Underwater World. 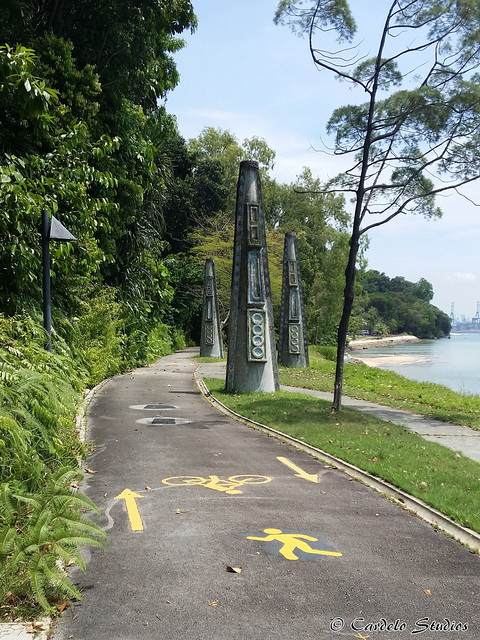 Remnants of the Lost Civilisation. The imprints on the ground are probably footings for the monorail track 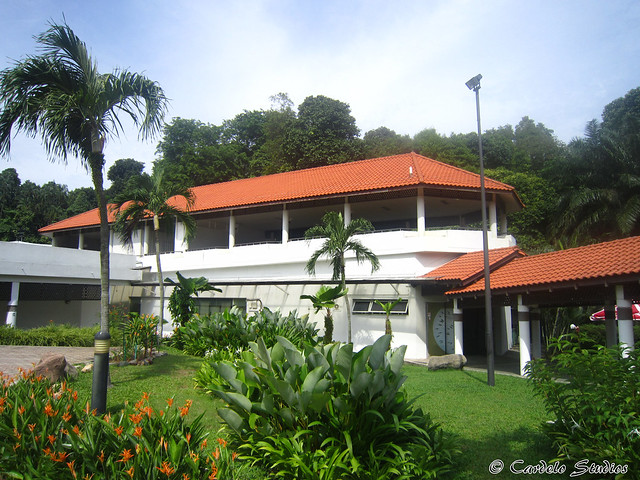 The Underwater World station was the last addition to the monorail system, and was opened alongside the new attraction of that time, the Underwater World. This oceanarium was a major attraction, featuring a travellator that brings visitors through an acrylic underwater tunnel. Marine creatures will then swim over the heads of the visitors, providing a spectacular view of this underwater world.

Today, however, the Underwater World is outshined by the SEA Aquarium, another oceanarium on Sentosa, located at a much more convenient location. 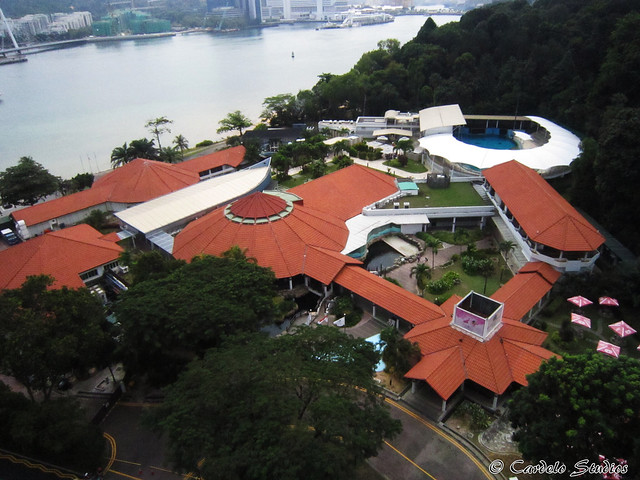 The Underwater World monorail station building now houses the fish reflexology spa, one of the new attractions launched in 2006.

After the Underwater World station, the monorail track made a gradual ascend along Siloso Road, towards Fort Siloso. 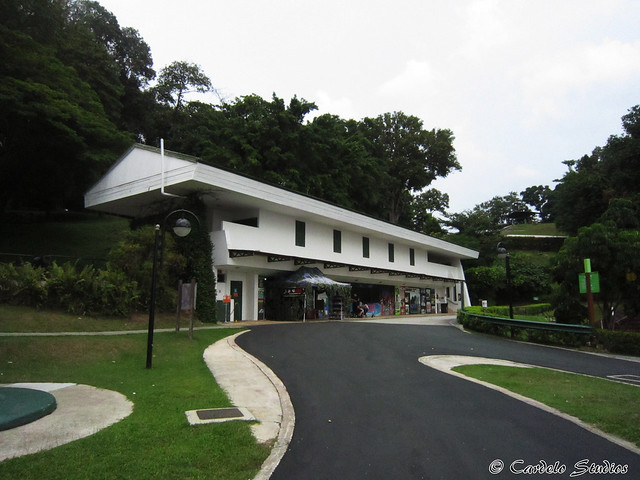 Fort Siloso and Underwater World were probably the two attractions that benefitted the most from the monorail system. Located at the western end of Sentosa island, these two attractions are too out of the way, and would be too tiring to reach on foot. Fort Siloso, in particular, is not even close to the nearest bus stop at Underwater World. The monorail system brought visitors right to their doorsteps, making it a lot more convenient for visitors. 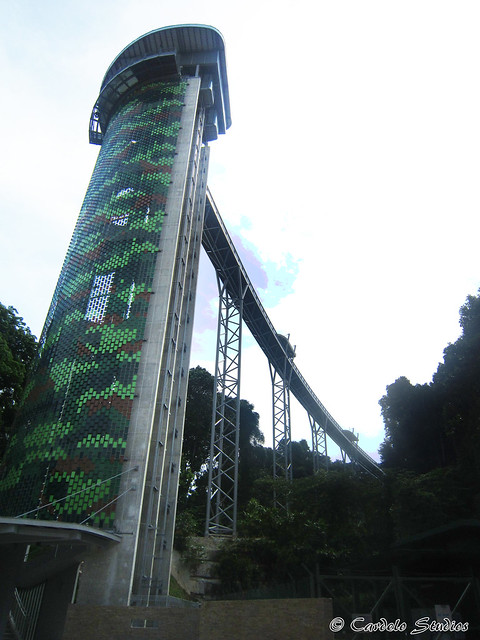 It is no wonder that the monorail system was crucial for Fort Siloso. Being the only attraction that tapped on the island’s military past that the rest of Sentosa is so eager to leave behind, it targeted a very different crowd from the other attractions. By having a monorail station solely serving it, at the very least it gave the impression that Fort Siloso was one of the seven places you must visit. 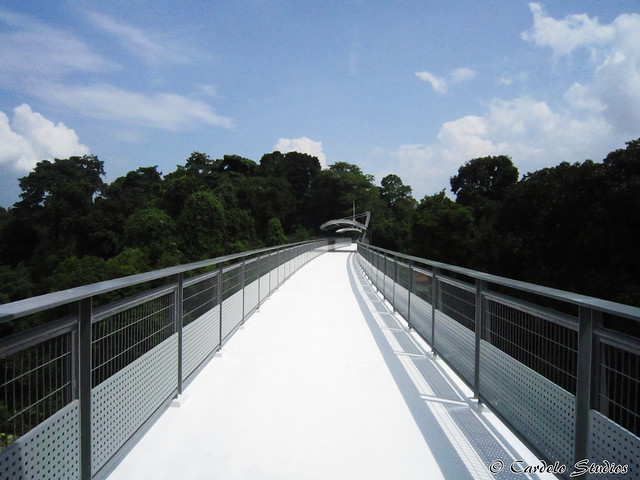 There have been attempts recently to attract the crowd back to Fort Siloso. The new Fort Siloso Skywalk makes it much easier to access the attraction. With the lifts, visitors can avoid the slow, manual, 11-storey ascend uphill. From July 2015 onwards, the entrance fee to Fort Siloso has also been waived permanently. 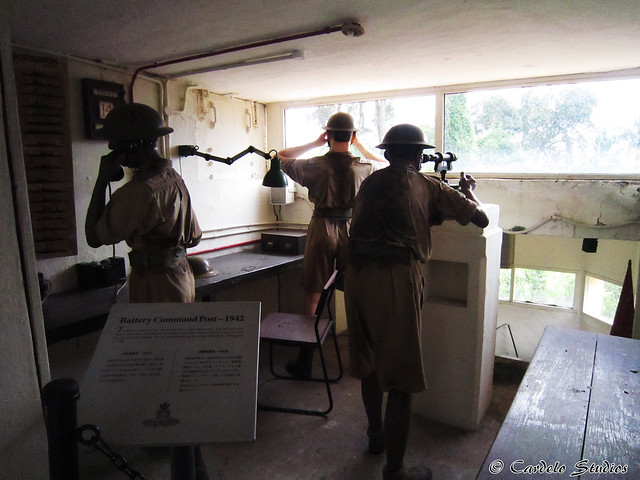 The old monorail station has been converted into Surrender Chambers, a gallery featuring waxworks depicting scenes from two surrender ceremonies in WWII. 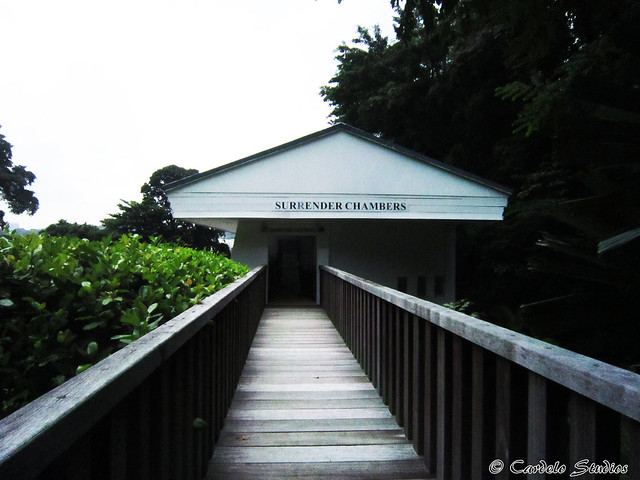 The monorail track leaving Fort Siloso ran parallel to the incoming track, before turning towards Siloso Beach and then into the woods at Mount Imbiah. Along this stretch, parts of the old tracks can still be seen. 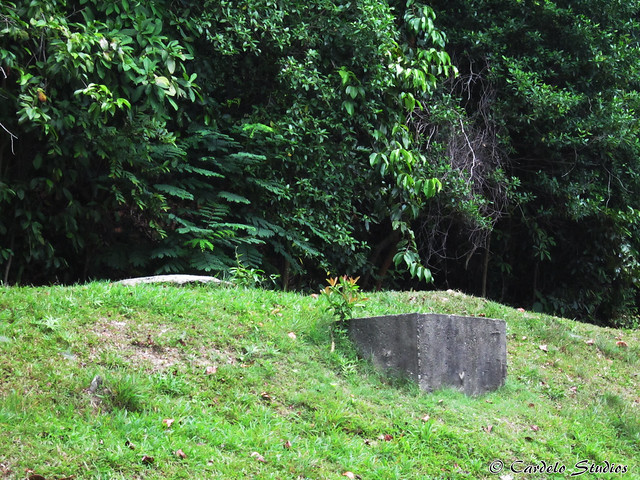 The concrete footings of the monorail tracks 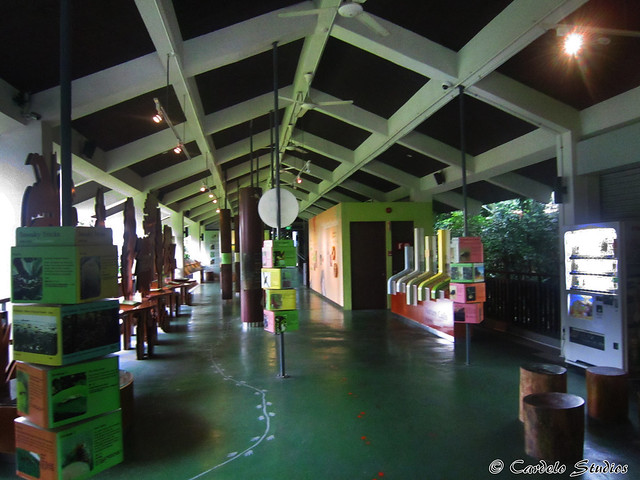 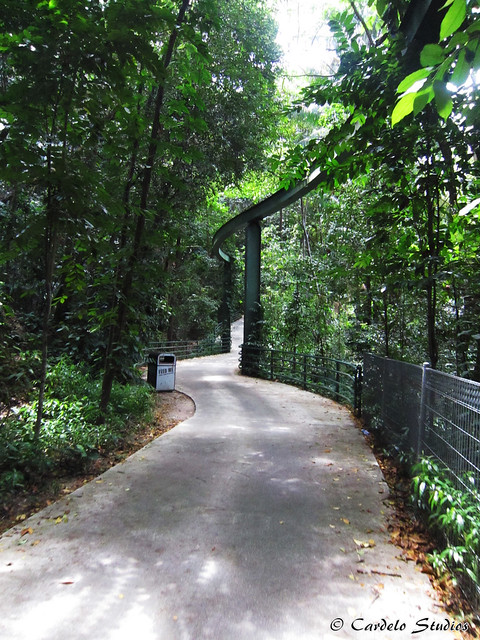 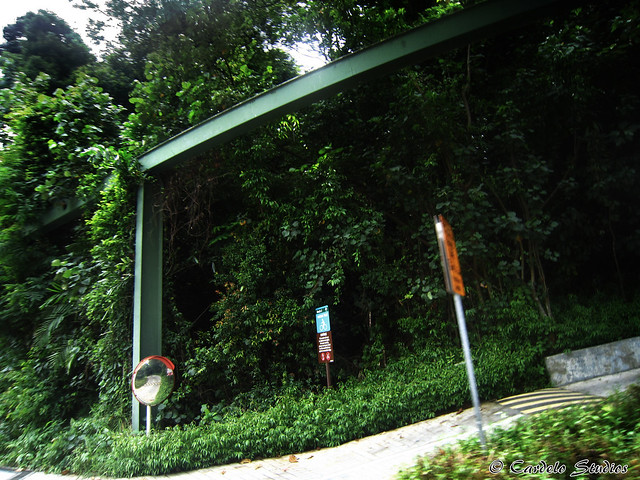 Segments of the tracks leading towards Cable Car Station were not dismantled, and are still visible today

Today, the Cable Car Monorail Station is the gallery and starting point of the Nature Discovery, or as I prefer to call it, Sentosa’s very own “Rail Corridor”. This treetop walk was built right over the old monorail tracks leading from Mount Imbiah into this station, and serves to bring visitors from Imbiah Lookout to the Nature Walk. Visitors can reminisce the experience of travelling in the monorail through the secondary rainforest canopy, albeit at an even slower pace. 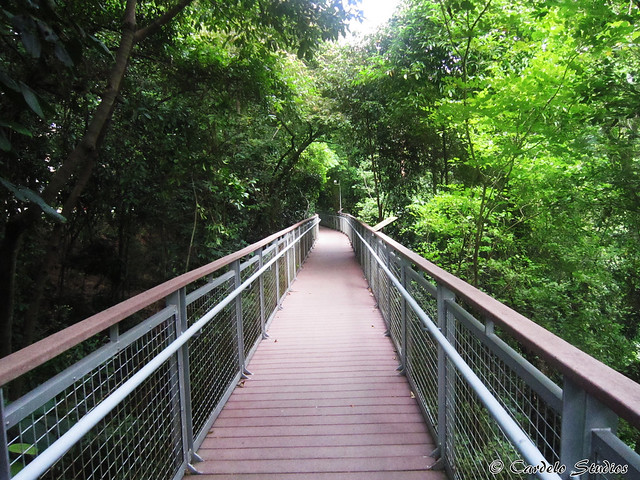 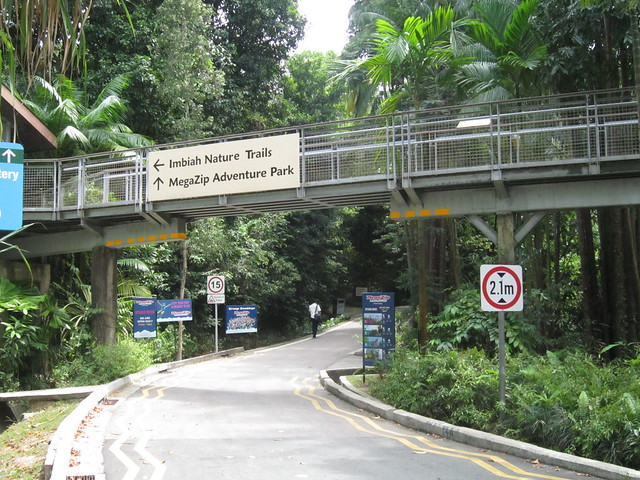 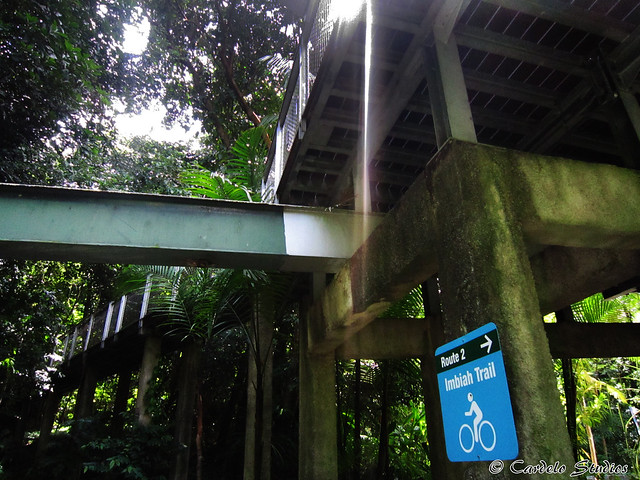 The old tracks can still be seen underneath the treetop walk

After the Cable Car Station, the monorail track turned around the Merlion, and headed towards the beach. 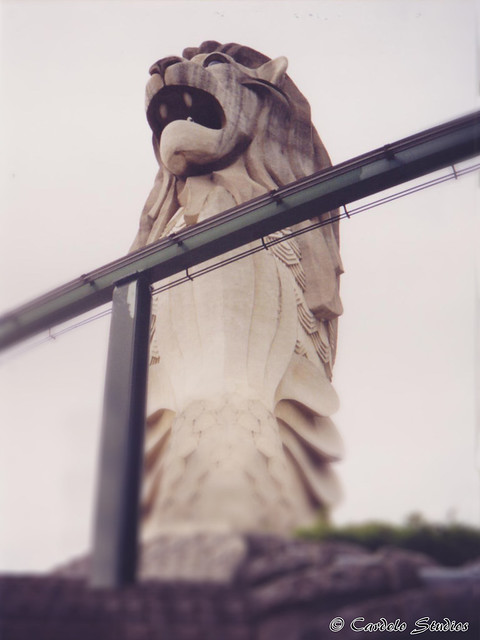 The monorail track in front of the Merlion 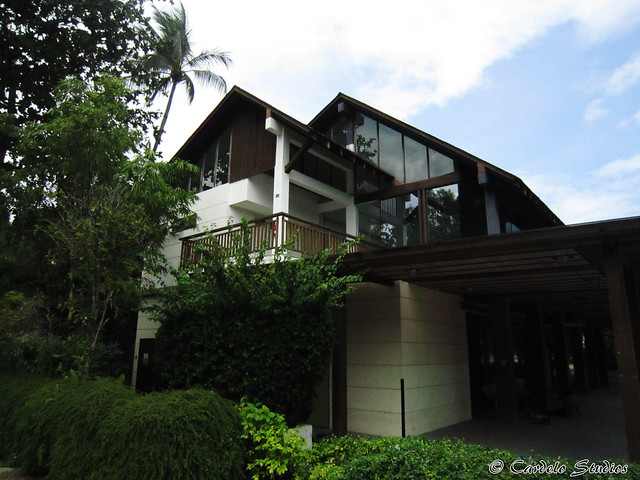 The Central Beach station was also known as the Palawan Beach station. Either way, it was the only station that served the sandy beaches of Sentosa. Travelling between the different beaches would then be done on foot or via the beach trams, which are still in operation today. 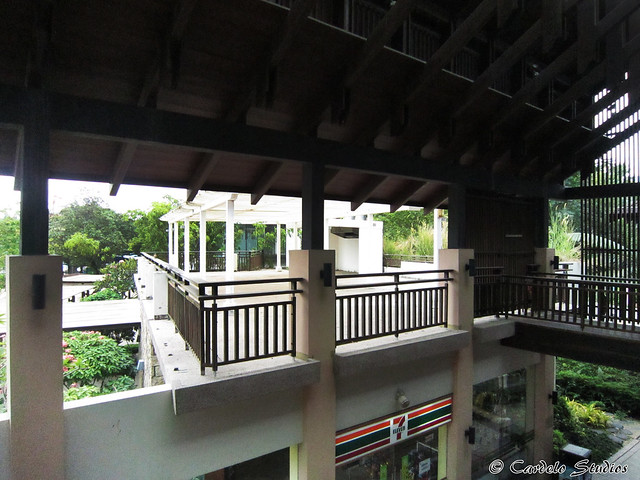 The restaurant space on the second level, as seen from the extention

The station building was converted into two restaurants – Silk Road taking the ground floor and Braise taking the second floor. Both restaurants have since closed down. An extention to the building was also constructed, housing a convenient store and a resting area for the beachgoers. 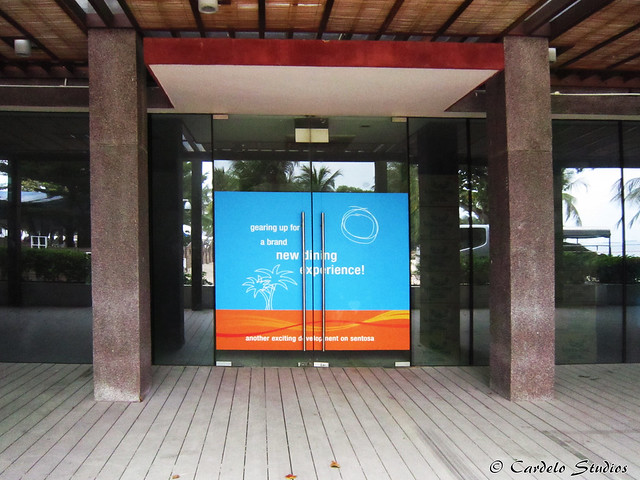 The building is currently vacant 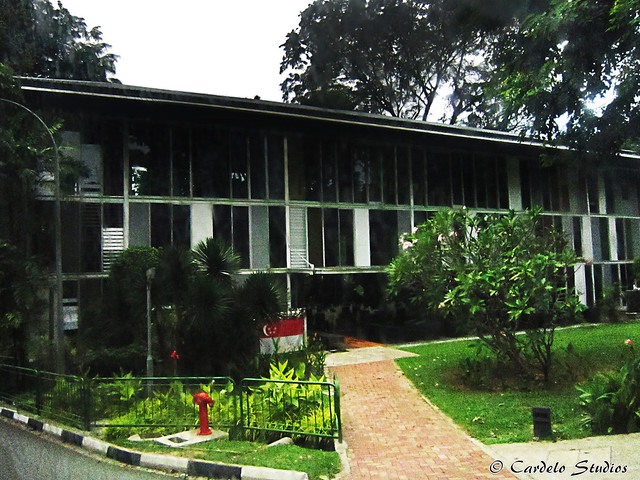 Among the monorail stations that were not demolished, Ficus Station was the hardest to track down, for a few reasons. It was one of the two stations that I was least familiar with (the other being Gateway), as it served mainly the chalets and the golf courses. I don’t remember much about this station, as I probably only alighted there a couple of times out of pure curiosity. There were also few landmarks nearby in the older maps that I could pinpoint. Furthermore, the building has since been renovated beyond recognition. 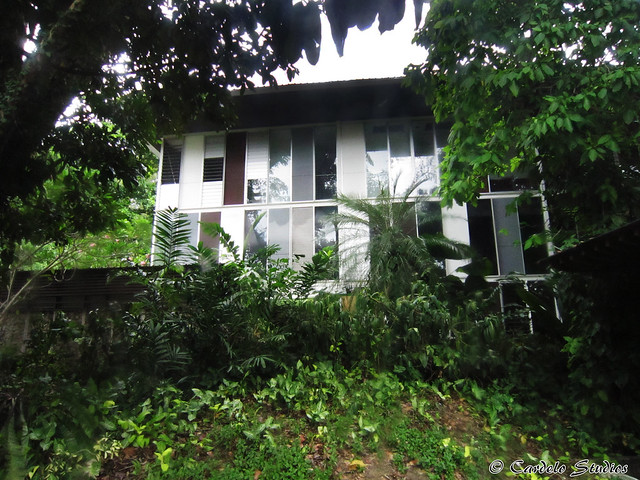 Today, it houses a bar known as Suburbia.

The journey from the beaches back to the Ferry Terminal had always been uneventful. I can probably count the number of times I alighted at Ficus and Gateway stations with one hand, if I can actually recall. My memories of this stretch have been blurry. I remember the Maritime Musuem, which I had always given a miss, because we would have spent too much time at the beach and were rushing to leave, or to grab dinner and catch the Musical Fountain show. I remember lots of greenery, more pruned than the secondary rainforests at Mount Imbiah. Other than these, I never really know what lies around this area, or for that matter, the eastern half of Sentosa. This last stretch was a journey of mystery, anticipation and reluctance.

In a way, the monorail system had shaped the way visitors view and travel around Sentosa, whether consciously or subconsciously. “After arriving at our Ferry Terminal, you should visit our oceanarium, have a look at our historical and natural heritage, visit our beaches, and rest for the day at one of our chalets.” This current bus system just does not have a similar effect. Maybe it’s because the monorail tracks are very visible, both physically and on maps. Or maybe it’s the mere fact that a 2-storey station was built to serve these attractions, making them more worthy for a visit. Either way, the monorail system was clearly meant to bring visitors around Sentosa. In contrast, the current Sentosa Express seems to be too eager to push visitors towards Resorts World and the beaches.