The HDB Complexes of Sio Poh

Housing in the central area, including both tua poh and sio poh, had always been a problem in post-war Singapore. The Singapore Improvement Trust (SIT) attempted to tackle the problem by building a handful of new housing estates, such as Outram Hill, Winstedt Court and Stamford Estate (mentioned below). In 1960, the Housing & Development Board (HDB) was established in 1960, taking over the role of tackling housing shortage problems from the SIT. With the establishment of the Urban Renwal Unit in 1964 (renamed URD – Urban Renewal Department in 1966) and the kickstart of the urban renewal program, a number of complexes were constructed to house the people and their businesses. These complexes usually include a large number of housing blocks “weaved” together by a commercial network on the lower floors (examples include Outram Park and Beach Road Garden). With the departure of URD in 1974 (to form a separate entity, URA), the subsequent housing complexes became more inward looking. The commercial podium becomes more substantial in scale, while shrinking in footprint, creating a commercial “hub” that serves the residential towers that sit over it. This is the predominant design model adopted by HDB in sio poh. 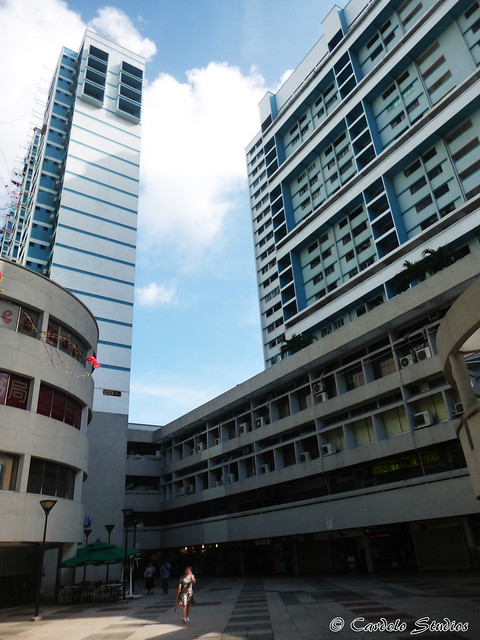 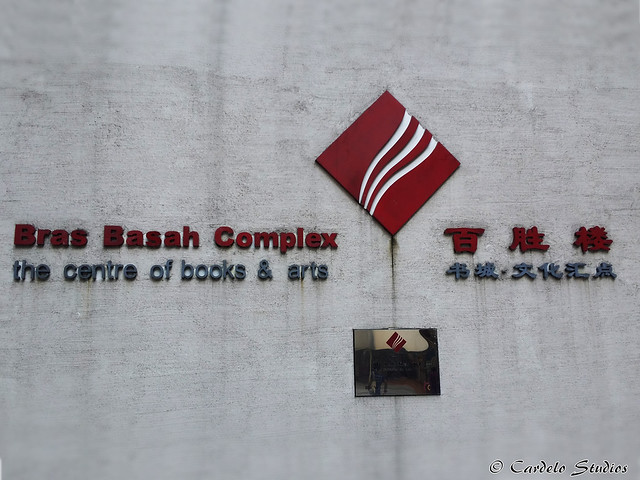 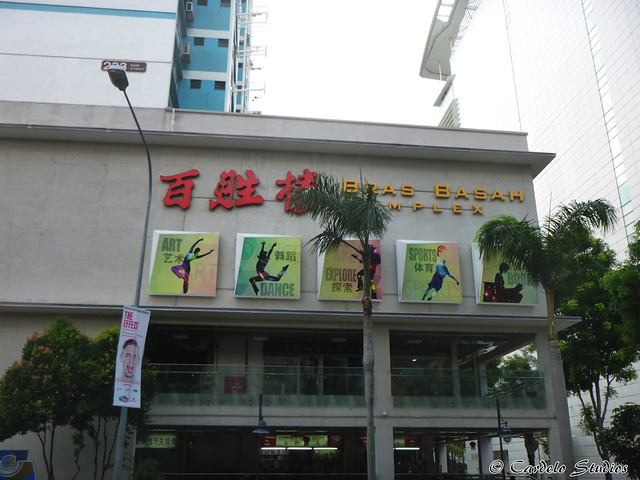 Built in 1980, Bras Basah Complex is best identified with the large number of bookstores housed within its 5-storey commercial podium. Although officially known as bai sheng lou (百胜楼) in Mandarin, most locals would refer to it as shu cheng (书城), or “City of Books”. This high concentration of bookstores in this area was apparently present long before the complex was constructed. These bookstores, located in the shophouses along Bras Basah Road, served the schools in the vicity, including Raffles Institution, Raffles Girls’ School and Saint Joseph’s Institution. 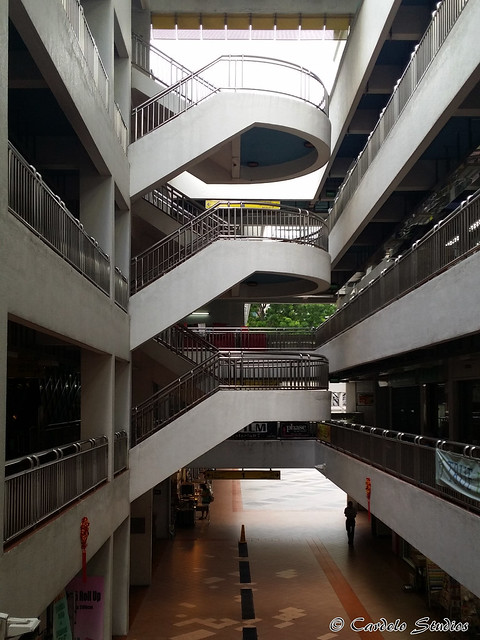 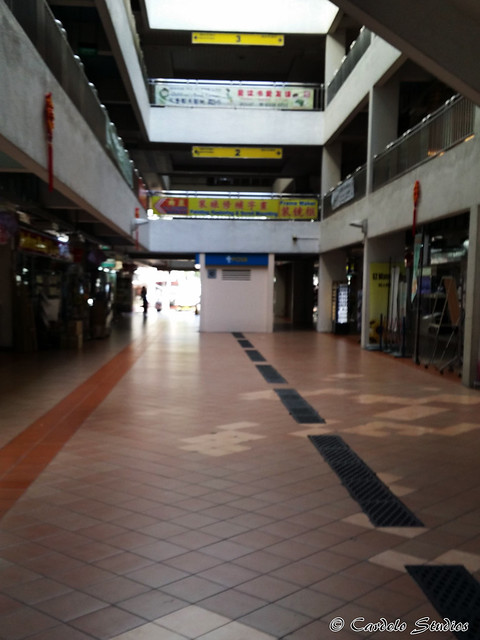 With the urban renewal program, the bookstores were shifted to Bras Basah Complex, while the nearby schools were relocated to other parts of Singapore. Today, Bras Basah is known more as an arts and design precinct, with some of the original educational-use buildings converted to museums and arts venues. Bras Basah Complex was affected by this transformation as well, and the increased number of arts and crafts-related shops bears testimony to that. 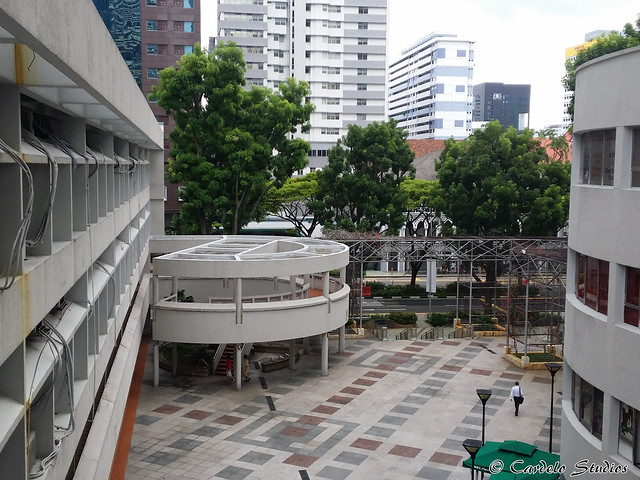 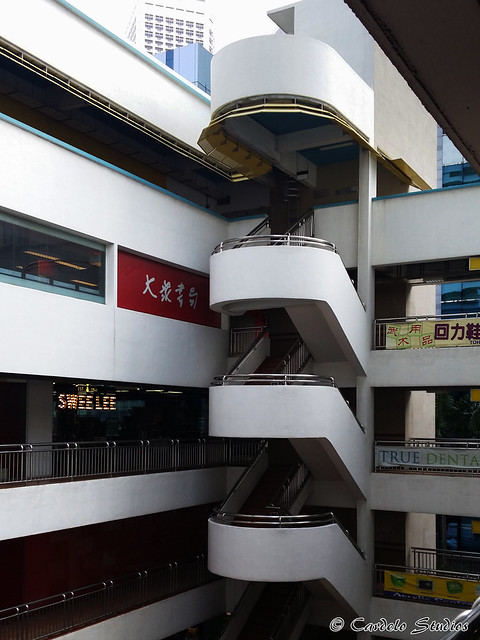 Two 25-storey slab blocks stand above the commercial podium, along with a playground. 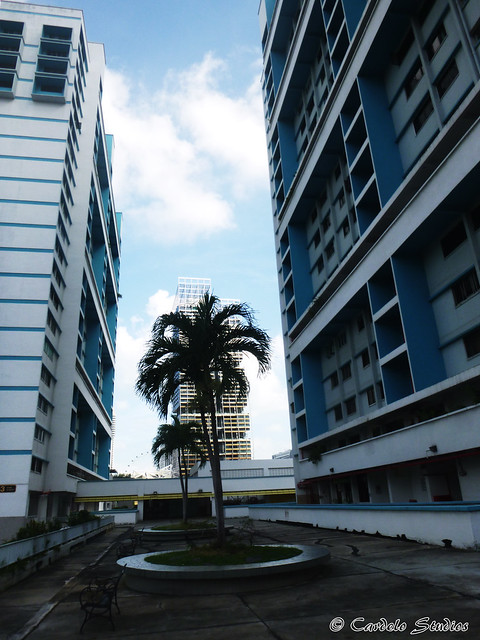 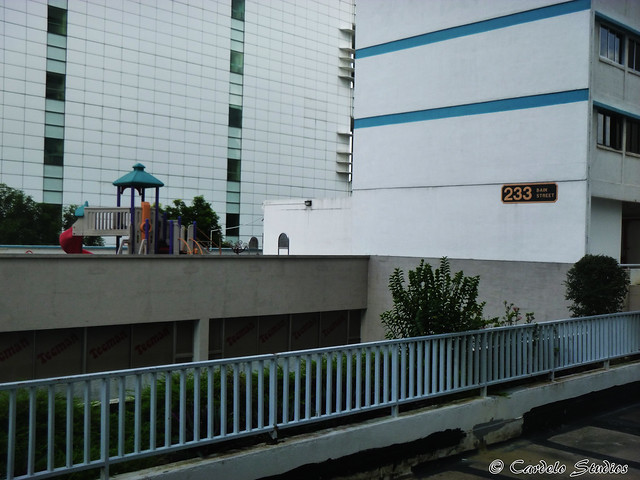 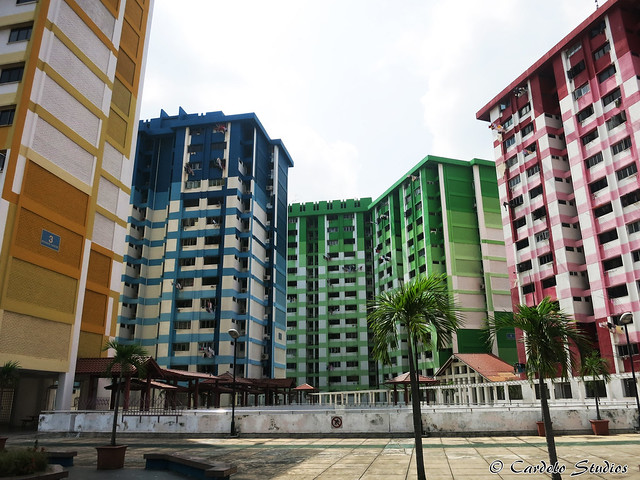 Rochor Centre was built to house residents relocated from the Kampong Glam area, and subsequently commercial tenants from Blanco Court as well. While it is located right next to the pedestrian-friendly Albert Mall, they are separated by a busy Rochor Road. As such, the design of the commercial podium does not relate to Albert Mall, with the exception of a main entrance aligned with Waterloo Street. Instead, most of the commercial activitie are located around the central courtyard of the podium. This forms a stark contrast to Cheng Yan Court, where the commercial activities are lined up along the streets, and the courtyard is occupied by a car park.

By the end of 2016, demolition for Rochor Centre will begin, to make way for the North-South Expressway. Read more about Rochor Centre here. 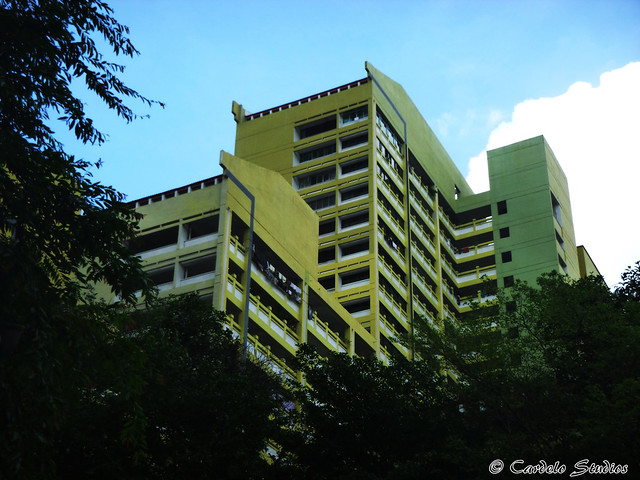 Cheng Yan Court stands directly in front of the Kwan Im Thong Hod Cho Temple along Waterloo Street, and the influence from the latter is apparent in many ways. Firstly, the main entrance and “atrium” space of the commercial podium is aligned to face the temple. Secondly, the roofs and railings of the entire complex were detailed to mimic the wooden roof rafters and stone railings that are sometimes seen in Chinese temples. Finally, the commercial podium is filled with shops that cater primarily to the Buddhist devotees who visit the temple. 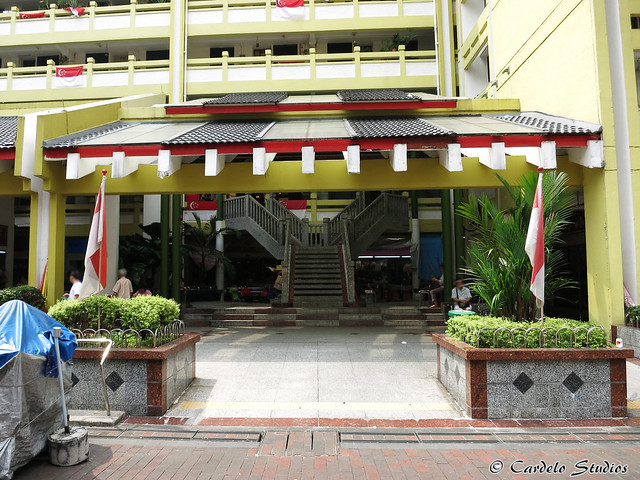 The main entrance aligned to face the Kwan Im Temple 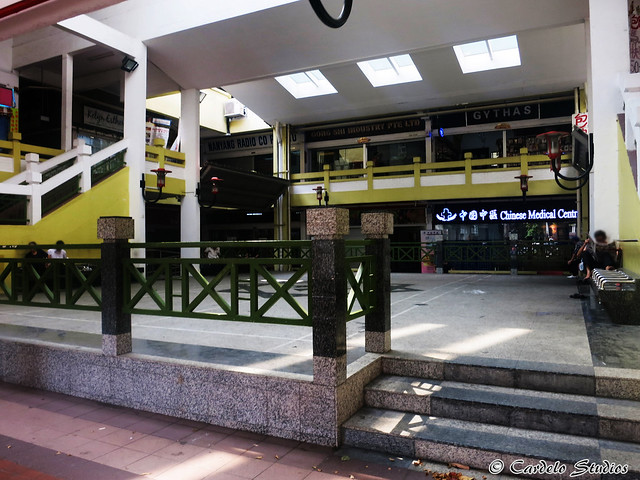 Unlike Bras Basah Complex, Cheng Yan Court does not have a void deck level located on the rooftop of the commercial podium. Instead, the commercial podium is topped with tiled pitched roofs. Through the use of staggering heights, the podium and residential blocks become a lot more visually integrated as compared to the other podium-and-tower complexes. 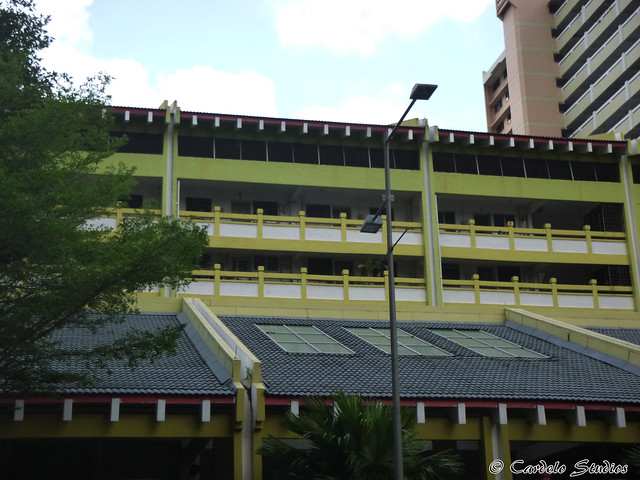 Uniquely Cheng Yan Court: the tiled pitch roofs, and the articulation of rafters and railings

Cheng Yan Court is named after Cheng Yan Place, located across Queen Street, connecting it to Victoria Street. It is named after businessman and philanthropist Lee Cheng Yan (李清渊), who founded the Hong Joo Chinese Free School in Serangoon Road, and was one of the original trustees of Gan Eng Seng Free School. He was also a founding member of the Ee Hoe Hean Club. His properties include four different villas scattered around Singapore (Magenta Cottage in Killiney Road, Hampstead Bath in Upper Bukit Timah, Mandalay Villa in Amber Road and a seaside bungalow in Changi Point). His son Lee Choon Guan, philanthropist and co-founder of the Chinese Commercial Bank, also has a road named after him. 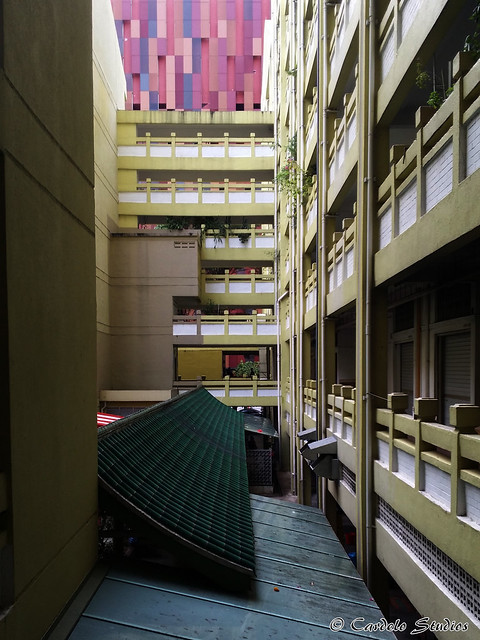 Before Cheng Yan Court was built, the Central Sikh Temple was located there. The temple, or gurdwara, was established in a temple at 175 Queen Street by a group of Sikhs in 1912. It was rebuilt in 1921, and subsequent plans to expand it did not materialise. The land was eventually acquired by the URA in 1977, and two years later, the temple moved to its temporary premise at the former Bukit Ho Swee Community Centre at Seng Poh Road. It eventually moved to its current location at Towner Road in 1986. 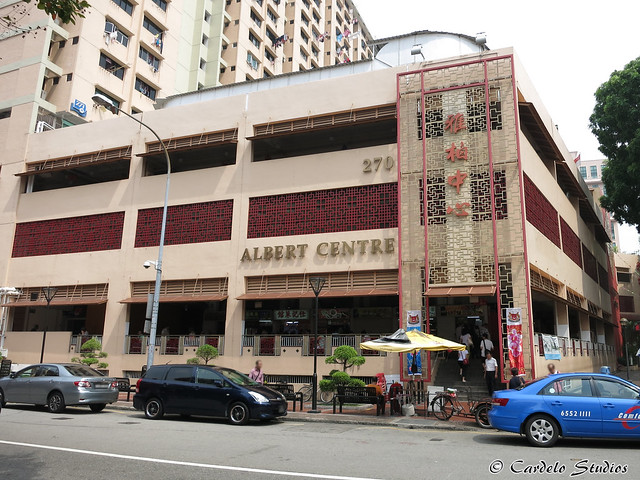 Albert Centre stands on the other side of Bencoolen Link, and is connected to Cheng Yan Court via two linkbridges. It consists of a single residential block standing over the market and food centre podium. 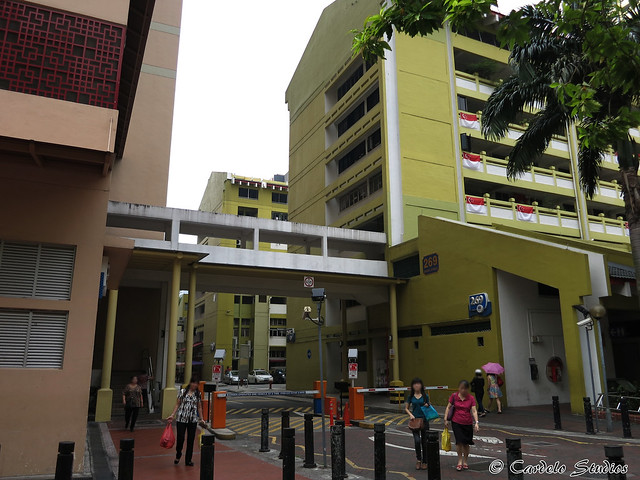 The Albert Centre Market and Food Centre is famous for its hawker meals and dried food. It took its name from the adjacent Albert Street. It was renovated from 2008 to 2010, during which a temporary market was set up further down Queen Street, at the junction with Ophir Road. As it was a temporary structure, conditions were not as adequate. As far as I can remember, the temporary market was dark and often packed, as it was a single-storey building serving the same number of patrons as the original multi-storey centre. The newly-renovated Albert Centre was much more conducive, and remains popular. 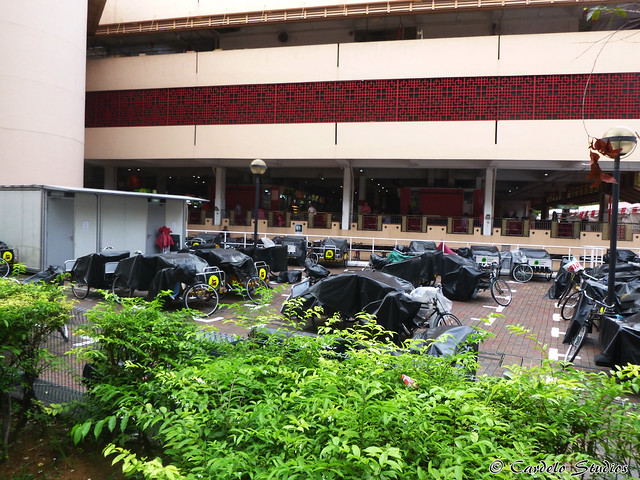 Trishaws parked in front of Albert Centre, along Albert Mall

There used to be a Lorong Kranji located on this site. It has since been expunged. 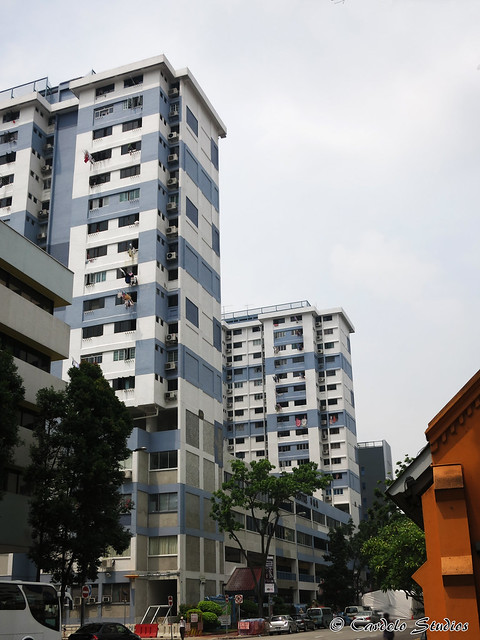 Waterloo Centre is yet another mixed-use HDB complex located between Queen Street and Waterloo Street (where it got its name from). However, it presents a very different scene from Cheng Yan Court and Albert Centre. While the latter two benefits from the large flow of human traffic along the pedestrianised Waterloo Street and Albert Street, Waterloo Centre stands isolated from its surroundings, and the 4-storey commercial podium, occupied by mostly hardware shops and motor spare part dealers, is often void of activities.

While the podium-and-tower typology was the predominant typology used in the public housing developments in sio poh, alternative typologies have been adopted, both by SIT and HDB, in the other developments.

Blk 405 is a single slab block that stood along Victoria Street, an oddity in the area. Little information can be found on this particular block, perhaps other than the Kwan Joo Heng Coffee Shop which was located on its ground floor, famous for its bak kut teh. The block was located next to Blanco Court, an office and shopping development which was later retrofitted into the Raffles Hospital building. The old Kampong Glam CC building was located behind the block, before being relocated to its current location next to the Golden Mile Food Centre. While Blk 405 was eventually demolished in the early 2000s, the CC building was retained and used as the Downtown Line Stage 1 office.

Stamford Estate was built by the SIT, and was located between Prinsep Street and Short Street. It consists of seven 4-storey walk-up blocks (Blk 1 to 7) and three 9-storey high-rise blocks (Blk 11 to 13). Blks 11 and 12, located between Rochor Canal Road and Albert Street (now pedestrianised), was known as Rochor House, while Blk 13, between Albert Street and the now expunged Prinsep Court, was known as Albert House. The 4-storey flats were similar in design to the SIT flats in Tiong Bahru.

Stamford Estate was selected for SERS in 1998, and the residents were relocated to the replacement flats at Blk 11 to 13 and Blk 15 Farrer Park Road in 2003. All the blocks were subsequently demolished, with the exception of Blks 2, 3 and 7, which were converted into a hostel for SMU’s students. Today, LASALLE College of the Arts stands on the grounds formerly occupied by the estate. A new road, McNally Street, was built in between LASALLE and the surviving flats. 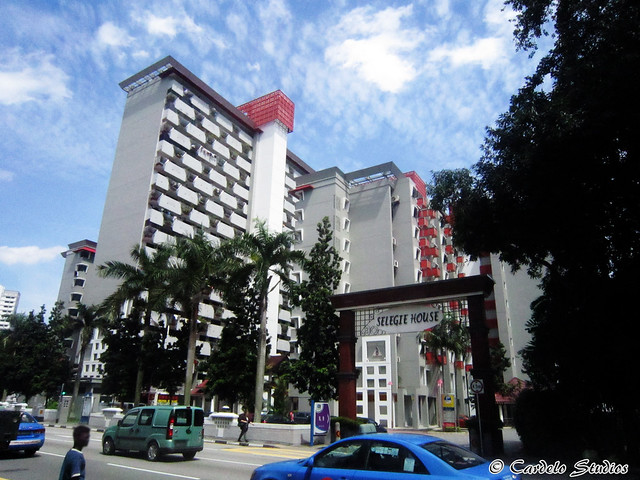 Selegie House was built in 1963, a year before the establishment of the Urban Renwal Unit. As such, its design did not entail a commercial podium, be it in the form of a connecting network (like in Outram Park) or a massive shopping complex (like most of the other examples above). Instead, the shops were simply located on the ground floor of each block, a strategy that would subsequently be adopted in many other housing estates around Singapore. When it was completed, Block 9 (at 20 storeys) was the tallest public housing development in Singapore.

Interestingly, the three blocks at Selegie House are numbered Blks 8, 9, and 10, complementing the block numbers at the adjacent Stamford Estate (Blks 1 to 7, and 11 to 13).

One response to “The HDB Complexes of Sio Poh”